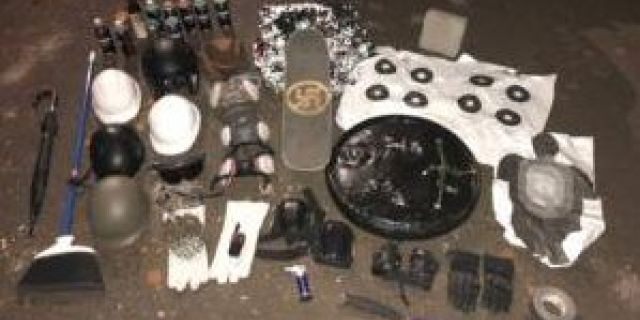 Portland police found items “consistent with” those used during unlawful civil unrest and riots after searching a vehicle near a demonstration in the Oregon city, authorities said.

Officers with the Portland Police Bureau spotted a car that was “creating a hazard” on Wednesday night near the Penumbra Kelly Building in the city’s southeast section, authorities said in a Thursday morning press release.

As police approached the vehicle, they discovered “several soup cans on top of the vehicle,” which police suspect appeared to have been intended to be thrown at officers.

“Inside the vehicle were several items consistent with what crowd members have used during previous unlawful assemblies and riots,” police said in the summary of events. “These items included shields, helmets, gas masks, CO2 cans, and paintball guns (photo).”

After searching the car, its owner allegedly refused to move it despite officers warning that it caused a safety hazard. Police ultimately cited the person and towed the vehicle.

Police also searched a second vehicle that was linked to the same group of demonstrators and found “several more items” similar to those used in the past during riots and unlawful assemblies, cops said. The second car was towed after the driver was allegedly found to be uninsured.

At least one person was arrested for trespassing on the Kelly building’s property during the night’s events, and two minors were detained but later released, police said.

Portland has been faced with nearly nightly protests for the past several months since the police-involved fatal shooting of George Floyd on May 25 in Minneapolis.

Demonstrations in Oregon’s largest city have often devolved into riots and have commonly targeted police and federal buildings and law enforcement.