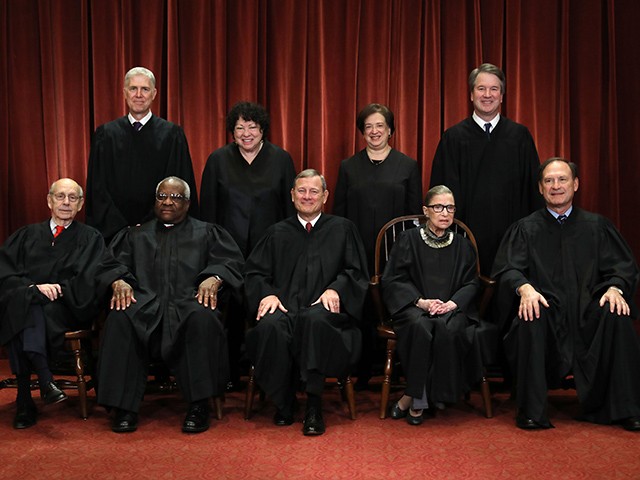 A vast majority of registered voters favor the “Keep Nine” amendment, establishing the number of Supreme Court justices at nine and thereby preventing the president and Congress from ever “packing” the highest court in the land.

The “Keep Nine” amendment simply states that the Supreme Court of the United States “shall be composed of nine Justices.”

A survey, conducted by McLaughlin and Associates from Sept 23 – 27 among 1,000 registered, likely voters, found that 62 percent favor the amendment, as opposed to the 18 percent who do not.

“Whether or not we can preserve an independent Supreme Court, or end up with a Court whose size could be manipulated for political advantage by whoever controls the White House and Congress will be a defining issue for the future of our nation,” Paul Summers, former Attorney General of Tennessee and “leader of the Keep Nine Amendment effort,” said in a statement.

“The independence and non-partisan nature of the Supreme Court of the United States is a core aspect of American government,” Riggleman said in a statement.

“I am proud to lead this bipartisan legislation that keeps the number of Supreme Court Justices at nine and ensures partisan desires to ‘pack the court’ won’t result in a Court that has been undermined by politics,” he continued.

Rep. Peterson added that it is “vital that we preserve” the independence of the Supreme Court.

“I worry that partisan attempts to change the size of the court will set off a judicial arms race which will further divide our country. If one party succeeds in packing the Court, the next party to hold a majority may choose to do the same in retaliation,” he explained, adding that his amendment will “preserve the integrity of the Court and permanently protect Americans from these dangerous proposals.”

Following the death of the late Justice Ruth Bader Ginsburg, Rep. Jerry Nadler (D-NY) suggested that Democrats “immediately move to expand the Supreme Court,” given the GOP leadership’s clear intention to move forward with President Trump’s nominee prior to the election:

Filling the SCOTUS vacancy during a lame duck session, after the American people have voted for new leadership, is undemocratic and a clear violation of the public trust in elected officials. Congress would have to act and expanding the court would be the right place to start.

Rep. Jim Jordan (R-OH) reacted sharply to Nadler’s threat, predicting that it would backfire on the left.

“I don’t think the American people like to be threatened,” Jordan said during an appearance on Sunday Morning Futures last week.

“I mean, Jerry Nadler said, if you move forward with this — with this nomination and the Senate is won by the Democrats in the election, that they’re going to pack the court. They’re going to add six new seats to the court and take it from nine to 15,” he added.

Sen. Lindsey Graham (R-SC), Senate Judiciary Committee chairman, hopes a vote for Judge Amy Coney Barrett could reach the Senate floor by October 26 — a week ahead of the presidential election.