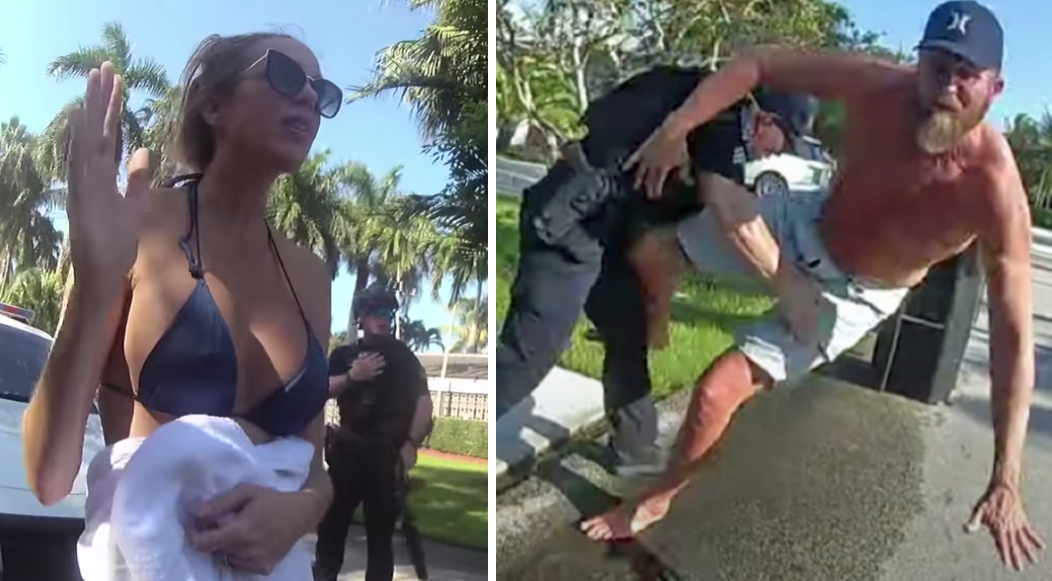 By Mario Ariza and Anthony Man

FORT LAUDERDALE, Fla. — Brad Parscale, former campaign manager to President Donald Trump, was in the middle of a standoff with police at his Fort Lauderdale home when unexpected help arrived: Officer Christopher Wilson, a personal friend.

The officer persuaded Parscale to step outside his home, allowing officers to knock him to the ground and detain him so that he could be sent for mental evaluation.

Fort Lauderdale police on Monday released body camera footage, a 911 call and records detailing how Sunday’s emergency unfolded. It started with his wife’s call for help, and police saw cuts and bruises on his wife that she said were caused by Parscale. Police body camera footage showed how officers knocked a shirtless Parscale to the ground outside his home and detained him.

Officers recovered 10 firearms from his home — including several pistols, a shotgun and rifle.

The encounter with police started Sunday afternoon on DeSoto Drive, where Parscale, 44, lives with his wife, Candice Parscale. The couple had argued, and Candice Parscale said her husband chambered a round into a pistol during a heated exchange between the two.

It’s unclear what they were arguing about, but she said she fled the house in fear and asked a real estate agent, who was about to show a nearby house, for help. The agent called the cops.

On the phone, Candice Parscale told a 911 dispatcher that she heard a gunshot shortly after exiting her home, and was afraid her husband was going to kill himself. Later, she told an officer she couldn’t be sure if it had been a gunshot, or a car backfiring.

“Oh no, did he do that? Oh my gosh, your arms, both your arms, has he been hurting you?” the real estate agent can be heard asking Candice Parscale, as they wait for the police.

She also told officers that Brad Parscale had been ‘stressed out” over the past two weeks and had made comments about shooting himself.

Candice Parscale also said Brad Parscale drinks and “suffers from PTSD,” and had a collection of guns inside the home, police said.

Officer Timothy Skaggs was the first to arrive at the neighbor’s house, records show. He said he witnessed bruising on Candice Parscale’s arm and face. She told him that the injuries had come from Brad Parscale, though she said she’d gotten them earlier that week.

Skaggs called Brad Parscale over a telephone, and found “Bradley’s speech was slurred as though he was under the influence of an alcoholic beverage and he seemed to be crying.”

“Can you come outside with no weapons please?” Skaggs said.

Instead, the 6-foot-8-inch-tall man, who once operated the digital political campaign reputed to have put President Trump in the White House in 2016, paced and raved, according to the police report.

Police converged on the neighborhood. A SWAT team arrived, along with a hostage negotiator. It’s unclear how long the standoff lasted.

But at some point, Fort Lauderdale police officer Christopher Wilson arrived on the scene. In police reports, Wilson describes himself as a “personal friend” of Brad Parscale, and it appears the bond between the two men was enough to convince the visibly agitated former Trump campaign manager to step out of his house.

As he exited, police ordered Brad Parscale — shirtless, but wearing shorts — to get on the ground. He didn’t comply, so an officer used a “double-leg takedown” to knock him to the ground while other officers handcuffed him.

“I called Brad on the phone and asked if he would come out and speak with me,” Wilson writes in a police report. Brad Parscale did step out of his house, and that’s when police swooped in, pinning him to the ground and detaining him.

Records show officers recovered 10 guns from inside the household, “including three long guns.”

Brad Parscale then was involuntarily committed for psychiatric evaluation under Florida’s Baker Act, a law that allows authorities to detain a person deemed mentally unstable and a danger to themselves or others at a mental health facility for up to 72 hours.

Parscale, who bought several Fort Lauderdale residences in 2018 and 2019 and relocated from Texas, is a complex figure in the Trump world.

He was in charge of digital operations for the 2016 campaign, where he worked closely with Trump’s son-in-law, Jared Kushner, and was elevated to campaign manager for the 2020 re-election.

He used the position to become a celebrity among Trump supporters, something highly unusual for a campaign manager, a job that in more orthodox campaigns isn’t nearly so prominent. He’d become a popular figure at the president’s rallies and was a celebrity speaker at Republican gatherings.

Delivering one of the warm-up speeches just before Thanksgiving last year at a Trump rally at the BB&T Center in Sunrise, Parscale assured the crowd that the president’s opponents wouldn’t be able to succeed in what he claimed were their objectives. Well before the rally began, when some people in the crowd spotted Parscale walking by, they started applauding, cheering and calling out his name.

As Biden continued leading Trump in the polls over the spring and summer, Parscale fell out of favor with Trump.

Parscale hyped a late-June Trump rally in Tulsa, Okla., with the campaign proclaiming 1 million people requested tickets and 100,000 would show up. The event was a bust, with only about 6,200 people showing up, embarrassing the president and angering Kushner and his wife, the president’s daughter, Ivanka Trump.

Meanwhile, Parscale was gaining attention for the campaign’s heavy spending and the lavish lifestyle he enjoyed while his companies benefited from Trump campaign money.

An ad in May from the anti-Trump Lincoln Project highlighted Parscale’s “$2.4 million waterfront house in Fort Lauderdale, two Florida condos worth almost $1 million each. He even has very own yacht, a gorgeous Ferrari, a sleek Range Rover.” The Lincoln Project bought ad time on Fox News in Washington, D.C., — to ensure Trump would see the spot and it would get under his skin.

Parscale was demoted in July.

The immediate reactions to the news about Parscale Sunday evening from the presidential campaigns in the polarized election year were strikingly different.

The Biden campaign’s “war room,” which provides the campaign’s quick responses to developments, reacted with sympathy for Parscale, posting on Twitter that, “This field is tough. It takes its toll on people in unfathomable ways. Regardless of the differences we have in our beliefs, we at the Biden War Room hope that Brad Parscale is safe, is with his family, and gets everything that he needs to get better.”

The Trump campaign, in a statement professing concern for Parscale, used the incident to attack Trump’s opponents. “Brad Parscale is a member of our family and we all love him. We are ready to support him and his family in any way possible. The disgusting, personal attacks from Democrats and disgruntled RINOs have gone too far, and they should be ashamed of themselves for what they’ve done to this man and his family,” Trump campaign communications director Tim Murtaugh said in a statement Sunday night.

Biden ‘Wants to Make Us Hide in Fear in Our Basements’