Home Blue Lines Woman drives through crowd of Trump supporters as they clash with BLM... 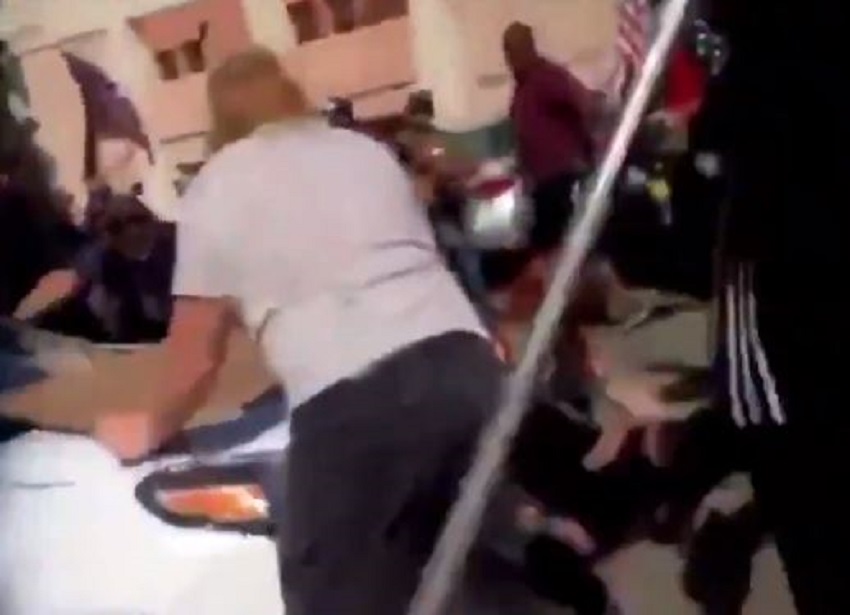 A woman was arrested Saturday on suspicion of attempted murder and assault with a deadly weapon after driving her car into a crowd during a demonstration in Yorba Linda involving protesters against police brutality and counter-demonstrators, authorities said.

Two people were injured in the incident, according to Sgt. Dennis Breckner of the Orange County Sheriff’s Department.

One man suffered two broken legs and was hospitalized and one woman suffered major and moderate injuries throughout her body, he said.

The driver of the vehicle was not identified.

The original protest was advertised as a march against police brutality, social injustice and systemic racism, according to a flier posted on Instagram by the Urban Organizers Coalition.

It was scheduled for 2 p.m. Saturday outside the Yorba Linda Library on Imperial Boulevard.

A counter-demonstration held by Trump supporters was slated to start at the same time. The two groups faced off with protesters on one side shouting “Black Lives Matter” and their counterparts yelling “U.S.A.,” according to the Orange County Register.

The Sheriff’s Department received multiple reports of physical altercations between the two groups, Breckner said. They also received reports that someone was displaying a firearm.

He estimated that there were a total of 250 people from both sides.

Shortly before 3 p.m. video posted on social media shows a white car driving into a group of people, many of whom were waving Trump 2020 and American flags.

“The people in the crowd that were hit were in the Trump support group,” Breckner said.

The Sheriff’s Department declared an unlawful assembly and put out an order for the crowd to disperse. One other person was arrested for refusing to disperse, but the area was mostly cleared by 4 p.m. and all streets are open, Breckner said.

One of the organizers of the Urban Organizers Coalition, who asked that her name not be used out of safety concerns, said later that her group had only been at the protest for a few minutes before Trump supporters crossed the street and came into the library parking lot where the protesters were gathering.

“We were not there to fight, or for violence, we were there to express our feelings and the community of Yorba Linda was not happy with us being there,” she said. Someone came up to her, she said, and told her, “I am a racist and you need to get out of my town. You need to go back where you came from.”

Later she said members of her group were sprayed with bear mace.

“Today was the most scared I have ever been,” she said.