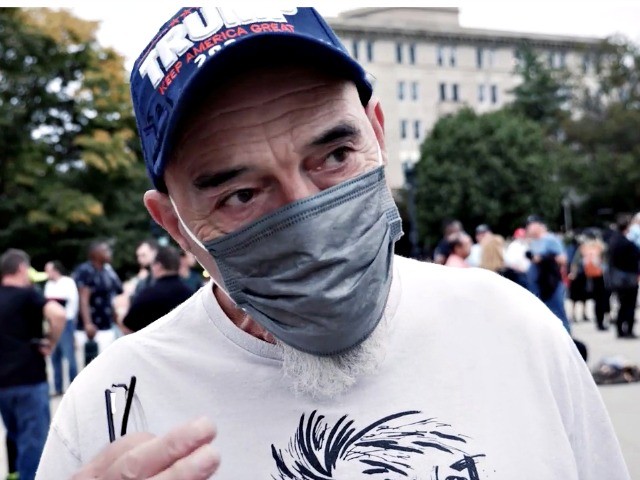 Trump supporters gathered outside the Supreme Court in Washington, DC, on Saturday following the president’s announcement of his nomination of Judge Amy Coney Barrett to fill the vacant seat.

A man identified as Fred told Breitbart News he was there to “show support for the president for making such a wonderful selection that my children will get a chance to know how great America is.”

“It won’t be ruined by the time they get grown up,” he continued.

In the Rose Garden Saturday afternoon, President Trump formally announced his nomination and introduced Judge Barrett as “a woman of unparalleled achievement, towering intellect, sterling credentials, and unyielding loyalty to the Constitution,” According to Breitbart News.

The 48-year-old is a Roman Catholic and mother to seven children, two of which she adopted from Haiti. Barrett’s youngest child has special needs.

In a statement following the announcement, Sen. Ted Cruz (R-TX) praised Trump’s nominee but warned that Senate Democrats would again try to “destroy her reputation for political gain.”

“In 2017, when she was nominated to the Seventh Circuit, my Democratic colleagues on the Senate Judiciary Committee interrogated Judge Barrett not for her record or her qualifications, but for her faith,” he said, calling it a “shameful exercise of religious bigotry.”

President of March for Life Jeanne Mancini called Judge Barrett “a role model for women and girls across the country,” according to Breitbart News.

Outside the Supreme Court, Fred expressed his gratitude to President Trump for choosing Barrett to fill the vacant seat left by the late Justice Ruth Bader Ginsburg.

“At my age, I’m so ashamed at what my generation has allowed and just so thankful that there’s an opportunity now to get it turned around. I praise God for that and I praise our President Trump for that,” he concluded.