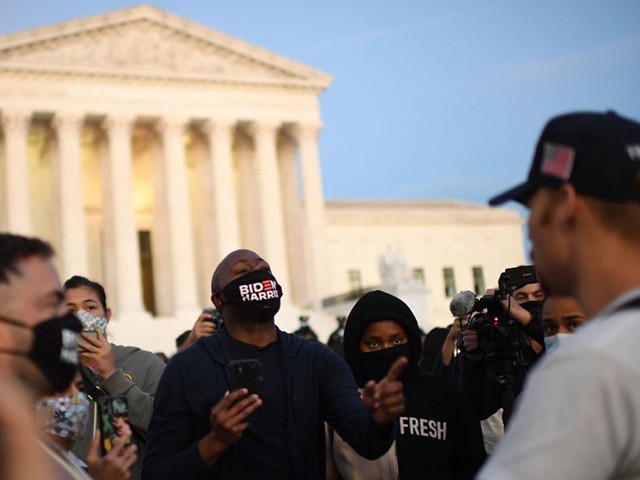 Left-wing groups, including MoveOn, Indivisible, NARAL Pro-Choice America, and the Sunrise Movement are launching protests at courthouses across the country to oppose the nomination of Amy Coney Barrett to replace Ruth Bader Ginsburg on the U.S. Supreme Court.

Beginning at 2 p.m. on Sunday in Washington, D.C., a protest will take place at the Supreme Court.

The protest, dubbed SCOTUS Rapid Response Action Guide, offers a wide range of guidance for protesters and also provides links so visitors to the guide can donate to Planned Parenthood to “protect RBG’s Legacy.”

The guide says, in part:

In this moment of overlapping crises — a global pandemic, mass unemployment, systemic racism, and climate change — the stakes of nominating and confirming a new Supreme Court Justice could not be higher. Supreme Court justices are appointed for life and as the highest court in the US, their rulings shape all of our lives — everything from abortion to segregation, transgender rights to climate change, big money in politics to healthcare. It is unjust and unacceptable to try to rush through a nomination less than 40 days from the election.

With our futures on the line, we must rise up to demand that US Senators stand on the right side of history and let the people decide on the next Supreme Court Justice of this country. We must demand no nomination before inauguration.  It’s our future and we should get to choose our justice.

The Google Document also includes suggested slogans to use on signs and social media, including “No Confirmation Before Inauguration,” “Racial Justice,” “A Green New Deal,” and “Reproductive Freedom.”

The guide instructs people about using social media and to also include in the post the hashtag #LetThePeopleDecide. Other hashtags are #OurCourts #OurFutureOurJustice #ProtectTheCourts #PeopleOverPolitics.

A link directs people to a MoveOn website seeking signatories for a petition that, on Sunday, had 1,290,955 signatures:

Donald Trump announced Amy Coney Barrett as his nomination for the Supreme Court of the United States.

He did this against Ruth Bader Ginsburg’s dying wishes and before she has even been laid to rest, while some states have already started voting, and with hardly a month to go until Election Day. This is an obvious attempt by the Republican Party and Trump to control all levers of power in this country and hold leverage over the election’s results. We cannot let this happen.

With less than 40 days until the election and voting already underway in many states, it’s important that we demand all senators pledge not to move forward with any nominee until after the next inauguration.