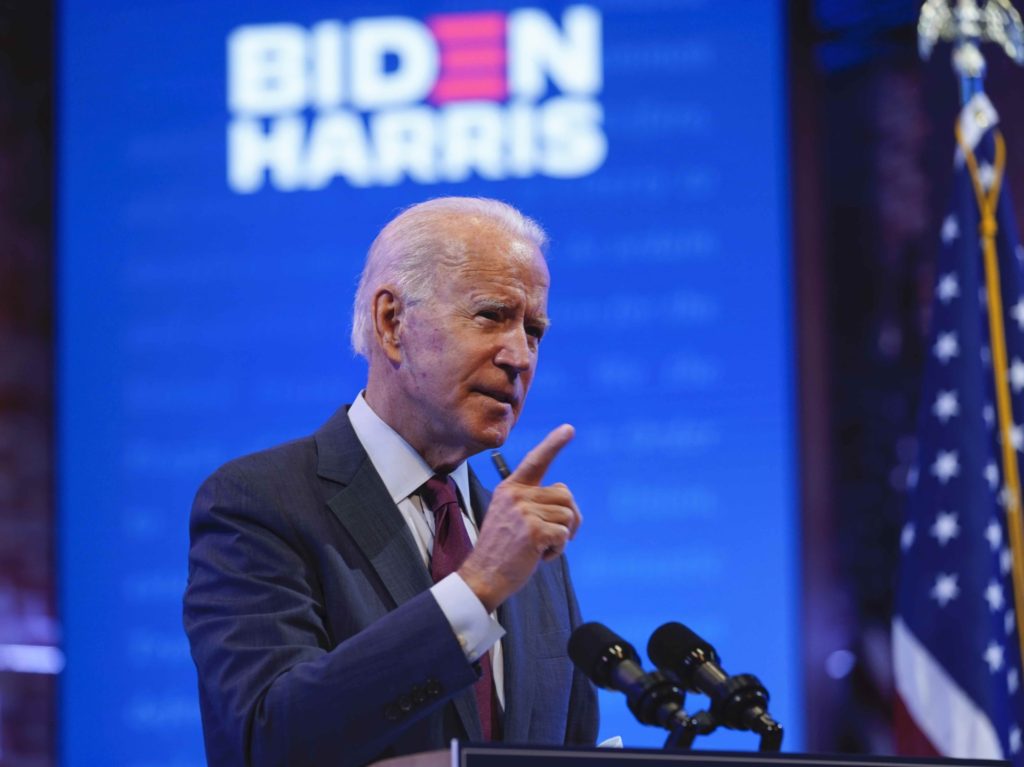 Former Vice President Joe Biden blasted Judge Amy Coney Barrett on Sunday, saying her past criticism of Chief Justice John Roberts for upholding Obamacare was a warning to American voters about Republicans’ agenda in her nomination.

Biden, offering his first public comments on Barrett since she was nominated Saturday, criticized President Donald Trump for nominating her before Justice Ruth Bader Ginsburg had been buried, and after Americans had started voting.

The former vice president and Democratic presidential nominee said that Trump’s real agenda was to destroy the Affordable Care Act (“Obamacare”), which currently faces a challenge that will be heard by the Supreme Court after the election.

Barrett, who was then a law professor at the University of Notre Dame, wrote in a law review article in 2017:

Chief Justice Roberts pushed the Affordable Care Act beyond its plausible meaning to save the statute. He construed the penalty imposed on those without health insurance as a tax, which permitted him to sustain the statute as a valid exercise of the taxing power; had he treated the payment as the statute did—as a penalty—he would have had to invalidate the statute as lying beyond Congress’s commerce power

That was a common view among conservatives, and it was the view expressed by the four dissenting justices.

Biden’s full remarks, as delivered, were as follows:

Yesterday, before Justice [Ruth Bader] Ginsburg could be laid to rest, and after hundred thousands [sic] of americans had already cast their ballots, the president nominated a successor to her seat.

It’s no mystery about what’s happening here. President Trump was trying to throw out the Affordable Care Act. And he’s been trying to do it for the last four years. The republican party has been trying to eliminate it for a decade. Twice already, the Supreme Court has upheld that law, the Affordable Care Act, and the Congress expressing the popular will of the American people, has rejected president trump’s efforts as well.

Now, all of a sudden, this administration believes they found a loophole in the tragedy of Justice Ginsburg’s death. It doesn’t matter to them [that] Republicans set the precedent just four years ago when they denied even courtesy of a hearing to President Obama’s nominee after Justice [Antonin] Scalia passed, after he had only passed away nine months prior to Election Day. Didn’t matter to them that millions of Americans already voting on a new president in a new Congress had begun. All that does matter is that they see an opportunity to overturn the Affordable Care Act on their way out the door. And as I speak, we are still in the midst of the worst global health crisis in a century, a crisis [that] has already taken over 200,000 lives. Between 750 and 1,000 lives a day and counting. And yet, the Trump administration is asking the Supreme Court right now as i speak, to eliminate the entire Affordable Care Act. The administration filed a brief in the Supreme Court that concludes, and I quote, “The entire ACA thus must fall.” “The entire ACA thus must fall.”

President Trump can claim all wants he’s going to protect people with preexisting conditions, but the fact is he’s already fighting to take those protections away as we speak. If he has his way, more than 100 million people with pre-existing conditions like asthma, diabetes, and cancer could once again be denied coverage. Complications from COVID-19 like lung scarring and heart damage could become the next flood of preexisting conditions used as an excuse to deny coverage to millions of people. Women could once again be charged higher premiums just because they are women. Pregnancy becoming a preexisting condition again. Seniors who see their prescription drug prices go up, and the funding for Medicare go down. Doesn’t matter — it doesn’t matter what the American people want. Pesident trump sees a chance to fulfill his explicit mission [sic]: steal away the vital protections of the ACA from countless families who have come to rely on them for their health, their financial security, and lives of those they love. President Trump just tweeted an hour ago, on my way here, and I quote, “Obamacare will be replaced with a much better and far cheaper alternative. If it is terminated in the Supreme Court, it would be a big win for the USA.”

It should come as no surprise that on Saturday, President Trump would nominate Judge Amy Coney Barrett and on Sunday, lay out clearly what his objective is: to terminate Obamacare. The judge has a written track record, written track record of disagreeing adamantly with the Supreme Court’s decisions on two occasions, upholding the ACA. In fact, not as a judge, but prior to going on the bench, she publicly criticized Chief Justice Roberts’ opinion upholding the law eight years ago. The American people understand the urgency of this moment. They’re already voting in droves because they know their health care hangs in the balance. They understand that if Donald trump gets his way, they could lose their right to vote, their right to clean air and water, their right to equal pay for equal work. Workers could lose their collective bargaining rights, “Dreamers” could be thrown out of the only country they have ever known, and women could use the bedrock enshrined in Roe v. Wade for 50 years.

People are voting right now because they know the very soul of this country is at stake, and because they know that the decisions of the Supreme Court affect their everyday lives. Their voices may not matter to Donald Trump, to Mitch McConnell, but there are Senate Republicans out there who know in their hearts that if they shut out the voices of those during a voting period, during an election, they’re closing the door on American democracy thereafter. This is where the power of the nation resides, in the people. In the rule of law. In precedents, we abide by. To subvert both, openly, and needlessly, even as Americans cast their vote, would be an irreversible step toward the brink and betrayal of a single quality that America has born and built on: the people decide.

The Senate has to stand strong for our democracy. They must not act on this nomination until the American people finish the process they’re [sic] already begun, of selecting their president and their Congress. But I’ve said before, if the people choose Donald Trump, then the senate should give his nominee a hearing and a vote. If the people do not choose Trump and choose me, President Trump’s nomination should be withdrawn. I should nominate, chosen by a president who’s just been elected, and by the people, to get a fair hearing, which would not even occur until early February, a confirmation vote. The U.S. constitution provides one chance. one, for the Americans to have their voices heard on who serves a lifetime appointment on the Supreme Court, who makes those big decisions about their health care, their civil rights, and much else. That chance is now. That moment is now. And the voters in my view, are not going to stand for this abuse of power. And for [inaudible] to call ourselves a democracy, their voices must be heard.

I urge the American people to keep voting, to let your current senators know that you want to be heard before a vote on confirmation of a new justice. And I urge every senator to take a step back from the brink, take off the blinders of politics for just one critical moment and stand up for the constitution you swore to uphold. This is a time to deescalate, to put an end to the shattering of precedents that’s thrown our nation into chaos under this president. Just because you have the power to do something doesn’t absolve you of your responsibility to do right by the American people. Uphold your constitutional duty. Summon your conscience. Stand up for the people. Stand up for our cherished system of checks and balances. Americans are watching. Americans are voting. And we must listen to them now. We must allow them to exercise this sacred power. So please, listen. Thank you, and God bless America. May God protect our troops, and I’ll take a few questions. yes, sir.

Biden’s argument that a justice has never been confirmed while an election is “underway” is partly a reflection of the fact that voters have never voted so early in quite such large numbers before. Supreme Court justices have been nominated 29 times during election years, and all but one were confirmed. Half of all presidents prior to Trump have made such a nomination.