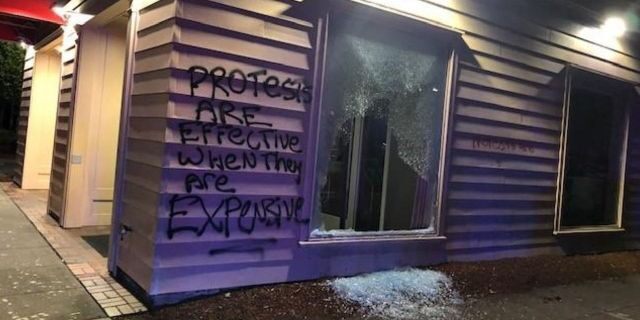 A Vermont man pleaded not guilty to federal civil disorder charges in Portland, Ore. on Friday, stemming from a June protest in the city during which he allegedly charged at police officers repeatedly with a shield, according to the U.S. Attorney’s Office for the District of Oregon.

Charles Randolph Comfort, 24, was indicted by a federal grand jury for allegedly charging the officers and kicking separate officers several times while under arrest for refusing the leave the scene.

Police were attempting to disperse protesters after an unlawful assembly was declared June 25 at an intersection near the Portland Police Bureau’s North Precinct. Demonstrators had started blocking traffic using dumpsters stolen from nearby businesses.

Fireworks were also thrown over the barricade of the precinct at officers stationed inside.

Vandalism during the June 25 protest for which Charles Randolph Comfort was charged with civil disorder.
(Portland Police Bureau)

The FBI and Portland Police Bureau investigated the case.