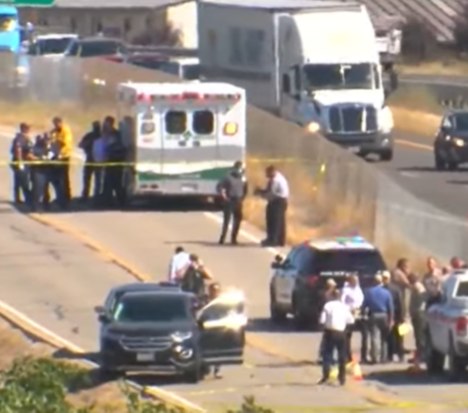 TEMPLETON, Calif. — A white supremacist gang member was killed in a gun battle with law enforcement after he ambushed and shot a deputy pursuing him Thursday near the Templeton Cemetery, Sheriff Ian Parkinson said at a news conference.

According to Parkinson, a sheriff’s deputy was driving in the Theatre Drive area around 10:20 a.m. when the deputy recognized the car of a wanted felon parked on the side of the road. The deputy made a U-turn and pulled up next to the vehicle, which was unoccupied.

The deputy then proceeded north and found the man walking on Cemetery Road off Theatre Drive near the Templeton Cemetery, Parkinson said. He said the deputy tried to make a pedestrian traffic stop, but the man took off running toward the cemetery.

The suspect hid behind a bush and when two deputies approached the area, he “ambushed the deputy,” Parkinson said.

“The suspect shot multiple rounds at the deputy, striking one deputy in the lower leg. And the deputies returned fire,” Parkinson said.

After shooting one deputy, the man fled from the cemetery to a nearby vineyard before circling back and attempting to enter his vehicle on Theatre Drive. However, by that point, more deputies had arrived, responding to calls that a deputy had been shot.


“The two additional deputies pulled up, engaged the suspect, who was still armed with a handgun, and engaged in a gun battle where the suspect was struck and pronounced dead at the scene,” Parkinson said.

According to scanner traffic, the suspect was down by 10:40 a.m.

The man had an outstanding felony warrant and a history of multiple weapons charges, Parkinson said. The Sheriff’s Office gang task force had been investigating the man as he was a known member of a white supremacist gang, Parkinson said.

“He is known by us, he is wanted by us and he was considered armed and dangerous,” Parkinson said.

Parkinson did not name the gang the man was involved with.

The Sheriff’s Office’s Major Crimes Unit and the California Highway Patrol are conducting an investigation with the help of the SLO County District Attorney’s Office. He said investigators were serving a search warrant at the suspect’s residence.

The shooting was the third to involve sheriff’s deputies in the past 4 months, Parkinson said, “which is very unusual for San Luis Obispo County.”

In two of the three cases, deputies were injured, and in all three, the suspects were killed.

On June 11, Mason Lira was shot and killed by police in Paso Robles after a two-day manhunt that left a homeless man dead and four law enforcement officers injured, including Deputy Nicholas Dreyfus, who was shot in the face.

On August 21, Scott Huffman of Bakersfield was shot and killed by sheriff’s deputies and CHP officers after he opened fire outside the Vons grocery store in Nipomo.

“Very tough to explain why we have a pattern of three in four months when we have such long periods of not having a shooting,” Parkinson said.

Parkinson said his office would release more information about the suspect by Friday morning.

As the shooting was unfolding on the nearby frontage road, a semi-trailer truck crashed on Highway 101 after a Paso Robles police officer stopped traffic on the freeway, according to the CHP.

As police officers and San Luis Obispo County Sheriff’s Office deputies approached the suspect downed in the shooting, a Paso Robles Police Department officer “tried to slow traffic down to keep (vehicles) out of the line of fire if more rounds were fired between law enforcement and the suspect,” CHP Officer Patrick Seebart wrote in an email.

“As the officer stopped southbound traffic on the freeway, the driver of the big rig driver swerved suddenly, causing his vehicle to jackknife,” Seebart wrote, tying up traffic.

No one was injured in the collision, according to the CHP.

Woman in labor makes her husband stop at elections office so...