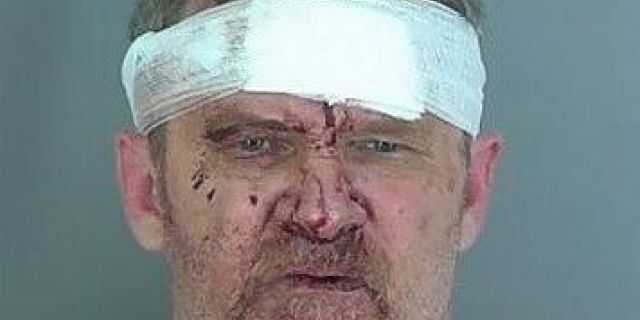 A group of fathers helped police arrest a registered sex offender accused of looking at a 15-year-old girl in the restroom of a Cracker Barrel in South Carolina, reports say.

Douglas Lane, 53, is facing charges of voyeurism, simple possession of marijuana and possession of drug paraphernalia stemming from a reported incident in Duncan on Sunday morning, according to Fox5 Atlanta.

Duncan police Chief Carl Long told WSPA that a 15-year-old girl at the restaurant reported seeing a man peering at her from underneath the bathroom stall.

The girl told her father what happened and an employee coaxed Lane out of the bathroom, the station adds.

Long told WSPA that the girl’s father confronted Lane and a witness said he went “running, sprinting out the front door” of the restaurant “with a very bloody nose.”

Long said Lane tried to flee, but was tackled and restrained by a group until police arrived, WSPA reports.

Lane’s phone reportedly was seized by police after it was found on the bathroom floor. One witness told WSPA that the 15-year-old wasn’t the only woman in the restroom at time.

“I’ll never forget the way they looked after,” that witness said. “They were traumatized.”

Government records show that Lane, of Charlotte, N.C., has been a registered sex offender in that state since 2004 because he was convicted of secretly looking into a room with 8- and 9-year-olds inside, according to Fox5 Atlanta.

He also was charged with crimes connected to peeping at least eight  other times, according to WSPA. Lane is reportedly being held on a $2,000 bond.

Trump Admin to Use Seized Iranian Oil to Help Families of...