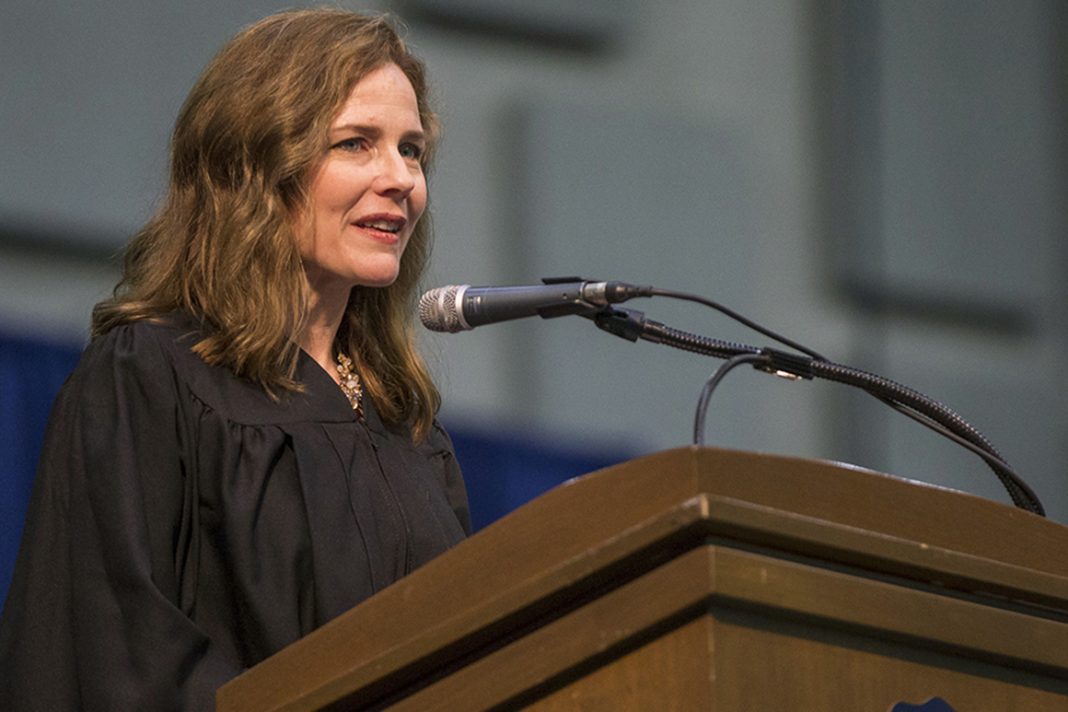 The two sides aren’t openly warring; instead, disagreements are surfacing in their attempts to bend the president’s ear and generate favorable media coverage for their preference. But the discord reflects the GOP’s conflicting priorities six weeks out from an election that Trump could well lose.

Barrett’s boosters include Marjorie Dannenfelser, who heads the anti-abortion rights group Susan B. Anthony List. She said she spoke with Trump Monday to make the case for Barrett. Also in Barrett’s corner is Tony Perkins of the Family Research Council, another group that opposes abortion rights. He said he had reached out to the White House to press for Barrett and another judge seen as less likely to be nominated, Allison Jones Rushing.

Perkins said he also raised concerns about Lagoa, whom he describes as a relative unknown. The fact that more than two dozen Democratic senators voted for her 2019 confirmation to her current seat has raised suspicions, Perkins said. (That bipartisan vote is a plus in the eyes of Lagoa’s backers.)

Perkins convened a conference call Monday with evangelical leaders and told POLITICO that the consensus of participants was in favor of Barrett and Rushing, but against Lagoa. While Barrett is a familiar figure after being previously considered by Trump for a Supreme Court seat, the concern is that a lesser-known jurist could end up deviating from conservative thought and leave activists feeling burned.

“I want to know where they stand, and I think that’s reflective of where social conservatives are,” Perkins said. “We worked too hard and for too long to miss at this point.”

But by bypassing Lagoa, political operatives say the president would forgo an opportunity to bolster his chances in Florida.

“Both would be great picks and would energize the Republican base. But with Lagoa, there is likely an immediate, tangible impact on a critical swing state in Florida,” said Phil Cox, the former executive director of the Republican Governors Association.

Some Trump political advisers argue it would be risky for Democrats to go after Lagoa given their prior vote for her as well as her ethnic background. They also express concern about Barrett’s writings before she became a judge indicating she opposes Roe v. Wade and the Affordable Care Act. Polls show both those issues are important to suburban women, who have broken hard against the president.

Democrats are also prepared to question Barrett about her reported membership in a far-right religious group that believes wives are subservient to husbands. The matter has been brought to the president’s attention, according to a Trump campaign adviser.

Within Trumps political orbit, there’s little desire to spend the final weeks of the election dwelling on these issues — especially abortion, which they fear it would further mobilize liberal activists, some of whom are currently lukewarm on Joe Biden.

“Do we want to be talking about this for the next 40 days?” said a Trump campaign adviser, who argued that Trump is already strong among evangelicals and that Lagoa is a conservative Catholic, too. “We have a choice: We can put Democrats on defense and let them explain why they’re reversing their votes on Lagoa and why they’re attacking a Latina.”

At the same time, Trump relishes culture war fights. And even Lagoa backers believe he might be drawn to Barrett because of the spectacle it would create when Democrats unload on her, including a hoped-for backlash from Catholic voters.

Top Florida Republicans close to the president — including Gov. Ron DeSantis, Sens. Marco Rubio and Rick Scott, and Rep. Matt Gaetz — have spread the word that Lagoa would be at least as good a justice as Barrett but would bring more political advantages.

The Trump campaign is also trying to make up lost ground in Arizona and pick up steam in Nevada, both states with large Latino electorates that advisers think would look favorably upon a Latina nominee. Another theory: picking a Latina could also allay concerns of white moderate voters put off by Trump’s harsh and sometimes racist rhetoric toward Hispanics.

Trump has made Cuban-American outreach — especially in Miami — a centerpiece of his strategy after underperforming among the demographic group in 2016. The president’s campaign is also courting anti-socialist conservatives and independent Latinos.

Recent polls have shown Biden lagging among Florida’s Hispanic voters, forcing his campaign to intensify its outreach to them.

“Assuming the qualifications of the [potential nominees] are about equal, and the calculation comes down to politics, Lagoa’s Florida residency could tip the scales,” said Neil Newhouse, who was the lead pollster on Mitt Romney’s 2012 presidential campaign.

The high court vacancy has emerged as a central topic of discussion between Trump and his political advisers. The president met Monday with three top reelection officials, Bill Stepien, Justin Clark, and Jason Miller. While the Supreme Court came up, no specific potential nominees were discussed, according to a person familiar with the conversation.

Trump’s outside allies, meanwhile, have begun polling to determine how Supreme Court-focused messaging will play in battleground states. The president’s campaign is also conducting polling.

There isn’t unanimous agreement among the president’s more pragmatic supporters that Lagoa would be the best pick. Some of them contend that Barrett would be a safer choice since she’s previously been vetted for the high court. Senate Majority Leader Mitch McConnell, who is overseeing the effort to protect the party’s imperiled majority, has told the president he prefers Barrett, according to a person familiar with the discussions.

Conservative activists contend that Barrett would make the most sense politically, saying that a Lagoa nomination would risk alienating Trump’s base ahead of the election.

“This isn’t a time to play it too cute or virtue signal or anything like that,” he added. “Trump and the GOP Senate were elected to put the most conservative originalist judges on the court. They should take this moment to do precisely that.”

To Perkins, the forthcoming pick is a matter near and dear to the hearts of conservatives who will determine Trump’s fate on Nov. 3.

“What the president needs and what the Senate needs is intensity among their base voters,” he argued. “This is turning the knob of intensity up about three clicks if he makes the right pick.”

Democrats privately acknowledge that Lagoa would be more of a challenge in that regard. But the official Democratic Party line is that there’s little difference between any of the potential Trump nominees.

“It doesn’t matter who he nominates because this president has been very clear about what his litmus test is: No. 1, will this nominee overturn Roe v. Wade? And No. 2, will this nominee overturn the Affordable Care Act,” said Stephanie Cutter, a veteran Democratic strategist who worked against confirming President George W. Bush’s high court picks and helped lead the effort to confirm President Barack Obama’s.

“And those two things combined are going to scare the heck out of suburban women voters across this country on Election Day.”