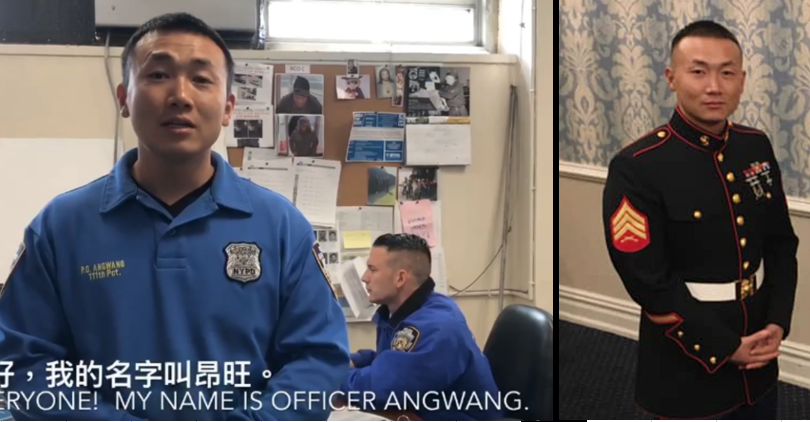 STATEN ISLAND, N.Y. — An NYPD officer who also served in the United States Army Reserve was arrested Monday and faces federal charges of acting as an illegal agent of the Chinese government, authorities said.

Baimadajie Angwang, 33, who was born in the Tibetan region of China, allegedly acted at the direction and control of Chinese government officials stationed at the consulate in New York City, according to officials, while spotting and assessing potential intelligence sources within the Tibetan community in New York and elsewhere.

Federal prosecutors said that Angwang, who most recently worked as a community liaison in the NYPD’s 111th Precinct in Queens, also provided “non-public information about internal operations of the NYPD” to People’s Republic of China (PRC) officials at the consulate and offered them access to senior NYPD officials through invitations to official events.

As part of his employment with the U.S. Army Reserve, Angwang maintained a “SECRET” level security clearance and allegedly lied on a background investigation form by denying he had contacts with a foreign government or its consulate, including his family members who live in the People’s Republic of China and are affiliated with the People’s Liberation Army, according to authorities.

“This is the definition of an insider threat – as alleged, Mr. Angwang operated on behalf of a foreign government; lied to gain his clearance, and used his position as an NYPD police officer to aid the Chinese government’s subversive and illegal attempts to recruit intelligence sources,” said FBI Assistant Director-in-Charge William Sweeney.

“The FBI is committed to stopping hostile foreign governments from infiltrating our institutions, and we will not tolerate the behavior of those who willingly violate their oath to the United States, and covertly work against their fellow citizens,” Sweeney said. “We want to thank the NYPD for its extraordinary partnership on this investigation.”

Since at least 2014, authorities allege Angwang reported the activities of Chinese citizens in the New York area and fed information about potential intelligence sources within the Tibetan community to his contacts.

One of the Chinese officials who worked at the consulate was part of the China Associated for Preservation and Development of Tibetan Culture, which is a division of the Chinese United Front Work Department partially dedicated to neutralizing opponents of the PRC.

Angwang allegedly texted the official at least 55 times between June 2018 and March 2020.

After inviting the official to the NYPD’s annual Asian Jade Banquet — a move the official was wary of — Angwang told the individual the consulate “should be happy instead . . . because, because you have extended your reach into the police department,” court documents show.

“Let them [superiors in Beijing] know you have recruited one in the police department,” Angwang told one of the officials, according to the documents, suggesting that official access to NYPD events would “raise our country’s soft power.”

NYPD Commissioner Dermot Shea said Angwang, “violated every oath he took in this country. One to the United States, another to the U.S. Army, and a third to this Police Department.”

“From the earliest stages of this investigation, the NYPD’s Intelligence and Internal Affairs bureaus worked closely with the FBI’s Counterintelligence Division to make sure this individual would be brought to justice,” Shea said.

At his initial court appearance, Angwang was ordered held without bail.

The Chinese consulate and Angwang’s attorney did not immediately respond to a request to comment.

“The defendant allegedly violated the trust of his community and the New York City Police Department on behalf of a foreign power, the People’s Republic of China,” said FBI Assistant Director Kohler. “This type of conduct simply cannot be tolerated.

“This case serves as yet another reminder that China represents the biggest counterintelligence threat to the United States and that the FBI and our partners will be aggressive in investigating and stopping such activities within our nation,” Kohler said.