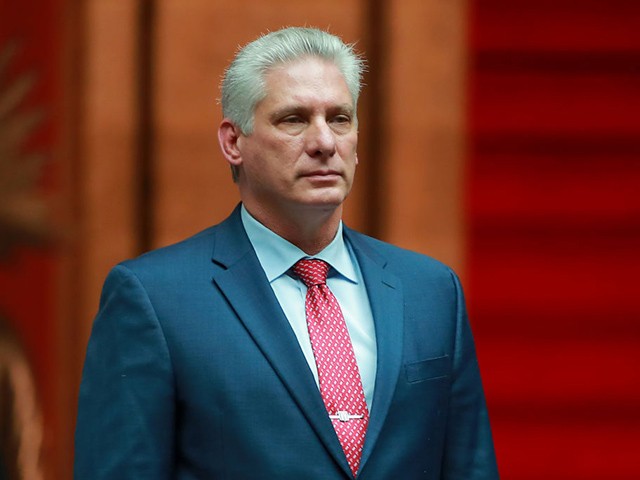 Cuba’s ceremonial president, Miguel Díaz-Canel, used his speech at the United Nations General Assembly on Tuesday to once again rail against the United States, accusing the Trump administration of “gangster blackmailing” and generally criticizing its response to the Chinese coronavirus pandemic.

In his second U.N. speech since assuming the office of “president” — subservient to dictator Raúl Castro — in 2018, Díaz-Canel boasted about the mobilization of Cuba’s slave doctor trade in response to the pandemic. Many of these doctors were sent to Venezuela, Cuba’s close left-wing ally.

“While the U.S. government is ignoring the call to combine efforts to fight the pandemic and it withdraws from the W.H.O. [World Health Organization], Cuba, in response to requests made to it, and guided by the profound solidarity and humanistic vocation of its people, is expanding its cooperation by sending over 3,700 cooperation workers distributed in 46 medical brigades to 39 countries and territories hit by COVID-19 [Chinese coronavirus],” Díaz-Canel said.

“In this sense, we condemn the gangster blackmailing by the U.S. to pressure the Pan-American Health Organization so as to make that regional agency a tool for its morbid aggression against our country,” he continued. “As usual, the force of truth shall do away with lies, and facts and protagonists shall go down in history as they should. Cuba’s example shall prevail.”

Cuba’s slave doctor trade is part of the regime’s use of medical diplomacy to develop and maintain ties with countries around the world. Since the Castro regime seized power in 1957, tens of thousands of Cuban doctors have been sent on humanitarian missions to over 90 countries, with profits from their work going back Havana while they live on a meager stipend.

The Pan-American Health Organization (PAHO) is complicit in this trade, having signed a “scholarship” program with Brazil to help Cuba traffic thousands doctors to Brazil under its former socialist government, generating some $75 million in profits. The PAHO’s participation in the deal helped Brazil avoid sanctions imposed on the Cuban regime.

Díaz-Canel also warned that the U.S. is planning to step up its blockade and sanctions against Cuba over the next few months after the Trump administration rolled back former President Barack Obama’s thaw with the communist country.

“The U.S. government is not hiding its intention to enforce new and harsher aggressive measures against Cuba in the next few months,” he declared. “We state once again before the international community that our people, who take pride in their history and are committed to the ideals and achievements of the Revolution, shall resist and overcome.”

Díaz-Canel also reiterated Cuba’s steadfast opposition to all U.S. foreign policy, particularly with regard to sanctions against Venezuela, Iran, Nicaragua, and North Korea.

“These attempts at imposing neocolonial domination on our America by publicly declaring the present value of the Monroe Doctrine contravene the Proclamation of Latin America and the Caribbean as a Zone of Peace,” said Díaz-Canel.

Cuba’s top diplomat in Washington admitted to Agence France-Presse this year that Trump’s reelection would be the “worst” possible scenario for the communist regime.

“If the Republicans win … it’s a very negative scenario,” said Carlos Fernandez de Cossio, the foreign ministry’s general director for U.S. relations. “It would mean at least a continuation of the policy of aggression against our country.”