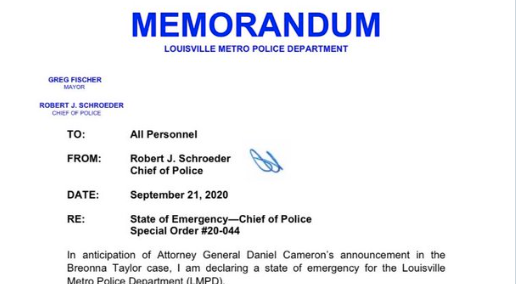 The Louisville Metro Police Department declared a state of emergency on Monday ahead of a highly anticipated decision by a grand jury to hand down indictments in the Breonna Taylor case.

.@LMPD has declared a “state of emergency” in preparation for decision in Breonna Taylor case. pic.twitter.com/Uuym6epBWO

The decision was announced by LMPD Interim Chief Rob Schroeder to ensure the city has necessary “staffing to provide for public safety services,” according to WAVE 3 News.

The department had previously announced all officers’ requested days off and unapproved vacation time were cancelled since the announcement of the grand jury’s decision was expected soon.

Taylor, 26, was shot and killed by Louisville police officers at her apartment in March. Her death has been cited as one of the many that have inspired more than 100 days of protest in the Kentucky city.

Kentucky Attorney General Daniel Cameron’s office declined to confirm to WAVE 3 News whether the Taylor case was being presented to a grand jury.

WAVE 3 News previously reported that federal buildings in Louisville would be closed this week ahead of a possible grand jury decision. Federal law enforcement have also been dispatched to the city to guard federal installations.