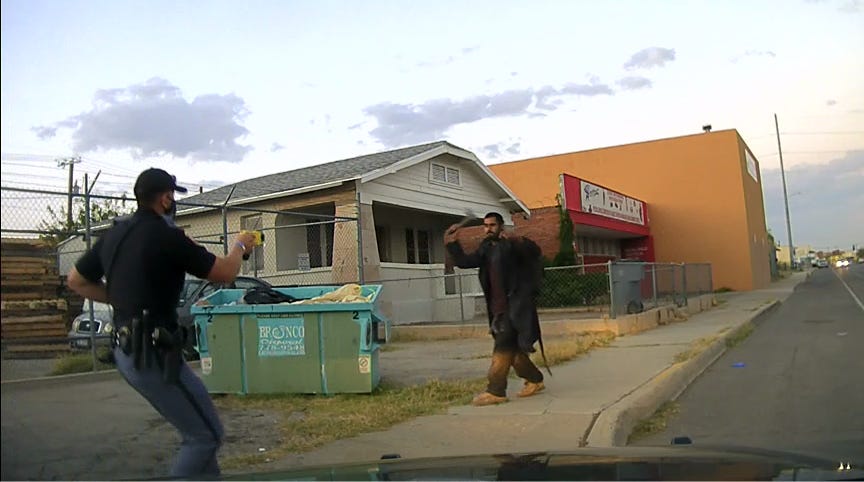 An El Paso man was arrested after allegedly attacking a police officer with a hatchet following a liquor store theft Wednesday evening in the Five Points neighborhood.

Rodney Raymond Zavala, 29, is accused of throwing a hatchet at a police officer who found him drinking a bottle of stolen liquor. The officer was not hit by the hatchet.

At 7 p.m., a police officer was flagged down regarding a theft at the Barrel House liquor store on Montana Avenue near Piedras Street close to El Paso Police Headquarters, a police news release stated.

The Police Department released photos of the confrontation filmed by a police car dashboard camera.

The officer, who was alone, found Zavala, who was “drinking a bottle of the stolen liquor as the officer approached,” police stated.

Police said Zavala ignored the officer’s orders, threw the bottle and reached into his waistband.

Photos show the officer aiming a Taser stun gun at Zavala as he pulls out a hatchet.

The officer fired the stun gun at Zavala but the Taser had no effect, police said. The suspect raised the hatchet over his head and threw it at the officer but it bounced off the car. No shots were fired.

“In the time it took the officer to retreat to his patrol car and transition to his handgun, the immediate deadly threat was no longer present as the hatchet skipped off the car and landed in the roadway,” police said in a statement.

Zavala, who has bloodshot eyes in his jail booking photo, was arrested on charges of aggravated assault on a public servant and theft under $100. He was booked into the El Paso County Jail in Downtown on under a bond of more than $100,000.

He was also booked on bond revocation warrants on two counts of criminal trespass, drug possession and resisting arrest, according to a jail log.