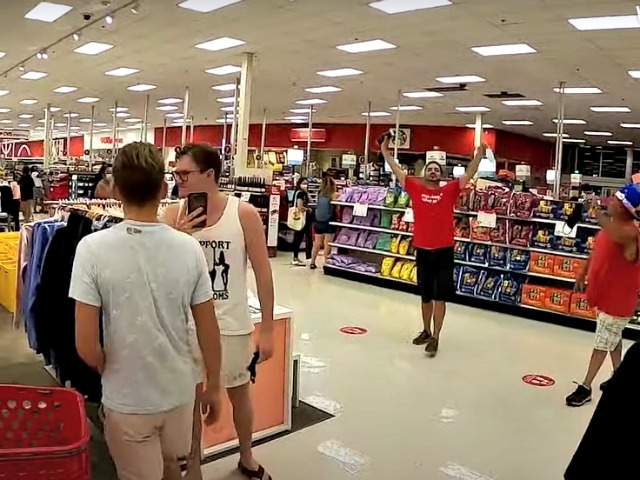 A group of anti-mask demonstrators marched through a Florida Target to Twisted Sister’s “We’re Not Gonna Take It,” encouraging others to liberate their faces by removing their masks.

The group reportedly marched through a Target in Ft. Lauderdale on Tuesday, encouraging shoppers around them to take off their masks as well:

“Alright. We’re tired of shopping with masks on,” Chris Nelson, who organized the event, said while holding up his phone as “We’re Not Gonna Take It” began to play in the background.

“And now, we’re taking our masks off because we’re done with it,” he said as others began taking their masks off in the store.

“Breathe. Breathe. You’re Americans. Breathe,” one woman said as she marched through the store.

Cristina Gomez, the Florida woman who made headlines after speaking out against a mask mandate before the Palm Beach County Commission meeting over the summer, was among the protesters. During the meeting, she stated that masks are killing people and told commissioners that “We the People are waking up” while warning against the “devil’s law.”

“Take off that mask. That’s the only way it’s going to work if we all unite!” she exclaimed. “It’s all about choice.”

Video shows the group marching through the store singing along to the song.

“We’re not gonna take it anymore,” they sang as they marched through the aisles, encouraging others to join them.

One shopper briefly joined the protesters, taking off her mask and dancing as they cheered.

“We’re not gonna take it anymore,” she exclaimed. Shortly after, another woman took off her mask, earning her a “you go girl, alright!” from a member of the group.

“This is America,”  a man said as the group eventually exited the store.

One protester, Nathan Babcock, told the HuffPost they decided to make a statement because they have had “no voice in what is being done to us.”

“If you want to wear a mask and think [it] makes you safer … That’s absolutely your right, 100 percent. Just don’t force me to wear a mask,” he added.

Target is one of several major retailers that require customers to wear a face-covering in stores.

“While nearly 90% of our stores already require guests to wear masks or face coverings due to local and state regulations, we’ll be expanding that requirement to include guests at all stores nationwide as of Aug. 1,” Target announced in July.

“For those without a mask, team members will provide disposable masks free-of-charge,” the announcement continued. “Young children and those with underlying medical conditions will not be required to wear a mask.”