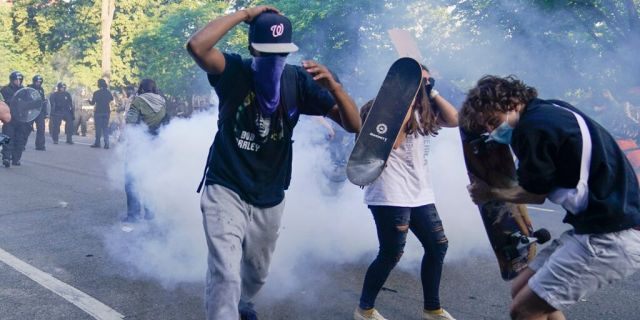 A senior military police officer in the Department of Defense for the D.C. region has questioned whether the National Guard had access to a military heat-ray mechanism that could have been used to disperse protesters outside the White House on June 1.

Documents obtained from the whistleblower, Maj. Adam DeMarco of the D.C. National Guard, show that the Provost Marshal of Joint Force Headquarters National Capital Region copied him on an email, inquiring about a long range acoustic device known as LRAD, as well as an Active Denial System (ADS), NPR reported.

TRUMP SAYS HE HAD ‘A SHOT’ TO TAKE OUT SYRIA’S ASSAD, BUT EX-DEFENSE CHIEF MATTIS OPPOSED IT

The ADS is a controversial device designed by the military 20 years ago that heats human skin once it comes into direct contact with it, making people immediately want to flee an area.

The mechanism was designed to disperse crowds or targets, without the use of lethal force, NPR reported.

“ADS can provide our troops a capability they currently do not have, the ability to reach out and engage potential adversaries at distances well beyond small arms range, and in a safe, effective, and non-lethal manner,” the Provost Marshal’s email said. “The ADS can immediately compel an individual to cease threatening behavior…[and] provides a sensation of intense heat on the surface of the skin.”

Demonstrators, who had gathered to protest the death of George Floyd, begin to run from tear gas used by police to clear the street near the White House in Washington, Monday, June 1, 2020. (Associated Press)

“The effect is overwhelming, causing an immediate repel response by the targeted individual,” the email reportedly added.

DeMarco, who has sought whistleblower protection, said that “the D.C. National Guard was not in possession of either an LRAD or an ADS,” so neither were used against protesters.

The email that DeMarco was copied on, was sent out the same day that tear gas and smoke grenades were used on the protesters near the White House, prior to President Trump posing with a Bible outside St. John’s Episcopal Church on 16th Street, the area that has since been named Black Lives Matter Plaza.

The recent protests were not the first time government officials have considered using the ADS device outside of military use.

But Nielsen “would not authorize the use of such a device,” and stressed that “it should never be brought up again in her presence,” an aide said, according to the Times.

Scarborough Rips the ‘Stupidity’ of Trump Supporters Being Anti-Mask — ‘It...