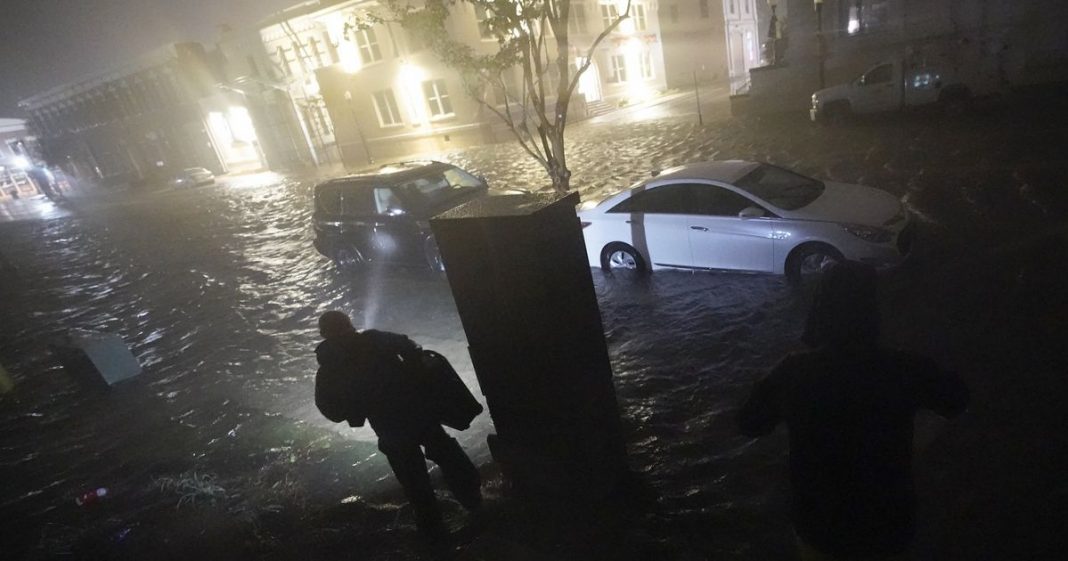 Two large casino boats broke loose from a dock where they were undergoing construction work in Alabama. Other boats docked at a pier in Pensacola sank.

Mississippi Gov. Tate Reeves urged people in the southern part of his state to prepare for the potential for flash flooding.

President Donald Trump issued emergency declarations for parts of Florida, Alabama, Mississippi and Louisiana. White House press secretary Kayleigh McEnany said on Fox News Channel that Trump was in contact with the states’ governors and ready to help “in every way possible.”

As of 5 p.m., Sally’s center was moving northeast at 7 mph, and it was located about 55 miles north-northeast of Pensacola. The storm had top sustained winds of 60 mph, according to the National Hurricane Center.

Forecasters say Sally’s core will move across southeastern Alabama overnight and over central Georgia on Thursday before sweeping over South Carolina. As the storm continues to weaken, Sally is expected to become a tropical depression sometime Wednesday night or Thursday morning.

Sally made landfall 5:45 a.m. as a Category 2 hurricane with maximum sustained winds of 105 mph, the National Hurricane Center said. Sally’s northern eyewall had raked the Gulf Coast with hurricane-force winds and rain from Pensacola Beach, Florida, westward to Dauphin Island, Alabama, for hours before its center finally hit land.

So.. a portion of the three mile bridge in Pensacola is missing… good grief.

Late Wednesday morning, the U.S. Coast Guard began flying helicopters over the Gulf Coast to check for anyone in distress. The agency had no immediate reports of any distress calls or search-and-rescue incidents.

As many as 500,000 people have been reported to be without power, according to the poweroutage.us site.

Even inland areas got hit hard by #Hurricane #Sally. This gas station is in Foley, Alabama. #HurricaneSally2020

Besides downed power lines, the storm is leaving massive damages to buildings and homes, and major flooding in its wake. In Pensacola, Fla., one reporter said the city recorded its third-highest storm surge in recorded history.

3rd highest Storm Surge on RECORD here in Pensacola, FL. Still hours from high tide. What a mess! Not out of the woods yet. #Sally

Escambia County Sheriff David Morgan said the storm knocked out a section of the new Three Mile Bridge in Pensacola as the storm pounds the Gulf Coast with wind and rain.

The storm tore loose a barge-mounted construction crane, when then smashed into the new Three Mile Bridge over Pensacola Bay, causing a section of the year-old span to collapse.

Sally also tore away a large section of a newly renovated fishing pier at Alabama’s Gulf State Park and knocked out power to a half-million homes and businesses across the region.

Street lights were knocked out in downtown Mobile, a city of about 190,000, where a stoplight snapped, swinging wildly on its cable. Trees were bent over as the rain blew sideways in the howling wind. In downtown Pensacola, car alarms went off, the flashing lights illuminating the floodwaters surrounding parked cars.

An emergency crew rescued two people on Dauphin Island, Alabama, after the hurricane ripped the roof off their home and the rest of the house began to crumble.

“As things started to peel off and fall apart, they got scared and called for assistance,” Dauphin Island Mayor Jeff Collier told the Associated Press by phone. He said no one was injured.

Fort Morgan, Alabama, reported winds of up to 121 mph around the time of landfall.

“It’s not common that you start measuring rainfall in feet,” said National Weather Service forecaster David Eversole in Mobile, Ala. “Sally’s moving so slowly, so it just keeps pounding and pounding and pounding the area with tropical rain and just powerful winds. It’s just a nightmare.”

The storm continued pummeling the Florida Panhandle and south Alabama late into the morning with sideways rain, beach-covering storm surges and strong winds, and its slow pace promised a drawn-out drenching and possible record floods.

A curfew was called in the coastal Alabama city of Gulf Shores due to life-threatening conditions. In the Panhandle’s Escambia County, Chief Sheriff’s Deputy Chip Simmons vowed to keep deputies out with residents as long as physically possible. The county includes Pensacola, one of the largest cities on the Gulf Coast.

“The sheriff’s office will be there until we can no longer safely be out there, and then and only then will we pull our deputies in,” Simmons said at a storm briefing late Tuesday.

This for a storm that, during the weekend, appeared to be headed for New Orleans. “Obviously this shows what we’ve known for a long time with storms – they are unpredictable,” Pensacola Mayor Grover Robinson IV said.

Winds from Hurricane #Sally have been howling for hours and we lost power overnight here in Daphne, Alabama. I’ll see you on @weatherchannel 9am-1pm CT.

After dumping rain on the coast Wednesday, Sally was forecast to bring heavy downpours to parts of Mississippi, Alabama, Georgia and the Carolinas later in the week.

Stacy Stewart, a senior specialist with the National Hurricane Center, said the Category 2 hurricane might make history for rainfall.

The hurricane will bring “catastrophic and life threatening” rainfall over portions of the Gulf Coast, Florida Panhandle and southeastern Alabama through Wednesday night, he said. Stewart said the hazards associated with the hurricane are going to continue after it makes landfall, with the storm producing heavy rainfall Wednesday night and Thursday over portions of central and southern Georgia.

“This is going to be historic flooding along with the historic rainfall. If people live near rivers, small streams and creeks, they need to evacuate and go somewhere else.”

– Stacy Stewart, a senior specialist with the National Hurricane Center

The following are safety tips from FEMA for during a hurricane.

Sally was a rare storm that could make history, said Ed Rappaport, deputy director of the National Hurricane Center.

“Sally has a characteristic that isn’t often seen and that’s a slow forward speed, and that’s going to exacerbate the flooding,” Rappaport told The Associated Press.

“It’s not common that you start measuring rainfall in feet.”

He likened the storm’s slow progression to that of Hurricane Harvey, which swamped Houston in 2017. Up to 30 inches of rain could fall in some spots, and “that would be record-setting in some locations,” Rappaport said in an interview Tuesday night.

Some strengthening is forecast during the next few days, and Teddy is likely to become a major hurricane later Wednesday and could reach Category 4 strength Thursday.