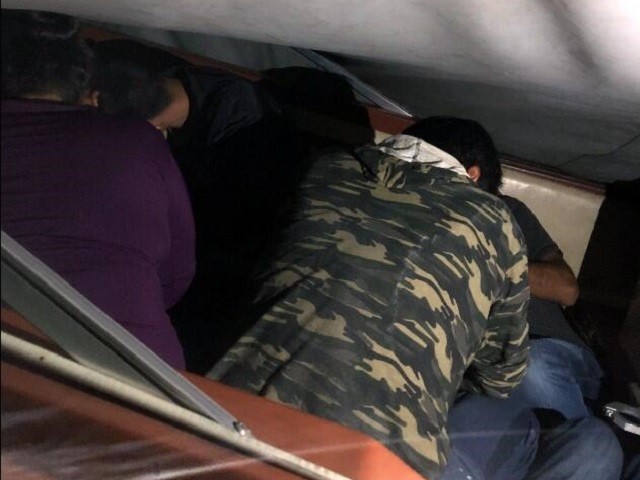 Yuma Sector Border Patrol agents discovered eight migrants packed in a boat being towed by an SUV at an interior immigration checkpoint in California.

Border Patrol agents assigned to the Highway 78 Immigration Checkpoint near Palo Verde, California, observed a 1999 Ford Expedition towing a fishing boat approaching for inspection. During an initial inspection, a Border Patrol K-9 alerted to an odor it is trained to detect coming from the boat, according to information obtained from Yuma Sector Border Patrol officials.

The agents referred the driver, a 33-year-old male U.S. citizen, to the secondary inspection area. Agents searched the boat and found eight illegal immigrants hiding under the boat’s covering, officials reported. The migrants were packed on top of each other and had no personal protection equipment to prevent the possible spread of COVID-19, the photograph revealed.

Agents conducted an immigration interview with the eight occupants of the towed boat and identified them as Mexican nationals. One of the Mexicans had been previously deported at least four times, officials stated.

The agents arrested the driver and seized the boat, trailer, and SUV. The driver will face federal felony smuggling charges.

The agents then transported the eight Mexican nationals to a rally point where they would receive a medical screening and criminal background investigation. Once cleared, agents will expel the migrants to Mexico under Title 42 Coronavirus protection protocols put in place by the Centers for Disease Control and Prevention. CBP officials report most migrants are expelled within two hours of being apprehended in order to limit exposure to CBP personnel and other migrants.

“Human smugglers are part of a sophisticated criminal enterprise that cares only about the profit to be gained from smuggling illegal aliens,” Yuma Sector officials said in a written statement. “Smugglers view them as nothing more than freight.”

“In this case by transporting people in a fishing boat not designed to safely transport people while being towed,” the statement continued. “There are no proper restraints, and occupants can be injured or killed during an accident.”