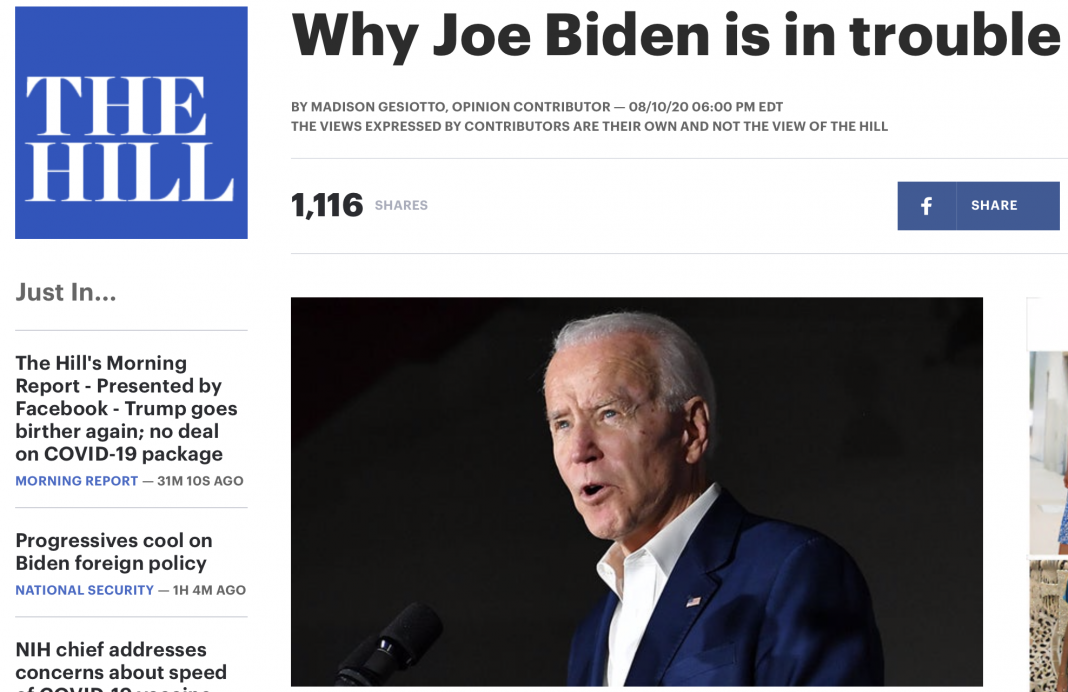 The Hill is known for its high-metabolism national political coverage, wonky Washington D.C. reporting, but also for a sprawling opinion section that often serves as a landing pad for campaign staffers passing off what are effectively ads as op-eds.

Ahead of the 2020 presidential election, the presence of such posts seems to be increasing. One striking opinion piece that exemplifies the phenomenon was published on August 10 and written by Trump campaign advisory board member Madison Gesiotto. It reads like a literal Trump campaign press release.

“Biden also decided last week not to attend the Democratic convention, his political coronation ceremony that would have really pushed him from the basement and out in front of a real live audience,” Gesiotto snipes in the piece, bearing the headline “Why Joe Biden is in trouble”.

“About the same time, we also learned that Donald Trump beat his opponent in fundraising by more than $25 million last month, dealing Biden one more atrocious blow,” Gesiotto adds.

To be fair to Gesiotto, that’s the type of campaign fluff one could expect from a campaign staffer. But what is it doing in the opinion section of a news outlet?

“Presidential debates demonstrate who has what it takes,” the piece is headlined, and is littered with a series of rote potshots aimed at Trump’s 2020 opponent Joe Biden. “Weakness could prove disastrous. Cognitive issues certainly will,” he adds.

Seemingly the piece offers nothing new or insightful. It’s based on the fantasy that Biden was seeking to avoid debating Trump, with Lewandowski suggesting Democrats want Biden to have the “luxury of hiding in his basement until Election Day” — a common refrain from Trump campaign email blasts.

The Hill’s opinion pages are not limited to Trump campaign staffers, to be clear, and they host plenty of Biden campaign officials and Democratic party operatives pushing the same kind of public relations content. Nor is The Hill alone in publishing the trite opinions of campaign workers. Trump 2020 soldier Katrina Pierson, for example, uses The Daily Caller as a dumping ground for her press releases.

The phenomenon also extends to the corporate and political lobbying class. In a scathing criticism published last year, the New Republic’s Libby Watson described The Hill opinion section as a “a dumping ground for whichever policymaker, think tank lanyard, or corporate CEO might want to publish some poorly-written—and self-serving—dreck about public policy that day.”

Describing The Hill as a platform for “boring garbage,” Watson notes that “these op-ed efforts are targeted at less than 500 people roaming the Beltway fiefdom.” So why are they publishing these press releases in what is supposed to be a serious a national news outlet? The answer is clear, if you put a good enough headline on it, unwitting readers will click thinking its legitimate news opinion or it may show up high in search results for less talked about individuals or companies. Clicks equal dollars even if they don’t equal anything resembling journalistic integrity.

This isn’t about which party is getting more free space to air their ads, or who is more egregious in their fluff, its about the fact that The Hill, and any other publication that wants to be taken seriously this election cycle, should not publish campaign ads in their news or opinion sections. Just adding a bio at the end identifying the writer as an interested party doesn’t cleanse the stink of publishing spin disguised as news.

This is an opinion piece. The views expressed in this article are those of just the author.