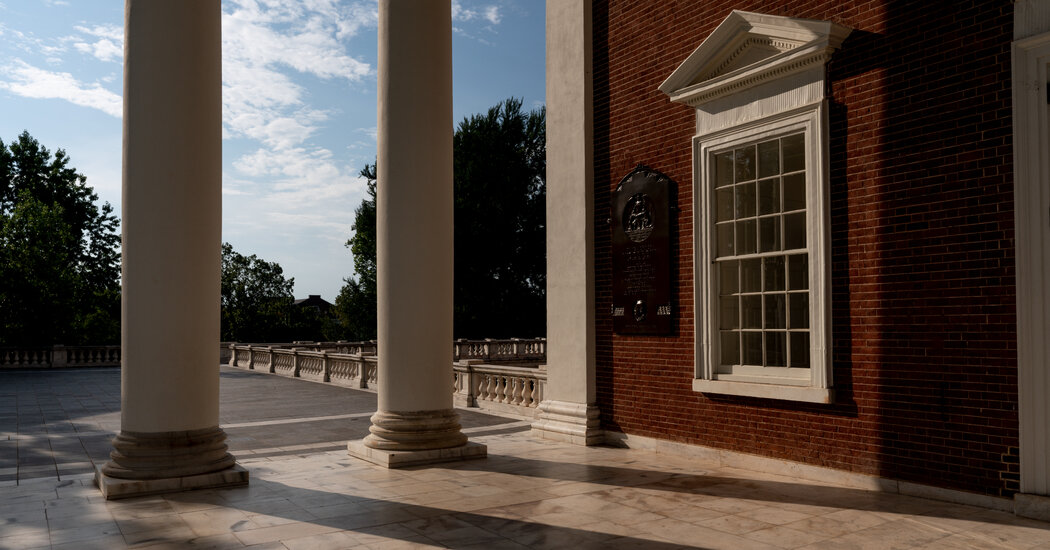 After Southern California’s soaring coronavirus caseload forced Chapman University this month to abruptly abandon plans to reopen its campus and shift to an autumn of all-remote instruction, the school promised that students would still get a “robust Chapman experience.”

“What about a robust refund?” retorted Christopher Moore, a spring graduate, on Facebook.

A parent chimed in. “We are paying a lot of money for tuition, and our students are not getting what we paid for,” wrote Shannon Carducci, whose youngest child, Ally, is a sophomore at Chapman, in Orange County, where the cost of attendance averages $65,000 a year. Back when they believed Ally would be attending classes in person, her parents leased her a $1,200-a-month apartment. Now, Ms. Carducci said, she plans to ask for a tuition discount.

A rebellion against the high cost of a bachelor’s degree, already brewing around the nation before the coronavirus, has gathered fresh momentum as campuses have strained to operate in the pandemic. Incensed at paying face-to-face prices for education that is increasingly online, students and their parents are demanding tuition rebates, increased financial aid, reduced fees and leaves of absences to compensate for what they feel will be a diminished college experience.

At Rutgers University, more than 30,000 people have signed a petition started in July calling for an elimination of fees and a 20 percent tuition cut. More than 40,000 have signed a plea for the University of North Carolina system to house students in the event of another Covid-19-related campus shutdown. The California State University system’s early decision to go online-only this fall has incited calls for price cuts at campuses from Fullerton to San Jose.

At Ithaca College — student population, 5,500 — the financial services team reports more than 2,000 queries in the past month about financial aid and tuition adjustments. Some 340 Harvard freshmen — roughly a fifth of the first-year class — deferred admission rather than possibly spending part of the year online, and a parents’ lobbying group, formed on Facebook last month, has asked the administration to reduce tuition and relax rules for leaves of absence.

Universities have been divided in their response, with some offering discounts but most resisting, arguing that remote learning and other virus measures are making their operations more, not less, costly at a time when higher education is already struggling.

“These are unprecedented times, and more and more families are needing more and more financial assistance to enroll in college,” said Terry W. Hartle, a senior vice president for the American Council on Education, a higher education trade group. “But colleges also need to survive.”

At Illinois State University, an 11th-hour shift infuriated Joseph Herff, a 22-year-old business major. He had locked into an off-campus lease and taken out $10,000 more in student loan debt by the time the school announced that its fall would be mostly online — the result of public health guidance and a shortage of coronavirus tests, according to the university’s president, Larry Dietz.

“I don’t have an issue with moving classes to online. I do have an issue though that classes are charged the same price,” Mr. Herff tweeted on an account that, until this month, he said in an interview, he had largely reserved for sports talk. “Why is this fair?”

Many colleges were facing financial dark clouds even before the coronavirus arrived. Population declines in some parts of the country have dampened enrollment, and soaring tuition has led many families to question the price of a college diploma. Moody’s Investors Service, which in March downgraded the higher education sector to negative from stable, wrote that even before the pandemic, roughly 30 percent of universities “were already running operating deficits.”

Since then, emptied dorms, canceled sports, shuttered bookstores and paused study-abroad programs have dried up key revenue streams just as student needs have exploded for everything from financial aid and food stamps to home office equipment and loaner laptops.

Public health requirements for masks, barriers, cleaning and other health protections also have added new costs, as have investments in training and technology to improve remote instruction and online courses.

“Starting up an online education program is incredibly expensive,” said Dominique Baker, an assistant professor of education policy at Southern Methodist University. “You have to have training, people with expertise, licensing for a lot of different kinds of software. All those pieces cost money, and then if you want the best quality, you have to have smaller classes.”

Chapman’s president, Daniele Struppa, said the university spent $20 million on technology and public health retrofits for the fall semester, and he estimates that the switch to an online fall will cost the school $110 million in revenue. He has cut spending “brutally” from the $400 million annual budget, he said, freezing hires, slashing expenses, canceling construction of a new gym, ending the retirement match to employees and giving up 20 percent of his own $720,000 base salary.

Only students who can demonstrate financial need will get help, he is telling families. “Tuition really reflects our cost of operation, and that cost has not only not diminished but has greatly increased.”

A survey by the American Council on Education estimated that reopening this fall would add 10 percent to a college’s regular operating expenses, costing the country’s 5,000 some colleges and universities a total of $70 billion.

“For institutions,” said Mr. Hartle, who lobbies for the council, “this is a perfect storm.”

Students are feeling tempest tossed, too.

Temple sociologist Sara Goldrick-Rab, founder of the university’s Hope Center for College, Community and Justice, said the organization has been “bombarded” with pleas for help from students who can’t cover their rent and don’t know how to apply for food stamps. At least a third of students had lost jobs because of the pandemic by May, according to the center.

Such situations, Ms. Goldrick-Rab said, are particularly risky because they often prompt students to take on second or third jobs or to become distracted, which in turn imperils financial aid that can be revoked if their grades fall.

Laurie Koehler, vice president for enrollment strategy at Ithaca College, said about one in six students reported in a just-completed survey that the pandemic had significantly hurt their ability to continue their studies. At Lafayette University in Easton, Pa., the school’s president, Alison Byerly, said she expects requests for additional financial aid to grow by up to 15 percent this year.

But the shift online also has accelerated fundamental questions about the future of higher education, said the director of the Edunomics Lab at Georgetown University, Marguerite Roza.

“This is a moment that is basically forcing students and parents to say, ‘What is the value? If I can’t set foot on campus, is that the same value?’”

Will Andersen, an 18-year-old incoming freshman at the University of Wisconsin-Madison, which will begin the semester remotely, put it this way: “Who wants to pay $25,000 a year for glorified Skype?”

“Being able to meet up with friends, have those highly intellectual conversations, walking over to CVS and getting ice cream at 1 in the morning,” she said, ticking off the parts of education her daughter, a rising junior, has missed while working at home on her computer. “And let’s not forget just not being home with your mama, with her eyes on you.”

Some families have sued. Roy Willey, a class-action attorney in South Carolina, said his firm alone has filed at least 30 lawsuits — including against the University of California system, Columbia University and the University of Colorado — charging universities with breach of contract for switching in-person instruction to online classes, and is closely monitoring the fall semester.

Most suits are in their early stages, though several universities have moved for dismissal. “If you and I go down to the steakhouse and order a prime rib, and prepay for it and sit at our table, and a while later the server comes by and says, ‘Here’s two hamburgers, we’re out of prime rib’ — well, we may eat the hamburgers, but they’re not entitled to the money we would have paid for prime rib,” Mr. Willey said.

A handful of universities have announced substantial price cuts. Franciscan University of Steubenville, a private Catholic university in Ohio with about 3,000 students, announced in April that it will cover 100 percent of tuition costs, after financial aid and scholarships, for incoming undergraduates. Williams College in Massachusetts took 15 percent off in June when it announced it would combine online and in-person instruction this fall.

More typical is the 10 percent cut at Catholic University in Washington, which plans to start the semester online and dramatically scale back the number of students allowed back onto campus. Johns Hopkins, Princeton, Georgetown University, Spelman University and other institutions are offering similar reductions. Lafayette College is limiting its 10 percent to students who study from home for the semester. The University of Southern California has offered a $4,000-per-semester “Living at Home Scholarship.”

Some schools are extending freebies. Pacific Lutheran University in Tacoma, Wash., has offered to tack on a tuition-free year of instruction for currently enrolled students, noting on its website that the current situation is not “the college experience they imagined.” St. Norbert College in De Pere, Wis., is offering a free semester.

But most colleges have kept prices flat, and a few have even increased them. They can’t afford to do otherwise without mass faculty layoffs, said Robert Kelchen, a Seton Hall University associate professor of higher education, even though the isolated, monitored experience campuses are selling this fall “is going to feel like some combination of a monastery and a minimum-security prison.”

“This crisis is demonstrating that there is real value in face-to-face instruction,” agreed David Feldman, an economist at William & Mary in Virginia and author, with Robert B. Archibald, of “The Road Ahead for America’s Colleges and Universities.” That recognition, he said, will generally protect better-endowed schools and those with state support.

Even so, he said, a culling is at hand for higher education. His prediction: a consolidation of public university branch campuses and a reckoning for some small, private liberal arts colleges that are already operating on thin margins.

“There will be a shakeout,” he said.

Steelers-Titans Game Being Postponed, Expected To Be Played Monday Or Tuesday – CBS Pittsburgh