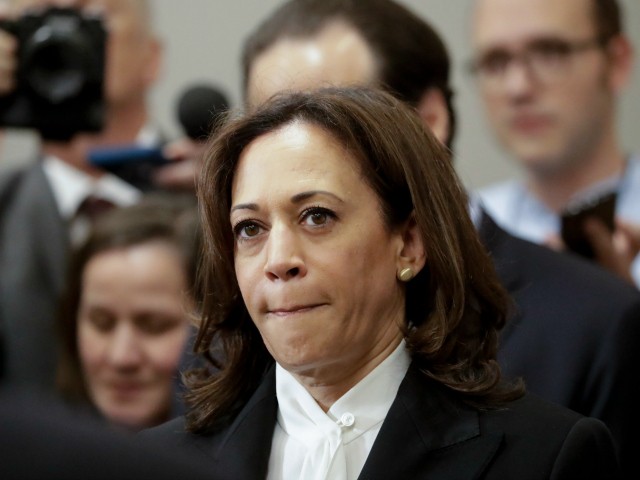 Sen. Kamala Harris (D-CA) expressed belief in the veracity of accusations of sexual assault against former Vice President Joe Biden until her presidential campaign failed, noted Carrie Severino, president of the Judicial Crisis Network and co-author of Justice on Trial: The Kavanaugh Confirmation and the Future of the Supreme Court, offering her remarks on Wednesday’s edition of SiriusXM’s Breitbart News Daily with host Alex Marlow.

Severino recalled Harris’s statements about Biden’s accusers after Justice Brett Kavanaugh’s confirmation to the Supreme Court while Harris was still officially campaigning for the presidency.

“Kamala Harris was the ring leader in the anti-Kavanaugh circus,” remarked Severino. Harris’s presidential campaign paid at least $134,500 for over 3,600 political ads on Facebook related to the Kavanaugh confirmation hearings.

Severino added, “Suddenly Joe Biden is accused to something very similar, and what’s so fascinating is [Harris’s] political about-face when [Biden] was first accused of inappropriate touching by Tara Reade, as well as like a dozen other women who talked about how he touched them inappropriately.”

Severino continued, “Kamala Harris said, ‘Oh, I believe them,’ and she thought that needed some more investigation. That was back when she was running against Joe Biden for president. Then, when Tara Reade came out with even more specific and devastating allegations of actual rape — effectively — that was when Kamala Harris was looking to be his vice president. She was one of the top contenders even back in April when Tara Reade came out with more information.”

Severino went on, “At that point, did [Harris] say, ‘I believe her?’ Did she say, ‘We don’t have enough, yet, but we need to at least investigate this?’ Oh no. She said, ‘She has the right to tell her story, but I believe Joe Biden, jumping to the opposite conclusion.”

Severino concluded, “[Harris] really was one of the first of a whole train of Democratic women who absolutely abandoned some of those positions, [and] who were willing to basically say, ‘I’ll believe anyone who’s politically is convenient for me, whether that’s [Christine] Blasey-Ford on one side or whether that’s Joe Biden on the other.”

UK Economic Contraction During Lockdown is Largest Ever