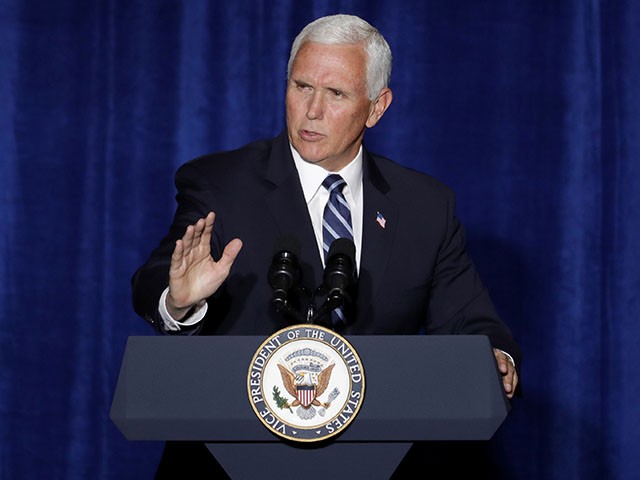 Vice President Mike Pence rallied with a group of law enforcement supporters in Arizona on Tuesday, warning them about the policies that former Vice President Joe Biden would pursue if elected president.

“The truth is you won’t be safe in Joe Biden’s America,” he said at the Cops for Trump rally in Tucson.

Pence reminded the audience that Biden had accepted the leftist premise that America was still “systemically racist” and that law enforcement officers had “an implicit bias against minorities.”

“The American people know we don’t have to choose between supporting law enforcement and supporting our African American neighbors,” he said. “We can do both. We have done both, and we’re going to keep doing both for four more years.”

Pence pointed to rising crime in major cities led by Democrats who were cutting the budgets of police departments, citing New York City Mayor Bill de Blasio and the city councils of Seattle and Minneapolis as examples.

“History teaches that weakness arouses evil,” he warned. “And, as we see major city stepping away from support for law enforcement, buying into the agenda of the radical left, we’re also seeing crime rise in those very same cities across the nation.”

Trump and Pence were endorsed by the Arizona Police Association, as the organization’s president, Justin Harris, spoke to the crowd.

“The inmates are running the asylum,” Harris said, adding that “these liberal socialist elected officials have essentially told their constituents that law and order important is no longer a priority.”

During the event, a protester shouted “Black Lives Matter” and “Fuck Trump.”