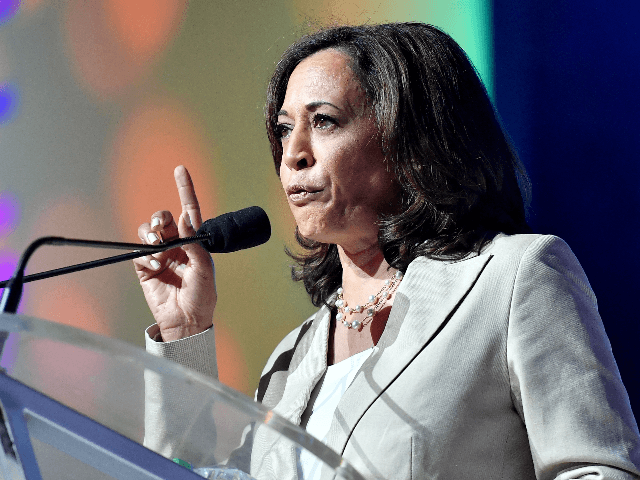 Sen. Kamala Harris (D-CA) once likened Immigration and Customs Enforcement (ICE) to the Ku Klux Klan, contending that a “perception” existed that the organization utilized the same tactics as the racist group.

Controversial aspects of Harris’s record are emerging to the forefront following Joe Biden (D) announcing her as his running mate. A debate has emerged among Democrats regarding Harris’s ideology. Many “Bernie Bros” do not believe she is progressive enough and point to the praise she has garnered by the establishment left. However, a look at Harris’s past statements shows that she, too, shares the radical views as the country’s far-left progressives, including the calls to “critically re-examine ICE.”

While progressive critics say that she stopped short of calling for “abolishing ICE,” she made her view of the agency abundantly clear during a November 2018 hearing with former ICE chief Ronald Vitiello:

Harris questioned Vitiello for once describing the Democrat Party as the “liberalcratic party or the NeoKlanist party,” for which he apologized.

The California senator used the opportunity to liken ICE to the racist group.

“The Klan was what we could call today a domestic terrorist group,” Vitiello said.

“Because they tried to use fear and force to change the political environment,” Vitiello explained, prompting Harris to ask, “And what was the motivation for the use of fear and force?”

“Based on race and ethnicity, ” Vitiello said, as Harris attempted to draw a parallel between ICE and the KKK, contending that she was talking about a “perception.”

“Right,” Harris said. “And are you aware of the perception of many about how the power and discretion at ICE is being used to enforce the law and do you see any parallels?”

Vitiello told the lawmaker that he did not see any, which did not sit well with Harris.

“How can you be the head of an agency and be unaware of how your agency is perceived by certain communities?” Harris asked.

Vitiello ultimately told Harris that many perceptions of the agency —  in both the media and public eye  — are “incorrect.” He later referred to her attempt to maim the agency as “unprofessional, unfair,” and a “disgrace” in a statement to the Washington Times.

“I thought it was totally unprofessional, unfair,” he said. “She can say whatever she wants about me personally, but she was trying to tar the whole agency. I think it was a disgrace.”

While Harris has stopped short of calling for the total abolishment of ICE, she has floated “starting from scratch.”

Pelosi Dodges on Whether She Will Consider Impeaching AG Barr to...

I Think We’re Going to Have Barrett Confirmation ‘Done Easily Before...