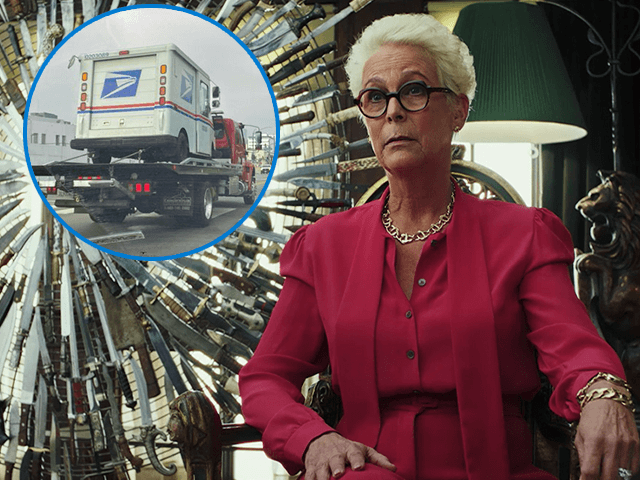 Actress Jamie Lee Curtis floated a conspiracy to her half million Twitter followers that President Donald Trump could be trying to “steal the election” after she said she saw a red hat-wearing truck driver towing a U.S. Postal service van.

According to the Halloween and Knives Out star, the man she saw had a “red cap on with white letters,” a design similar to President Trump’s “Make America Great Again” hats worn during his 2016 presidential campaign. “I swear, in broad daylight, the driver of the red truck had a red cap on with white letters. Conspiracy?” Jamie Lee Curtis wrote on Twitter, accompanied by a photo of a red tow truck transporting a U.S. Postal Service van. “Outright attempt at stealing the election by denying the access of the [U.S. Postal Service]? Let’s not let it happen!”

Curtis’ even tagged Democratic presidential nominee Joe Biden in the post. The post has yet to be “fact-checked” by Twitter, which has repeatedly flagged posts from conservative users the platform claims are spreading false information, including the president.

I swear, in broad daylight, the driver of the red truck had a red cap on with white letters. Conspiracy? Outright attempt at stealing the election by denying the access of the @USPS ? Let’s not let it happen! @JoeBiden pic.twitter.com/gG765Caldm

The president is a fervent critic of mail-in voting and has warned that it could be weaponized by a Democratic Party willing to cause chaos in the election. In an interview with Fox News host Sean Hannity on Tuesday, Trump warned that widespread mail-in voting could lead to “catastrophic corruption.”

“It’s rigged, and everyone knows it because you can’t send out 60 million mail-in ballots to everybody in the — who knows who’s getting them?” the president explained. “The mailmen are going to get them. And people are going to just grab batches of them. And you talk about China and Russia. They will be grabbing plenty of them. It’s a — it’s a disaster. It’s a rigged election waiting to happen.”

“He may have died a coward @realDonaldTrump but ALL living things suffer when they are blown up,” she wrote at the time. “Anyone who has experienced warfare, unlike yourself, would know that.” Curtis has since deleted the tweet.

Pelosi Dodges on Whether She Will Consider Impeaching AG Barr to...

I Think We’re Going to Have Barrett Confirmation ‘Done Easily Before...