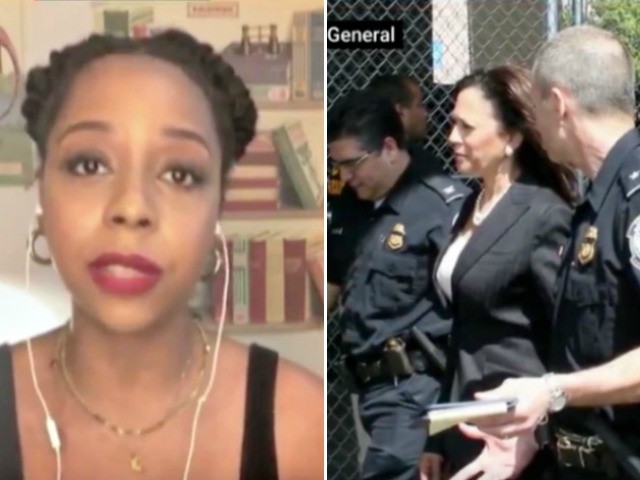 There is a “great deal of frustration” over the Biden-Harris ticket, Briahna Joy Gray, former national press secretary for Sen. Bernie Sanders (I-VT), said during a Democracy Now! interview on Wednesday.

While Gray acknowledged Biden’s selection as “historic,” she pointed to the current political and cultural environment, suggesting that neither Biden nor Harris meet the moment:

In the midst of the largest protest movement in U.S. history against racist policing, @curaffairs‘s @briebriejoy says “there’s a great deal of frustration” around Joe Biden’s vice presidential pick, Kamala Harris, who is “known for being the top cop from California.” pic.twitter.com/ka9D5It1oo

“Something else historic is going on right now which is that we are in the middle of the largest protest movement in American history,” she said, stating that people are seeking “non-punitive, non-incarceral solutions to the kinds of economic problems” that are plaguing “black and brown communities” and Americans as a whole.

She added there is a  “great deal of frustration” due to the Democrats’ choice “not only to nominate a candidate who is known as the author of what is actually called the Joe Biden Crime Bill, but he’s gone and also selected a running mate who is known for being the top cop from California — the state that has the second-highest number of incarcerated people in America.”

Gray said Harris has not done enough to relieve concerns over her previous stances, nor has she demonstrated the” level of growth” progressives desire.

She also questioned the electoral benefit of Harris’s addition to the ticket, contending that Biden already had the base of black voters in swing states “locked down.”

So it’s not clear to me hat the electoral value of this is when you contrast that especially with the fact that younger voters in particular and swing voter care less enthusiastic about this campaign in part because they were looking for a kind of fundamental change in this campaign cycle — desire that was only exacerbated by the health crisis and economic crisis that we’re in now.

“Joe Biden has articulated very clearly that he is the candidate who promises that nothing will fundamentally change,” she added.

Gray slammed Biden’s choice following his Tuesday announcement, suggesting it was emblematic of “contempt” for the base:

We are in the midst of the largest protest movement in American history, the subject of which is excessive policing, and the Democratic Party chose a “top cop” and the author of the Joe Biden crime bill to save us from Trump.

The contempt for the base is, wow.

Sanders, however, has demonstrated nothing but support for the Biden-Harris ticket, extending a hearty congratulations to the California senator.

“Congratulations to @KamalaHarris, who will make history as our next Vice President,” he said.

“She understands what it takes to stand up for working people, fight for health care for all, and take down the most corrupt administration in history,” he added. “Let’s get to work and win”:

Congratulations to @KamalaHarris, who will make history as our next Vice President. She understands what it takes to stand up for working people, fight for health care for all, and take down the most corrupt administration in history. Let’s get to work and win.