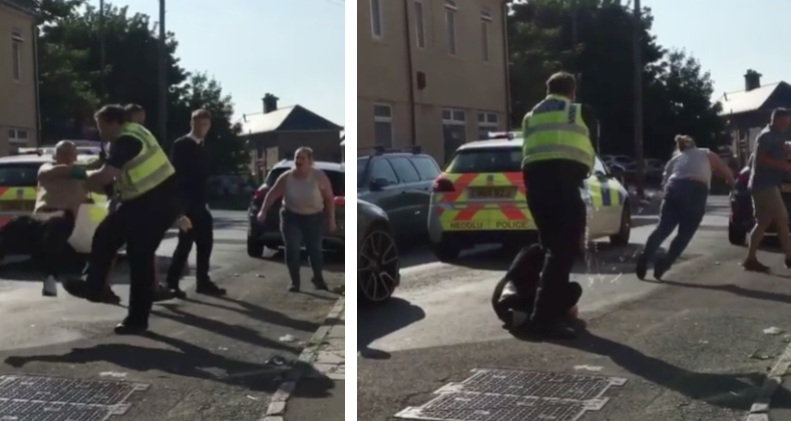 A Welsh policeman in the town of Barry went “Cobra Kai” on a man who would not cease from his aggressive behavior.

The officer, who was filmed by Calum Owen on Saturday, was forced to sweep a man’s leg and bring him to the ground after the aforementioned man repeatedly ignored orders to get back.

The shirtless man was taken to the ground, only to be reinforced by a crazed woman hellbent on freeing him.

She too, felt the sting of Cobra Kai, but in the form of electric current produced by a Taser.

Sergeant Richard Lloyd, at Barry Police Station, told the Daily Star that violence against officers is not to be tolerated.

“Our officers work tirelessly to protect the communities they serve and they do not deserve to be assaulted during the course of that duty,” he said. “South Wales Police will deal robustly with any report of officers and staff being assaulted. Fortunately on this occasion, the officer did not sustain serious injuries and is receiving support from his colleagues.”

The man and woman, both 35 years of age, were arrested for various offenses.