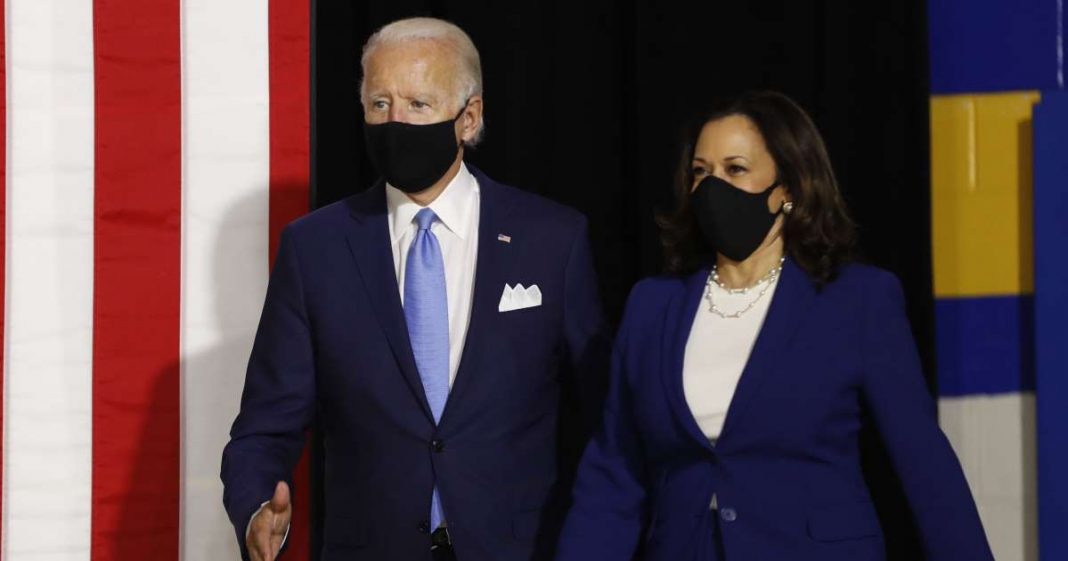 
© Bloomberg
Joe Biden and Kamala Harris arrive to a campaign event in Wilmington, Delaware on Aug. 12.

He noted his history-making choice. Harris is the first Black woman and first Indian-American to be on a major party presidential ticket.

“This morning all across this nation little girls woke up — especially little Black and brown girls who so often may feel overlooked and undervalued in our society — but today, maybe they’re seeing themselves for the first time in a new way,” he said.

The joint event was voters’ first opportunity to see the chemistry between Biden with Harris since he announced his vice presidential pick Tuesday. Held in a small gym at Alexis I. duPont High School in Biden’s hometown of Wilmington, Delaware, it was scaled down from past, raucous introductions of a vice presidential nominee because of the coronavirus pandemic.

Biden welcomed Harris to the ticket, saying he had “no doubt” that he had made the right choice.

She thanked the former vice president for the opportunity to run with him.

“I am incredibly honored by this responsibility and I am ready to get to work,” Harris said. “America is crying out for leadership, yet we have a president who cares more about himself than the people that elected him. We don’t have to accept the failed government of Donald Trump and Mike Pence. In just 83 days we have the chance to choose a better future for our country.”

The event could end up being one of the few joint appearances for the running mates, as pandemic restrictions have limited Biden’s in-person events in the campaign to unseat Trump.

Biden looked to his own relationship with Barack Obama as he considered his vice presidential choice. He committed to choosing a woman early on in the process and said he hoped to choose a running mate with whom he’d be compatible and shared values, even if she came from a very different background than his.

Though the event was their first as a ticket, Biden and Harris have a history of nearly a decade. Harris worked with Biden’s late son Beau when he was attorney general of Delaware and she held the same job in California. They shared friendly moments — and some tense ones — including Harris’s attack on Biden’s opposition to busing to desegregate schools in the 1970s — when both were campaigning for the Democratic nomination last year.

(Updates with Harris quotes in 7th and 8th paragraphs)