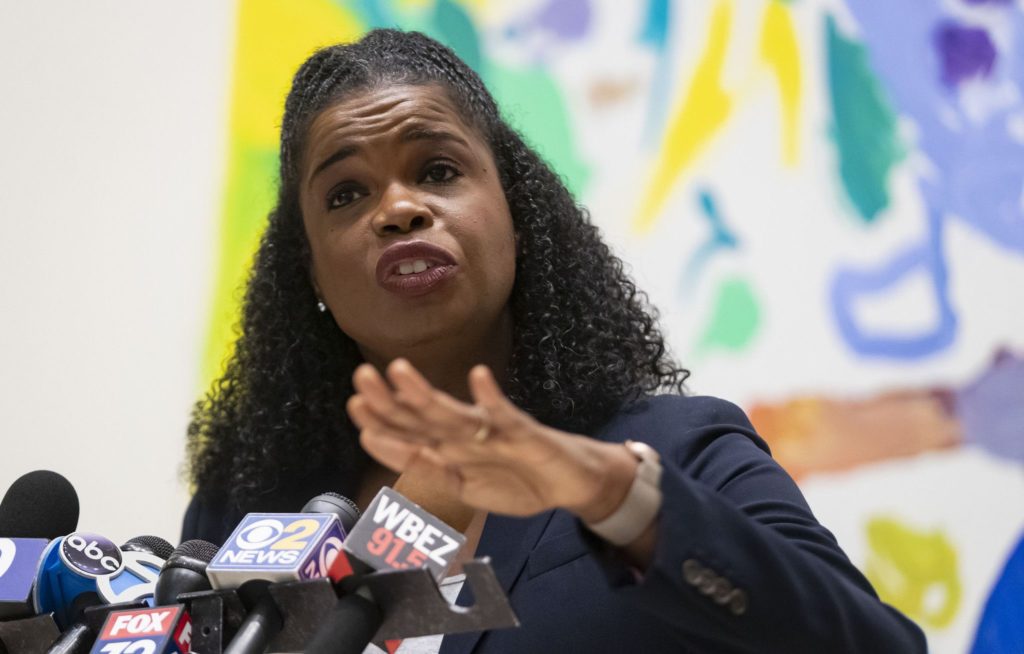 Without naming State’s Attorney Kim Foxx, Lightfoot called on prosecutors not to let suspects cycle through the system without consequences. And Brown went so far as to imply that looters reoffended this weekend after getting away with the same crimes during the widespread unrest earlier this year, eliminating any deterrent.

“(Suspects) get released, many charges get dropped, and so they feel emboldened to do it more,” he said. “Once prosecution and sentencing comes up, there’s no consequences.”

But Foxx, who is no stranger to accusations that she is soft on crime, flatly rejected that narrative at a news conference Monday. Her office has not dropped any looting cases related to recent unrest, she said, calling for a response “beyond a sound bite and a finger point.”

From late May to mid-June, about 325 people were arrested on felony charges “related to the demonstrations and civil unrest that followed the murder of George Floyd,” her office said in a statement Monday. Floyd’s death in Minneapolis after a police officer knelt on his neck for nearly nine minutes sparked protests and fallout around the country, including Chicago.

Of those Cook County felony arrests, 90% were approved for charges by Foxx’s office, she said. Three-quarters of the approved felony cases were for looting-related charges — and none of those has been dropped, Foxx said. The office did not immediately release a detailed list of those cases.

Experts and academics have long said Chicago’s crime problem has roots in the city’s ingrained poverty and racial segregation, among other failings. Foxx on Monday repeatedly called 2020 “unprecedented,” and noted the widespread gun violence, ongoing economic crisis and the COVID-19 pandemic, as well as protests focusing on police brutality that have occurred at the same time as separate acts of property destruction.

“It does not serve us to have dishonest blame games when all of our hearts are breaking by what we are seeing,” she said.

Brown later declined to clarify his remarks. A police spokeswoman did not specifically elaborate either, beyond repeating Brown’s earlier statement that individuals are emboldened “when there are simply no consequences or accountability for criminal activity.”

Lightfoot also declined to comment further on the point, with her office referring questions to the Police Department.

The unrest that began early Monday was evidently sparked after a Sunday afternoon shooting in the Englewood neighborhood.

Police there shot and wounded a 20-year-old man who allegedly opened fire on them while trying to evade arrest, authorities said. That man was charged with attempted murder late Monday.

Someone began to spread false information about the shooting, including that police had shot a child, according to Brown. After a heated scuffle between police and neighbors in the afternoon, groups began to plan downtown looting on social media, authorities said. More than 100 people ultimately were arrested in the chaos that followed.

About 500 people arrested on misdemeanors during unrest earlier this summer would fall within that category, she said Monday: protesters accused of offenses such as violating curfew or disorderly conduct for declining to disperse in a timely manner.

“Looters have been charged and are awaiting trial. Peaceful protesters have not had their cases pursued,” she said.

A spokeswoman for the office could not provide an estimate of how many such misdemeanor cases have been dropped under the policy, since the office does not generally keep track of misdemeanor data, and people are just now beginning to go to their court dates as the system emerges from a COVID-related shutdown.

Critics said looters were additionally emboldened by a Foxx policy that raised the bar for prosecuting shoplifting as a felony — a theory Foxx also rejected Monday.

Retail theft charges are intended for people who walk out of an open store without paying for merchandise, not those who break into a store or loot, she said.

Foxx’s challenger in the November election, former Judge Pat O’Brien, said that retail theft may as well just be looting by another name, and that Foxx “has in fact made this town a free-for-all for people that want to steal.”

O’Brien also placed blame on Foxx for suspects getting more lenient bonds, even though judges are responsible for setting bail. Prosecutors can effectively sway judges to set bail in higher amounts, he said.

Brown and other critics, including downtown Ald. Brendan Reilly, 42nd, have recently placed the blame for violence on a “revolving-door” court system that sees more suspects released on low bail.

Foxx, Chief Judge Timothy Evans and other high-ranking county officials have supported reforms aimed at ensuring people get affordable bonds and do not stay locked up pending trial simply because they cannot pay to get out.

“Bond court is now known as i-bond court, because people are just getting released on personal recognizance, whatever the charge,” Reilly said.

In a statement Monday, Evans emphasized that defendants are innocent until proven guilty, and indicated that bonds should not be imposed as a form of punishment for a crime.

“The administration of justice requires that each case be adjudicated impartially and independently,” he said.

Foxx’s remarks to reporters came the day of a Tribune story finding that her office dropped all charges against felony defendants —including those accused of violent crimes like murder and sexual assault — more often than her predecessor, Anita Alvarez.

During her first three years as state’s attorney, her office dropped all charges against 29.9% of felony defendants. In the last three years of Alvarez’s tenure, the rate was 19.4%. In all, a total of 25,183 people had their felony cases dismissed under Foxx through November 2019, up from 18,694 for a similar period under Alvarez.

For the three-year period analyzed, Foxx’s office dropped 8.1% of homicide cases, compared with 5.3% under Alvarez, the Tribune found.

And under Foxx, the percentage of cases dropped for defendants accused of aggravated battery of a police officer more than doubled, from 3.9% to 8.1%.

Foxx’s office did not dispute the figures, but she told the Tribune they give an incomplete picture of her approach to public safety. She said she has tried to allow her prosecutors to openly drop felony charges if a case has legal problems, and she pointed to the office’s many past wrongful convictions and the history of Chicago police detectives torturing people of color to get false confessions.

On Monday, Foxx noted that violent crime declined during the three-year period the story analyzed, and she disputed any implication that her office’s policies led to this year’s spike in violence.