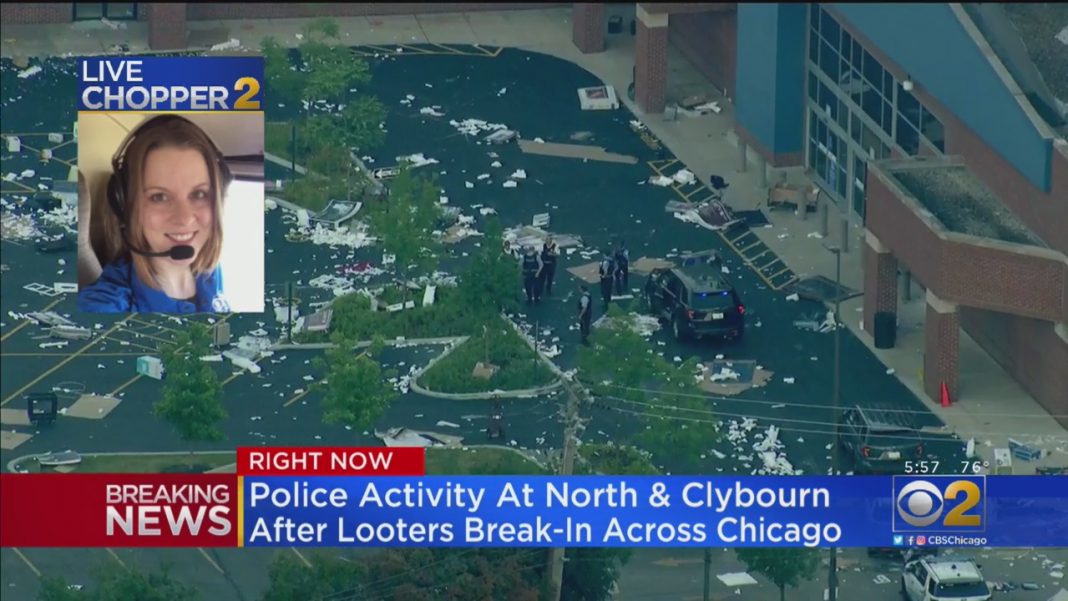 CHICAGO (CBS)– Dozens of stores, banks and other businesses were broken into across downtown Chicago overnight.

The unrest started around 11 p.m. Sunday and cause of the unrest is still unknown at this time, but it does appear to be a coordinated effort. Video shows multiple cars parked on the streets as people ran out and broke into stores. CBS 2’s Ryan Baker reports that former Bears player Patrick Mannelly witnessed the looting from his high-rise condo and saw cars driving up to a U-Haul truck and putting stolen goods into the trailer.

“This was no accident; this wasn’t random,” Baker reported.

On Sunday on the South Side, chaos erupted in Englewood after police shot a suspect.  Officers shot and wounded a suspect who was firing at them in Englewood Sunday afternoon, police said. Video showed crowds gathering about an hour later that led to tense moments with police. However, it doesn’t appear at the moment that the incident was related to the criminal activity in the Loop.

Bridges surrounding The Loop are closed to traffic. Expressway ramps leading into the downtown area are also shut down.

CBS 2 is providing updates on the evolving story.

Tom, the owner of Wabash Jewelers, said the looting was coordinated. “There was no anger.  They politely told me that were going inside,” he said.

Tom said the looters drove up in cars, carrying bricks to break the glass.  As they left, they ran to nearby U-Hauls to put the stolen loot inside.

After police left, another group showed up and broke into the store again.

“We have lost control of our streets, and I don’t know how we will get them back,” said Ald. Brian Hopkins, whose ward includes the downtown area.  He was talking live with CBS 2 when Mayor Lori Lightfoot called him, and he hung up to take that call.

The glass doors into Macy’s were ripped “like sheets of paper” and looters took whatever they could hold, from purses to candy, Chris Tye reports.

Looters ripped through the Best Buy at North and Clybourn.

The Best Buy at North and Clybourn was destroyed by looters. Boxes and debris from stolen merchandise were strewn across the parking lot. “Everything is complete chaos,” reports CBS 2’s Jeanette Hudson. The damage looked more like a tornado had hit the area. The nearby Apple store was wiped clean of laptops and other devices on display.  Police were seen arresting three men who were inside. Chris Tye reports that police are responding to reports that some looters may still be inside Block 37.  “This is a Monday morning in Chicago. This is surreal,” said Tye, adding that the area was still recovering from looting and unrest in June after the death of George Floyd in Minneapolis.. Inside the mall, boxes and clothing were strewn all over the floor. Glass doors were broken everywhere.

As the sun began to rise, it appears most of the looters have left downtown.  The CTA is not running trains and buses in the Loop.  All expressway ramps leading into the city have been closed.

There are reports of a police involved shooting at Lake and Michigan.  Vi Nguyen reports that no officers were injured.

The retail stores at Block 37 have been broken into and looted. Glass was broken and people were seen running on esclators carrying stolen merchanside. Several boxes and bags were seen on Washington Street. Block 37 is connected to the CBS 2 Broadcast Center.

Breaking #Looting in #Chicago. This at Block37 just outside of @cbschicago pic.twitter.com/H3fVpSqRTn

Vince Gerasole reports that police have shut down several streets in the Loop.

This is Macy’s on State Street. Looters going through the entrance on Washington Street. @cbschicago pic.twitter.com/AkhpjQoo40

Nguyen is live in The Loop and said she saw a person dragging an ATM down the street. She said she has seen many arrests, however police are outnumbered by looters.

The cause of the unrest is still unknown at this time, but it does appear to be an organized event.

Mass chaos in downtown Chicago. Hundred of people looting stores. Looters broke into a bank and ripped out the atm. They are trying to break into it. This is at State and Lake. @cbschicago pic.twitter.com/oKGrMHGADP

This is a developing story.

Don’t Be ‘Intimidated’ by People Who Look Like ICE Agents, Law Enforcement at the Polls

Cats spread Covid to other pets and must stay indoors with self-isolating owners, scientists warn

Don’t Be ‘Intimidated’ by People Who Look Like ICE Agents, Law...

Cats spread Covid to other pets and must stay indoors with...