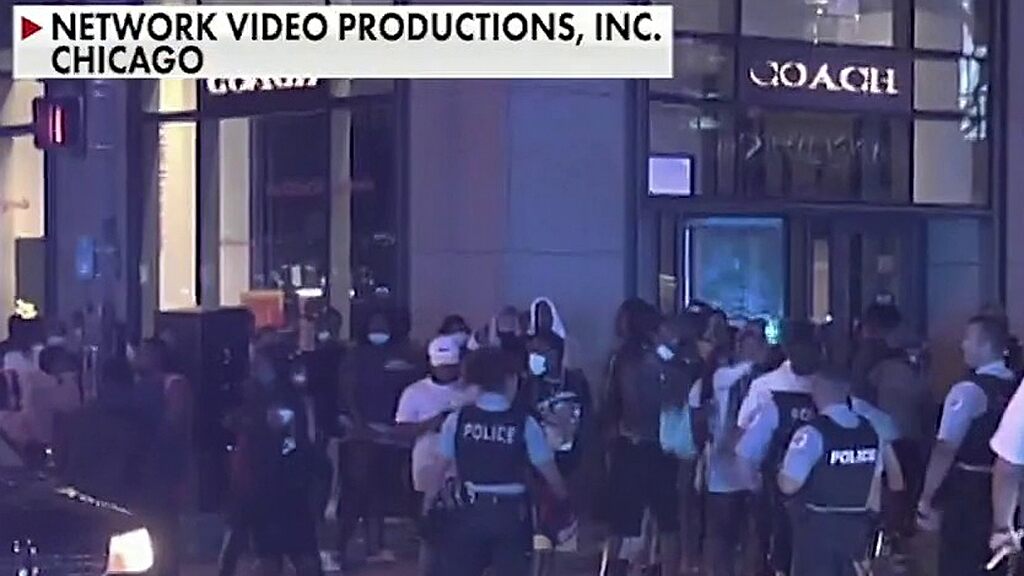 A police-involved shooting in Chicago’s neighborhood of Englewood is believed to have sparked a night of looting and chaos in the downtown Magnificent Mile.

Chicago Police received reports of a person with a gun around 2:30 p.m. Sunday in the area of South Racine Avenue and West 57 Street and arrived to find a man who matched the description provided by the caller, police said in a press release.

But when they tried to confront the man, he ran off – allegedly taking out a gun and firing at the officers as he did so, authorities said.

“During the foot pursuit, the offender turned and fired shots at the officers,” said Deputy Chief Yolanda Talley during a Sunday press conference, according to local affiliate FOX 32 Chicago.

Police fired back and struck the man. He was taken to a local hospital, but his condition was not known.

Confusion amongst bystanders and area residents fueled tensions between police and a crowd of dozens after the shooting, when people were reportedly under the impression police had shot a child.

CHILDREN ARE PAYING THE PRICE AS GUN VIOLENCE SURGES NATIONWIDE

Police are expected to provide additional details on the shooting during a press conference Monday morning.

“Emotions were running high. They were responding to misinformation,” Talley said, according to the Chicago Sun-Times.

Hours later, shortly after midnight in Chicago’s downtown area, hundreds of people smashed windows, stole from stores and clashed with police. The widespread looting was captured in several videos shared to social media.

Don’t Be ‘Intimidated’ by People Who Look Like ICE Agents, Law Enforcement at the Polls

Cats spread Covid to other pets and must stay indoors with self-isolating owners, scientists warn

Don’t Be ‘Intimidated’ by People Who Look Like ICE Agents, Law...

Cats spread Covid to other pets and must stay indoors with...