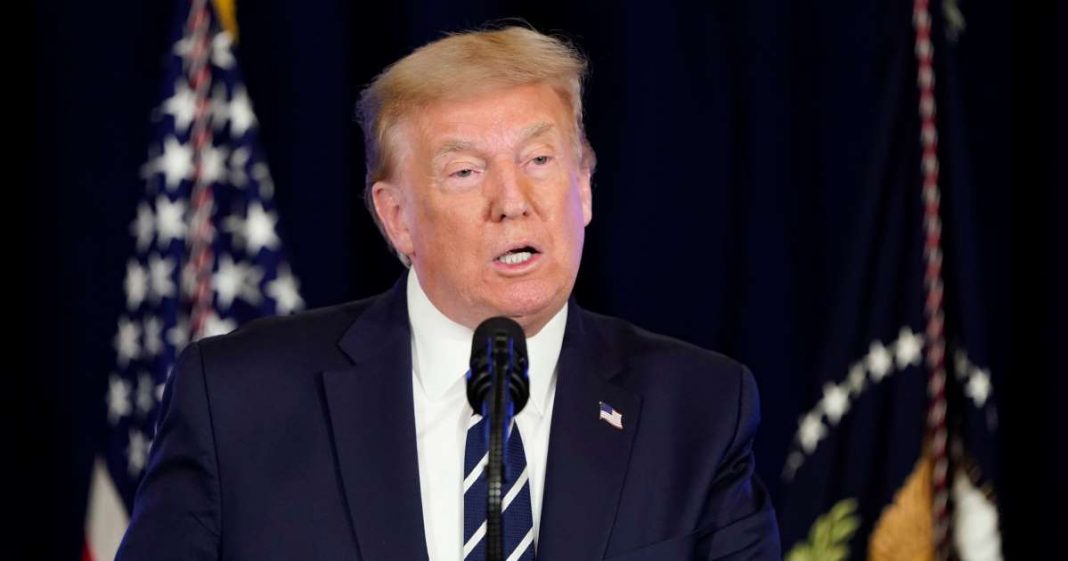 President Trump pledged on Saturday to pursue a permanent cut to the payroll taxes that fund Social Security and Medicare if he wins reelection in November, a hard-to-accomplish political gambit that some experts see as a major headache for the future of the country’s entitlement programs.

Trump unexpectedly promised the policy action as he signed a directive that aims to help cash-starved Americans amid the coronavirus pandemic. The order allows workers to postpone their payroll tax payments into next year but doesn’t absolve their bills outright — though the president said he would seek to waive what people owe if he prevails on Election Day.

“If I’m victorious on November 3rd, I plan to forgive these taxes and make permanent cuts to the payroll tax,” Trump said at a news conference in Bedminster, N.J. “I’m going to make them all permanent.”

“In other words, I’ll extended beyond the end of the year and terminate the tax,” Trump later added. “And so we’ll see what happens.”

Major changes to the tax code fall entirely to Congress, so Trump alone cannot waive Americans’ tax debts or enact permanent changes to tax law. Democrats and Republicans alike already had balked at Trump’s push for a payroll tax holiday in negotiations over the next round of coronavirus aid, suggesting a more lasting tax cut may be even tougher to secure if Trump does indeed win reelection.

In doing so, though, Trump would be embarking on a fraught process that could have catastrophic fiscal effects on programs including Social Security, which watchdogs recently have warned is in dire financial straights, expected next year to have costs that exceed its total incomes.

“By having a permanent cut, that immediately makes you ask the question on what’s going to happen on the benefits side,” Garrett Watson, a senior policy analyst at the Tax Foundation, said. “That would make it worse if you didn’t have a source of revenue to backfill [the cut].”

Shortly after Trump issued his directive, AARP raised a series of potential problems created by the president’s order, including for employers who have to track the deferred taxes and new economic anxieties for the nation’s retirees.

“Social Security is more crucial than ever as Americans face the one-two punch of the coronavirus’s health and economic consequences,” Nancy LeMond, the group’s executive vice president, said in a statement. “But, this approach exacerbates people’s already-heightened fears and concerns about their financial and retirement security.”

For now, the exact workings of Trump’s order remain unclear. Typically, employers automatically deduct payroll taxes from their employees’ paychecks and send that money directly to the federal government. Under Trump’s order, however, those payments are postponed between September 1 and the end of the year. Trump said Saturday it would result in “bigger paychecks for working families,” while taunting Democrats, including former vice president Joe Biden.

Biden responded in a statement that Trump threatens to “undermine the entire financial footing of Social Security,” adding: “He is laying out his road map to cutting Social Security.”

Some economists, meanwhile, questioned the wisdom of Trump’s payroll tax policy. Along with the uncertainty over how it’d actually be implemented, the directive doesn’t help some of the people facing the greatest hardship as a result of the coronavirus, said Chye-Ching Huang, the senior director of economic policy at the left-leaning Center on Budget and Policy Priorities.

“Even if people were to see a bigger paycheck in a number of weeks, the underlying policy is really poor policy,” she said. “The people who would be seeing the biggest increase in their paychecks still have jobs, still have earnings … People who lost jobs or retired or get income from other sources would see no help from this.”