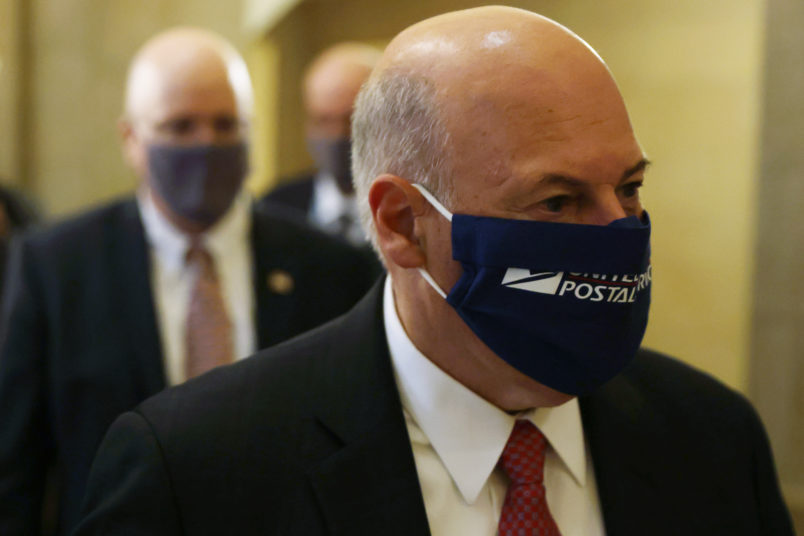 Democrats have accused Postmaster General Louis DeJoy, a Trump ally, of “sabotage” and playing “partisan games” by changing operations and cutting top personnel from the nation’s mail service as voters prepare to cast mail-in ballots in upcoming elections amid the coronavirus pandemic.

“The drastic changes to the Postal Service by an overtly partisan Postmaster General are another example of the President’s attempts to prevent millions of Americans from having their votes counted,”Committee on Oversight and Reform Chair Carolyn Maloney (D-NY) said in a statement Saturday noting expectations of “a historic number of Americans to vote by mail.”

DeJoy said in a memo obtained by The Washington Post Friday that a sweeping reorganization plan would displace the two top executives overseeing day-to-day operations.

Maloney was among a group of nine Congress members to sign a letter on Friday that requested Postal Service Inspector General Tammy L. Whitcomb to investigate how DeJoy went about crafting policy that bars postal workers from taking overtime or making additional trips to deliver mail on time.

Government Operations Subcommittee Chair Gerry Connolly (D-VA) who offered his signature, called postal service changes in a tweet Friday “a crooked ordeal,” later adding that it was “deliberate sabotage to disrupt mail service on the eve of the election — an election that hinges on mail-in ballots.”

Senator Elizabeth Warren (D-MA) also signed the letter, tweeting Saturday that it was DeJoy’s job to “get the mail delivered on time, not play partisan games.”

“How many ways can the new Postmaster General sabotage the @USPS?” Warren added.

The Massachusetts Senator cited a finding, originally reported by the Capitol Forum, that the U.S. Postal Service has told states that they’ll need to pay first-class 55-cent postage to mail ballots to voters, a significant hike from the 20-cent bulk rate.

This is the clearest example yet of Trump and his puppet Postmaster General’s attempts to sabotage the USPS before November’s election.

This kind of behavior is why we’re demanding an investigation into Trump’s USPS—the Inspector General should add this to their list. https://t.co/2aXcLeZsF9

The reorganization at the U.S. Postal Service, has intensified tensions between postal officials and many Democratic lawmakers, who have pushed to expand mail-in-voting as a safe option for voters to avoid crowding polling stations amid the ongoing coronavirus pandemic.

Both Republican and Democratic lawmakers have called on DeJoy to reverse operational changes that appear to have slowed election mail delivery in some areas.

“It could not be more clear they are trying to take down the United States Postal Service from the inside — at a time when we need it the most,” Senator Kamala Harris, tweeted Saturday afternoon.

It could not be more clear they are trying to take down the United States Postal Service from the inside—at a time when we need it the most.

Congress must immediately step up to save the Postal Service and safeguard our elections. There’s no time to waste. https://t.co/S3sodtYEpX

Per the Post, 33 staffers included in the former postal organization chart either kept their jobs or were reassigned, with five others joining the leadership from other roles.

Top Democrats raised eyebrows when DeJoy, who fundraised for President Trump was brought onto the role in June —DeJoy had donated more than $2 million to the Trump campaign and Republican causes since 2016.

The highly partisan pick also raised question as to whether the selection of DeJoy was part of Trump’s months-long efforts to chip away at mail-in-voting in Democrat-led states.

At a public meeting of the U.S. Postal Service’s Board of Governors on Friday, DeJoy addressed attacks from Congress over the reported delays in mail delivery.

“We will do everything we can to deliver election mail in a timely manner consistent with our operational standards,” he said, adding that the postal service was not slowing down election mail.

DeJoy pressed lawmakers to take legislative action that would help pad the USPS’ financial losses rather “than sensationalizing isolated operational incidents” which he acknowledged can occur from time to time.