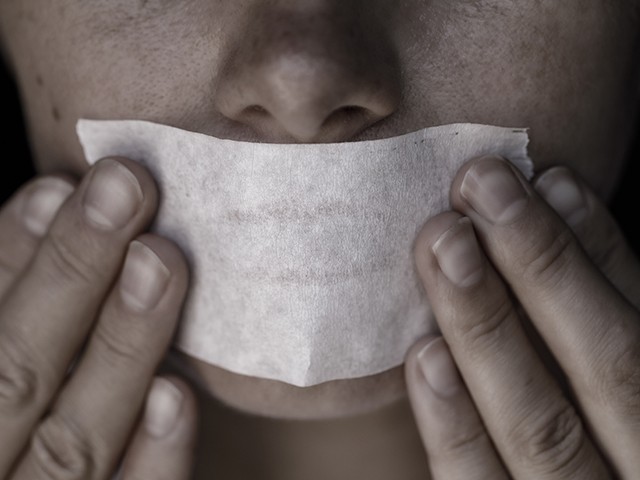 Author and First Things Editor R.R. Reno stepped away from his office and did some old fashioned reporting.  He visited several Midwestern states that were key in the 2016 election.  He wanted to get a better feel of the country’s mood away from the East Coast and mainstream media.

One of the men he interviewed shared: “Right now journalists seem ignorant of what most people are thinking, perhaps willfully so … In all fairness, most people won’t say what they’re thinking. It’s too dangerous.”

A new Cato Institute Survey confirms this fear. “Nearly two-thirds—62%—of Americans say the political climate these days prevents them from saying things they believe because others might find them offensive,” the study found. “Majorities of Democrats (52%), independents (59%) and Republicans (77%) all agree they have political opinions they are afraid to share.”

Only “strong liberals” in the Cato study feel free to speak their minds in public.

Most of the 52 percent of Democrats who feel they can’t share their beliefs in public will likely vote for Joe Biden in November.

The Biden campaign, when appealing to moderate Democrats, will try to distance itself from the more radical elements of their party.  But look for Biden’s choice of vice president.  It will likely be someone who will share the agenda of the radical left wing of the party.

Once in power it is reasonable to assume Biden will listen to his VP, and reward his base, by placing people in key positions in his administration, the federal bureaucracy, and the courts that will share the ideology and social agenda of the radical left.

The full power of the federal government will be used to advance an unprecedented liberalization of abortion laws, and use existing civil rights law to suppress dissent from the party line in areas like abortion, religious liberty, transgender “rights,” and family life issues.

Those who want to suppress free speech and attack the religious liberty of those with conservative or traditional views and beliefs will have a sympathetic friend in the Biden administration.

Rod Dreher has been warning for years on his blog about the rise of the soft totalitarianism of the left.  As Tolkien fans know, it’s not so soft when you fall under the gaze of Sauron’s eye. Vicious attacks will follow, orchestrated by left-wing mobs intent upon your social and economic destruction.

And in the case of ousted UNC Wilmington professor Mike Adams, who made the fatal mistake of criticizing the George Floyd riots, the attacks continue even after you take your life in despair.

Esther O’Reilly writes about the media coverage after Adam’s suicide: “Mainstream media headlines from NBC News to Buzzfeed played woke bingo with the news, repeatedly attaching modifiers like ‘racist,’ ‘misogynist,’ ‘vile’—sometimes with the fig leaf of quote marks, sometimes without.”

People are rightly afraid to share their conservative political and religious views and values in the workplace and the public square, and certainly on social media.

Many employees are finding that their corporate human resource departments serve as evangelists for the promotion of divisive, and at times discriminatory, racial politics and tenets of the sexual revolution that violate their conscience and faith. Failure to comply with enthusiasm to the cause is noted and can block advancement and lead to job loss.

The Democratic Party and their allies in media, education, and business — when not defending outright violent riots and censorship of “hate speech” –are smugly winking at the protestors and social media mobs.

They may not want to get the manure on their own designer shoes, but they are more than happy to let the mob to do the dirty work for them — especially if it contributes to a Trump loss in November.

Kevin Burke is a pastoral associate of Priests for Life and the co-founder of Rachel’s Vineyard.

5 Times Biden Dissed Sanders and the Radical Left During the...