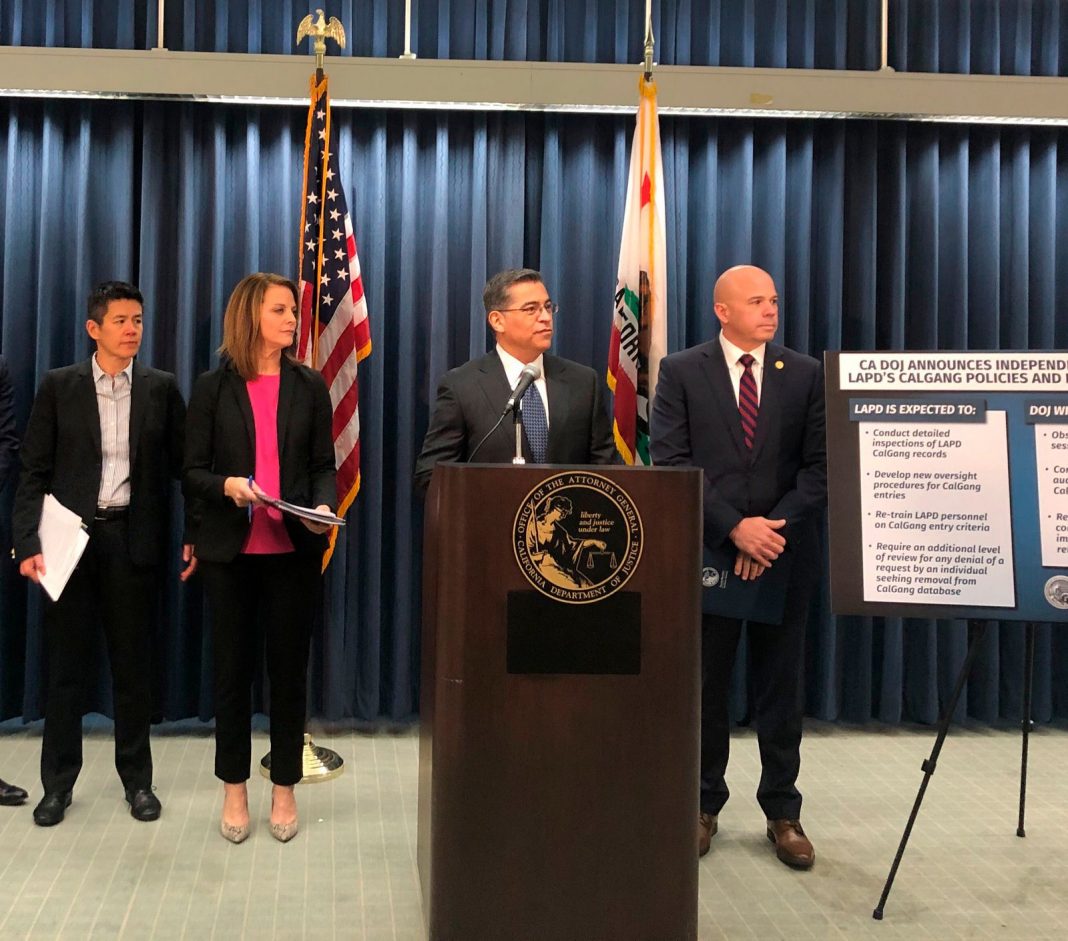 The attorney general could revoke or suspend the department’s access to the database, called CalGang. It is a statewide criminal intelligence compilation of 80,000 gang members and associates statewide used by local, state, federal and tribal law enforcement agencies to share information.

It is used by the Los Angeles Police Department more than any other agency and at least 20 members of the department’s Metropolitan Division are under investigation after authorities found inaccuracies on field interview cards that police officers fill out after stopping and questioning people.

The department has presented the case to Los Angeles County prosecutors for possible criminal charges.

Becerra said authorities still do not know how many innocent people were erroneously listed as gang members in the database and declined comment when asked if other agencies are also being investigated.

False or inaccurate data contaminates a system that is reliant on the integrity of its data, he said.

While Becerra said the database is used as an intelligence-gathering tool, gang sentencing enhancements increase penalties in criminal cases.

A critical state audit in 2016 found that the long-troubled database lacked oversight and that some agencies could not substantiate some of the listings. Becerra, whose office was granted oversight of the database the following year, said officials are working on additional reforms to the system.

The attorney general’s office plans to audit the police department’s CalGang entries beyond those entered by Metropolitan Division members.

Authorities will also review body camera video, including footage of police interactions with people who were characterized as gang members in the database. And officials will review the department’s accountability policies and observe the re-training of officers who use the database.

Police Chief Michel Moore has recommended that one Metropolitan Division officer, whose name has not been made public, be fired. The officer will face an internal administrative tribunal and two others are suspended.

Becerra said the police department did not inform the attorney general’s office of its probe until after media reports surfaced. The department has promised to investigate the alleged misuse and institute reforms.

“The California Gang Database is a critical tool for law enforcement in its efforts to solve violent crime and any information entered must be accurate,” Moore said in a statement after Becerra spoke with reporters. “We are committed to holding anyone who falsified information accountable and will also fully cooperate with the State Attorney General office.”

The Los Angeles Police Protective League’s board of directors, the union that represents the department’s rank-and-file officers, said in a statement that it supports increased transparency for the database and praised the additional training.