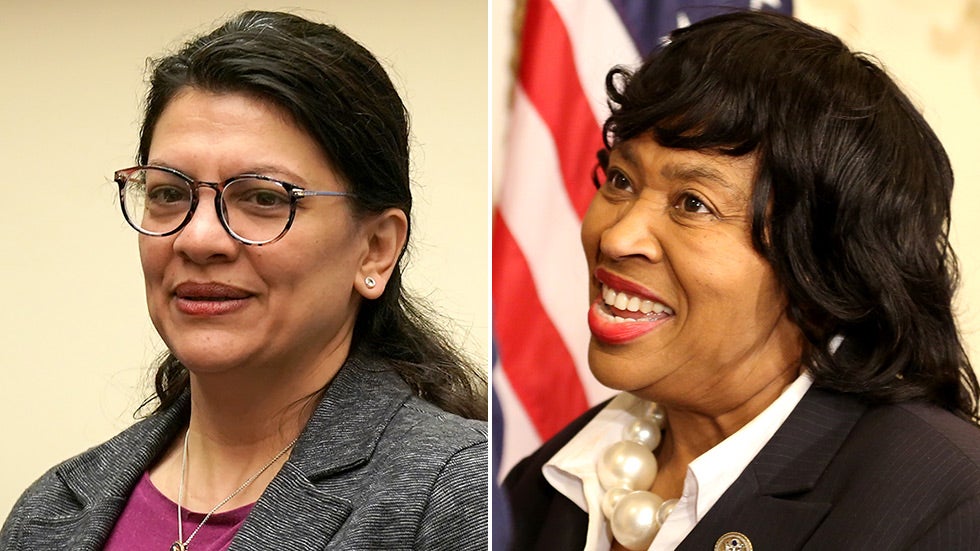 Rep. Rashida TlaibRashida Harbi TlaibTrump holds mini-rally at Florida airport Tlaib opens up about why she hasn’t endorsed Biden yet On The Money: Congress set for brawl as unemployment cliff looms | Wave of evictions could be coming for nation’s renters | House approves 9.5B spending package MORE (D-Mich.) is facing a formidable challenge from former Rep. Brenda Jones (D-Mich.) in Tuesday’s primary, putting the political future of the progressive first-term congresswoman in the balance.

Tlaib gained national name recognition in 2019 when she became a member of the “squad,” four progressive congresswomen, including Rep. Alexandria Ocasio-Cortez

Alexandria Ocasio-Cortez,200 may be enough in Mitch McConnell’s hometown of Louisville, but not in most US cities Democrats go big on diversity with new House recruits Progressives lost the battle for the Democratic Party’s soul MORE (D-N.Y.) and Ilhan Omar

Ilhan OmarTrump holds mini-rally at Florida airport Tlaib opens up about why she hasn’t endorsed Biden yet The Hill’s Campaign Report: Campaigns prepare for homestretch run to Election Day MORE (D-Minn.), who were elected in 2018.

She notably made headlines when she called for President Trump

Tlaib now faces a serious challenge from Jones, a well-known leader in Detroit currently serving as the president of the city council, in the 13th District primary.

Jones narrowly defeated Tlaib in the special election to fill the remainder of the term of late Rep. John Conyers

However, Tlaib pulled off a win in the six-way primary to replace Conyers and Jones when the new term was due to start in 2019, in a race that took place on the same day as the special election.

“It’s the Conyers district. Notwithstanding how his career ended, the man’s a civil rights hero. That’s certainly an advantage for Brenda Jones in this race,” said Adrian Hemond, a Michigan-based Democratic strategist, regarding Jones, who’s African-American.

Recent polling shows Tlaib with a significant edge over Jones. A Target-Insight survey released earlier this month showed Tlaib with 52 percent support, while Jones trailed at 24 percent support. However, 23 percent of respondents said they were undecided.

However, Jones was outspent by Tlaib and still narrowly defeated her in the special election to fill Conyers’s term, making it likely the primary on Tuesday will be very competitive.

Jones has longstanding political connections within the district, as well as in Detroit’s Black community.

“We certainly don’t have the same kind of dollars to match Ms. Tlaib’s bankroll,” said Marvin Beatty, a member of Jones’s campaign leadership team. “But our dollars come from the community, from southeast Michigan,” he continued, adding that the polling of the district may not be completely reflective of the area’s large Black population.

Jones’s campaign has hit Tlaib for being too-Washington focused, pointing to a number of public verbal conflicts playing out between her and President Trump, who has often gone after the Squad members.

“Fulfilling the needs of the community, the district, is what people are interested in,” Beatty said. “Not necessarily calling out the president, who should be called out, but not at the expense of a local community.”

Michigan’s 13th District has been described as one of the poorest congressional districts in the country. According to CBS News, one-third of Detroit’s Black population lives in poverty.

Jones has campaigned on a number of local issues, including providing greater access to affordable health care, internet access, and education.

“[Jones has focused on] how this district can really modify, change its economic circumstance,” Beatty said.

Meanwhile, Tlaib, a Detroit native, has long been involved in activist circles in the city, receiving endorsements from a number of labor and community advocacy organizations.

She has also garnered endorsements from both wings of the Democratic Party, including progressive Sen. Bernie Sanders

Bernie SandersGOP lawmaker: Democratic Party ‘used to be more moderate’ 4 reasons why Trump can’t be written off — yet Progressives lost the battle for the Democratic Party’s soul MORE (I-Vt.) and Speaker Nancy Pelosi

The congresswoman also enjoys widespread popularity in her district, due to her work in constituent services. Tlaib’s campaign touts her work to help authorize $22.5 billion for lead water pipe replacements as a part of an amendment to the House Moving Forward Act. The act is aimed at helping Americans in areas, like the 13th District, get access to clean water.

Detroit’s longstanding issues with water shutoffs have been amplified even more by the coronavirus pandemic, given that hand hygiene is a key element of stopping the virus’ spread.

“It’s a mixture of exceptional constituent services and also meaningful legislation, and folks have been really receptive to that,” McCampell said.

The coronavirus pandemic will almost certainly play a role in how the district’s voters cast their ballots on Tuesday, with strategists predicting an uptick in mail-in voting to avoid large crowds at polling stations.

Some argue that an increase in mail-in voting will bode better for Jones, who handedly carried the absentee ballot support two years ago.

“Congresswoman Tlaib lost badly on absentee ballots, but she won going away with Election Day voters,” Hemond said. “That formula obviously does not work under the current pandemic conditions. So my question is: has Congresswoman Tlaib fixed the absentee voter portion of her campaign? And if she has, then she should prevail.”

Others say that Tlaib’s increased name recognition since taking office in 2018 will likely help her with absentee voters.

“Rashida Tlaib is seen as a hero in Michigan and nationally,” said Adam Green, the co-founder of the Progressive Change Committee (PCCC), which has endorsed Tlaib. “That means her voters are immensely enthusiastic, which is the ballgame in this vote-by-mail world and pandemic era when people are struggling and have many other things going on in their lives.”

Experts also argue that Tlaib campaign’s organizational game has also likely expanded and improved, given her 1-1/2 years of experience on Capitol Hill.

“Now Tlaib has been in office for two years, and she’s got an established organization and the fundraising to do the kinds of things you need to do to get your voters to file absentee ballots,” said Jonathan Hanson, a public policy lecturer at the University of Michigan.

“Detroit has shown its willingness to back leaders of a variety of types if the people are getting things done,” he said.