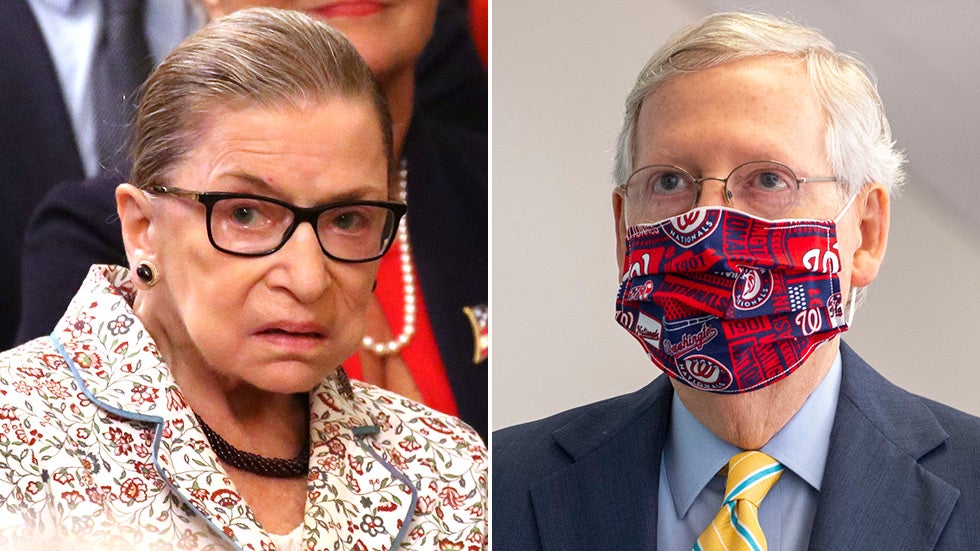 Senate Republicans are conflicted about what to do if a Supreme Court seat becomes vacant during the remainder of President TrumpDonald John TrumpOklahoma City Thunder players kneel during anthem despite threat from GOP state lawmaker Microsoft moving forward with talks to buy TikTok after conversation with Trump Controversial Trump nominee placed in senior role after nomination hearing canceled MORE‘s first term, a possibility that has come more into focus in recent weeks in light of Justice Ruth Bader Ginsburg

Addison (Mitch) Mitchell McConnellGOP scrambles to fend off Kobach in Kansas primary Meadows: Election will be held on November third Don’t let Trump distract us from the real threat of his presidency MORE (R-Ky.) has made clear that he intends to fill a Supreme Court vacancy in 2020, despite holding the seat vacated by the death of late conservative Supreme Court Justice Antonin Scalia open during the 2016 presidential election.

“Oh, we’d fill it,” McConnell said with a smile when asked last year whether he would act to confirm a Trump nominee to the Supreme Court should a seat become vacant.

The GOP leader doubled down on that promise earlier this year.

“If you’re asking me a hypothetical … we would fill it,” McConnell told Fox News in February.

Scalia died in mid-February of 2016 and Obama nominated Garland, who was thought to have bipartisan support, on March 16, 2016.

Any effort to fill a vacancy in the few months before Election Day or in a lame-duck session should Trump lose would be met with furious resistance from Democrats and allied advocacy groups.

“It would be outrageous to go back on their purported principles,” said Daniel Goldberg, legal director of the Alliance for Justice Action Campaign, a liberal advocacy group.

“It was not just keeping Merrick Garland off the bench, it was keeping a highly-regarded, eminently qualified jurist who enjoyed broad bipartisan support, who was recommended by Orrin Hatch, off the bench,” he said.

Grassley, who now serves as the chairman of the Senate Finance Committee, said he’s inclined to follow the same course Republicans adopted in the last presidential election.

The Iowa senator said he doesn’t like to speculate about the health of specific Supreme Court justices. “In the abstract” he emphasized: “I would do the same thing in 2020 that I would in 2016.”

Graham, who is up for reelection in November, says whether he would move to fill a Supreme Court vacancy this year would depend on the opinions of GOP colleagues.

“We’ve got to see where the market is, what other senators think,” he said.

Graham said he’d be “willing” to fill a vacancy but cautioned: “I’d like to get input from my colleagues.”

“I don’t know. We’ll see,” he added. “I hope everybody stays healthy on the Supreme Court and we don’t have to worry about it.”

Graham added that he expects Trump will release a list of conservative nominees in the next few weeks. He said he’d pick from that list if there’s a Supreme Court vacancy this year or if there’s a vacancy in a second Trump term, should he win reelection.

Speculation over the possibility of a Supreme Court confirmation battle has picked up in recent days after Ginsburg, 87, announced last month that she had undergone treatment of liver cancer. Ginsburg was also reported to be hospitalized last week for what was described as a “minimally invasive nonsurgical procedure” to revise a bile duct stent.

The associate justice said last month that a chemotherapy course is “yielding positive results” and she would stay on the court.

“I have often said I would remain a member of the Court as long as I can do the job full steam. I remain fully able to do that,” she said.

“We do not have a vacancy on the Supreme Court. All nine justices are alive,” Collins said.

Romney said: “I’m not at a point where I have something to say.”

Marge Baker, executive vice president for Policy at People for the American Way, warned that Senate Republicans up for reelection would pay a political price for confirming a conservative nominee right before the election after blocking Garland in 2016.

“I do think it’s hard to explain why in 2016 they voted to let the people decide and now in 2020 they would not be doing that. So I think it creates a problem for them in terms of explaining what changed other than who the president is,” she said. “It’s very late in the year, much later than when Merrick Garland was nominated.

“It’s not clear to me that this is a fight that the Republican senators would want,” she added.

John Randolph ThuneFrustration builds as negotiators struggle to reach COVID-19 deal Unemployment benefits to expire as coronavirus talks deadlock McConnell tees up showdown on unemployment benefits MORE (S.D.) says he would support filling a vacancy before the election but expressed uncertainty about acting during the lame-duck session between Election Day and Inauguration Day on Jan. 20 should Trump lose reelection.

He says a vacancy should be filled “if the vacancy were to occur pre-election.”

“If the election is over and the president is still the president, then I think it’s fair game. If there was a change in administration, obviously you got a lame-duck administration. That’s perhaps is a different scenario,” he said.

Joshua (Josh) David HawleyMcConnell: 15-20 GOP senators will not vote for any coronavirus deal Trump plans to order Chinese company to sell TikTok’s US operations: reports Hillicon Valley: Trump raises idea of delaying election, faces swift bipartisan pushback | Amazon, Apple, Facebook, Google release earnings reports | Senators ask Justice Department to investigate TikTok, Zoom MORE (R-Mo.), a rising conservative star who was elected in 2018, says the Senate should confirm a Supreme Court nominee this year and argued a key distinction between now and 2016 is that four years ago Obama was ending his second term while Trump now has a chance to serve another four years in office.

“If there’s a vacancy and there’s a nomination, I’d be in favor of moving to fill it,” he said.

“In 2016 you had a lame-duck president who was not going to be there no matter what. This time you’ve got a president who is running for reelection. He’s on the ballot in November. The Supreme Court is going to be a central issue of the campaign,” he said, although he acknowledged a confirmation would be a “big, heavy lift.”