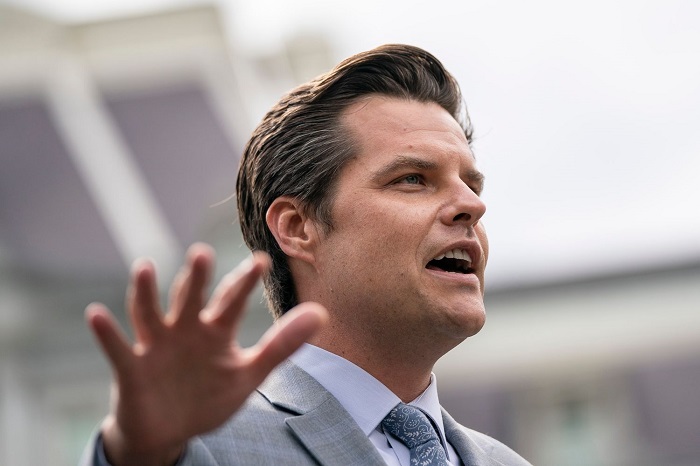 POLITICO’s Ryan Lizza brings us inside of Trump’s and Biden’s campaigns as they enter the final stretch — under circumstances unlike any election in U.S. history.

The early feuding that has already erupted inside the House GOP is being fueled by Trump’s dismal poll numbers and growing fears that Republicans could sink even further into the House minority, underscoring the anxiety in the GOP conference just three months before the election.

Several sources familiar with the party’s internal dynamics cautioned that any potential effort to push out the top Republican leaders might be difficult. Only a simple majority is needed to secure a leadership post in the House minority, and the caucus does not contain a deep bench of potential challengers. There are also positions lower down that could become competitive and offer an outlet for ambitious Republicans, from head of the House GOP’s campaign arm to an open slot as vice conference chair.

But Trump loyalists and more establishment-type conservatives are already trying to stake out ground ahead of the elections: During a recent private GOP conference meeting first reported by POLITICO, some of Trump’s fiercest allies unloaded on Cheney for not being loyal enough to the president and said she’ll be to blame if Trump and the GOP stumble in November.

The infighting then spilled into public view, with Rep. Matt Gaetz (R-Fla.) calling on Cheney — the highest-ranking Republican woman — to be removed from her position as conference chair.

“There are a lot of folks interested in change,” said Gaetz, who has taken particular issue with Cheney’s previous support for a primary opponent to Rep. Thomas Massie (R-Ky.). “I just don’t understand how we’re going to win the majority back if our leadership is coming after our members in primaries.”

“I always knew Liz to support ‘forever wars,’ but I hope she doesn’t want a forever war with her own conference,” he added in an interview.

Cheney stood her ground during the closed-door meeting and hit back at Gaetz with a jab about his upcoming HBO documentary on his efforts to “drain the swamp”; she also publicly vowed to continue speaking out against Trump whenever she feels it’s necessary.

GOP leaders have sought to put on a united front and downplay suggestions that the party is fractured heading into November. But the dust-up offered a sneak peak of the potentially messy battle to come.

“I think this is all about what’s gonna happen in November. The Freedom Caucus guys are trying to put [Cheney] back in her corner,” said another GOP lawmaker, granted anonymity to speak candidly. “She is playing the long game. Folks in Conference are figuring that out.”

Cheney’s public critiques of Trump and strong support of Dr. Anthony Fauci have been interpreted by some of Cheney’s colleagues as an attempt to build a distinct brand within the GOP and position herself in case Trump — and McCarthy or Scalise — falters, though no one thinks she’s rooting for that scenario.

By contrast, McCarthy and Scalise have both closely tied themselves to Trump; the president even fondly refers to the minority leader as “my Kevin.” A broad GOP defeat could lead to calls for new leadership as the party searches for answers — and a scapegoat.

“Not sure McCarthy and Scalise are prepared to be in the minority and with a Dem President,” the GOP lawmaker said. “Members are already beyond frustrated. That will boil up and get more ugly.”

Said another Republican member: “I think there is going to be a problem in leadership if there’s a loss … If we gain some seats, I think Kevin will stay there.”

But even if Republicans lose the White House and additional House seats, McCarthy and Scalise might be just fine. The makeup of the GOP conference has grown more conservative in recent years and a smaller House GOP with fewer moderates could be even more Trumpy after November, regardless of whether the president sticks around another four years. Embracing Trump tightly is hardly a sin in today’s GOP.

McCarthy’s allies also argue that the minority leader’s fundraising chops, relationships with members and efforts to lead the party through impeachment would boost his case. Scalise, meanwhile, has earned plaudits for helping the GOP clinch a number of wins on procedural floor votes and is also a strong fundraiser; he has never faced a leadership challenge.

There’s also the issue of who, if anyone, could mount a serious challenge to the top GOP leaders.

Cheney — an ambitious, fast-rising star in the party — has been floated as a potential speaker or leader one day. The Wyoming Republican even passed on a bid for an open Senate seat to stay in the House, a clear sign of where her priorities lie. Her allies have lauded Cheney’s messaging tactics and forthrightness while still remaining loyal to Trump’s conservative agenda; they also think she could help the party make sorely needed inroads with women voters.

But the blowup with Trump’s allies — and a public rebuke from Trump on Twitter — have raised new questions about Cheney’s future and her upward mobility in the House GOP, especially if Trump does win. Cheney’s fundraising also pales in comparison with that of McCarthy and Scalise, though her office pointed out that’s because she is focused on raising money directly for candidates and the campaign arm.

Rep. Tim Burchett (R-Tenn.) acknowledged that Cheney’s critiques of Trump could hurt her. But, he added, “you’ve got to realize, in families there’s always disputes.”

“I don’t think there’s any ramifications for her,” added Rep. Mark Green (R-Tenn.). “She’s doing such a good job.”

Pushing out the highest-ranking woman in the GOP could also be bad optics — unless a different woman lands a spot somewhere in leadership. Gaetz declined to name a potential challenger to Cheney and said he doesn’t want the job himself.

Cheney secured her current leadership post by announcing a challenge to another lawmaker, but it’s unclear whether she’d be willing to make a play for a higher position if it means taking on McCarthy or Scalise. When she announced her plans to stay in the House, she went out of her way to say she looked forward to seeing McCarthy as speaker.

At a recent news conference, Cheney downplayed the dispute with her conservative colleagues and instead focused on highlighting how awful a Biden-Schumer-Pelosi agenda would be for Republicans.

“Certain groups like to throw stones a lot. Leadership has to take it and roll with it, and that’s what she’s doing,” said Rep. Jaime Herrera Beutler (R-Wash.), alluding to the hard-line House Freedom Caucus’ recent ambush of Cheney. “For anybody to be agitating, maybe there’s just personality differences.”

It was only two years ago that Rep. Jim Jordan, a notorious troublemaker for leadership and co-founder of the Freedom Caucus, unsuccessfully challenged McCarthy for GOP leader. Since then, however, the Ohio Republican has been seen as more of a team player and even earned a coveted role as the ranking member of the House Judiciary Committee.

But during the contentious GOP conference meeting, his colleague saw glimmers of the old Jordan as he piled on Cheney, suggesting that her Trump criticism could hurt the president and the party at the polls — the exact type of argument that he or his colleagues would likely make if they try to target Cheney after an electoral bloodbath.

“If a president goes down, then you don’t win back a majority,” said Rep. Louie Gohmert (R-Texas), who also spoke up against Cheney during the meeting. “People are always free to speak their minds. But we’ll see how it goes from here to November.”

It’s the U.S. Government’s Job to Decide Whether the NBA Operates in China

It’s the U.S. Government’s Job to Decide Whether the NBA Operates...