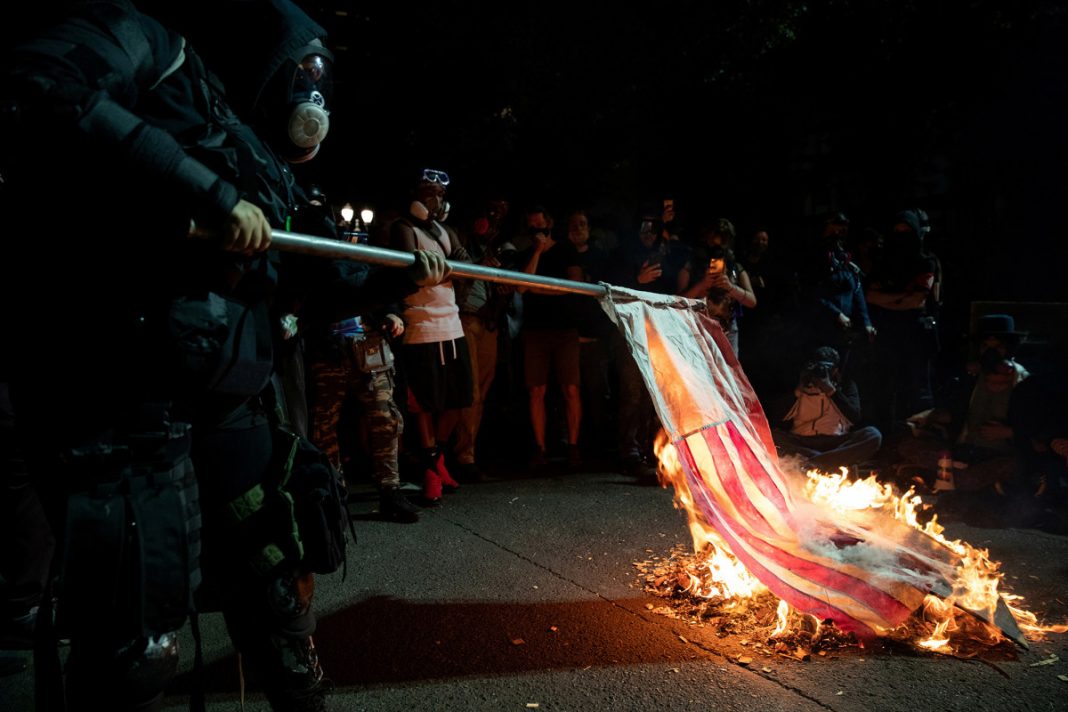 Protesters burned an American flag and a Bible in Portland, Oregon, sparking outrage just as weeks of violent demonstrations seemed to be coming to a close.

For more than 60 days, Black Lives Matters demonstrators, including a “Wall of Moms” and a “Wall of Vets,” have clashed with federal agents in the city, drawing national attention as authorities blasted marchers with tear gas and the civilians at times responded with weapons of their own — such as feces, bleach, bricks or batteries.

Friday night’s demonstrations were largely peaceful, appearing to mark a break from the chaos as federal agents made a recent deal to allow local authorities to handle the protests.

But just after midnight, marchers were caught on video using the flag and holy book as kindling for bonfires lit outside the federal courthouse, which has been a focal point of rioting after the death of George Floyd in police custody in May, according to a news report.

“Left-wing activists bring a stack of Bibles to burn in front of the federal courthouse in Portland,” claimed Ian Miles Cheong on Twitter Saturday.

The post featured a video which showed protestors with “Black Lives Matter” signs tossing bibles into a raging bonfire. The video, which has gone viral, had more than 1.8 million views and thousands of retweets.

“Now we move to the book burning phase,” said Donald Trump Jr. in a tweet Saturday. “I’m pretty sure ANTIFA doesn’t actually stand for what they say it stands for. Maybe just remove the anti part of [their] name and it’s perfect,” he wrote.

The fire was later put out by members of Moms United for Black Lives Matter, who doused the flames with bottles of water and stomped on the embers, according to KOIN 6, a local CBS affiliate television station in Portland.