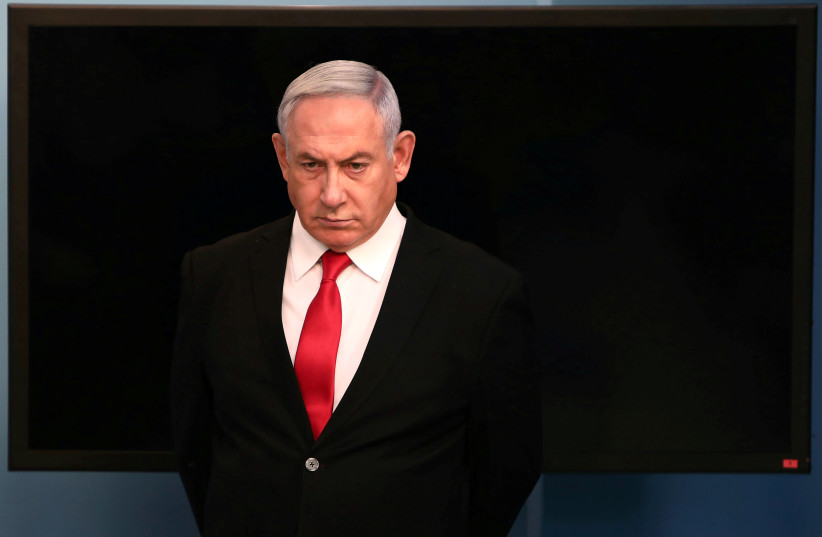 In a ferocious tirade against the Israeli media, Prime Minister Benjamin Netanyahu denounced the Israeli media for what he alleged was its “one sided” coverage of anti-government protests, and accused Israeli news outlets of acting like the media in totalitarian North Korea.

Following comments by Alternate Prime Minister Benny Gantz in the weekly cabinet meeting Sunday morning on the recent protests, Netanyahu said he deplored violence “by any side,” but then lambasted the media over

“The protests are being fueled especially by the media who have enlisted themselves [to the protests] in a manner the like of which I cannot remember,” Netanyahu continued.

I reject the one-sided attitude of the majority of the media. They are not reporting on the protests but participating in them, and fueling them. This is not just media which has got on board [with the protests] but is enlisting people to the protests,” continued the prime minister.

“They are fueling the protests which are violent who no one is speaking out against,” he railed, citing an incident in which a policeman was seriously injured during one protests and needed surgery, about which Netanyahu said he heard no condemnation, and even that the policeman was at fault.

“When there is wild incitement without restraint including daily calls to murder the prime minister and his family the media ignores it and the politicians are silent,” said Netanyahu, saying the situation would be very different if similar calls were made against the president.
There has never been such a distorted mobilization [of the media]. I would have said Soviet [media mobilization], but its already North Korean in manner,” concluded Netanyahu.

Opposition leader and Yesh Atid chairman MK Yair Lapid condemned Netanyahu’s comments, and rejected his claim that the government was accommodating in its approach to the protests.

“Protests are the foundational right of citizens in a democracy. You failed in managing the [COVID-19] crisis. You failed in dealing with the unemployed and self-employed because you were dealing with your tax benefits and your criminal cases,” Lapid alleged.

“You are cut off from the public and have lost their trust. The only way of stopping these protests is for your to resign.

Meretz faction chair MK Tamar Zandberg said Netanyahu was “marching in the direction of dark regimes” with his comments.

“The prime minister does not miss an opportunity to incite against Israeli democracy, against protestors, and against the media. Public protest is the lifeblood of democracy, media which covers it us the a basic condition of democracy. The prime minister who attacks these principles without pause or restraint wants to create a dangerous state here.”

Netanyahu’s comments likening Israeli news outlets to North Korean media was the second time in twenty-four hours that he had made such comparisons.

On Saturday night, the prime minister lashed out at channels 12 and 13 for reporting from the demonstrations, and again comparing the media to North Korean TV.

“They are making a desperate effort to brainwash the public, with the goal of taking down a strong prime minister from the Right,” Netanyahu wrote on Facebook Saturday night.

“They’re giving free and endless advertising from a number of broadcast points in an attempt to inflame the left-wing protests and as part of a transparent attempt to inflate their importance and weight,” he continued.

“The television in North Korea could learn from them, but the public is not buying it,” wrote the prime minister.

Tzvi Joffre contributed to this report