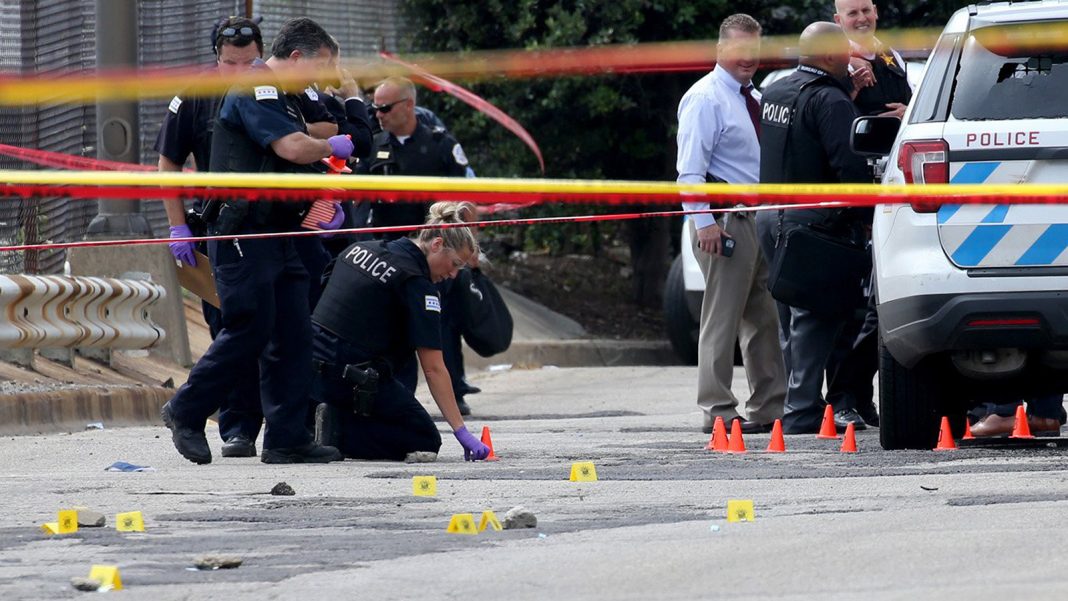 By Megan Crepeau and Jeremy Gorner

CHICAGO — A surprise attack at a Northwest Side police station that left one officer in a coma and several others injured began after a carjacking suspect “squirmed and shielded his body” during a pat-down — successfully concealing a loaded pistol near his groin area, authorities said.

From the back of a squad car, Lovelle Jordan somehow maneuvered his cuffed hands to the front of his body. He grabbed the gun. And as an officer opened the car door to lead him into the station, he opened fire, prosecutors said Friday.

Multiple officers were hurt in the ensuing shootout Thursday morning. And Jordan, a 25-year-old parolee, was held without bail on attempted murder charges as he underwent treatment for multiple gunshot wounds at Stroger Hospital.

Jordan was charged with six counts of attempted murder of a peace officer, a charge carrying 20 to 80 years in prison, Cook County Assistant State’s Attorney Kevin DeBoni said in court Friday. He also faces multiple other felony counts, including possession of a stolen vehicle, unlawful use of a weapon by a felon and armed habitual criminal.

The sequence of events began routinely enough Thursday morning, when officers saw a stolen white Porsche parked in the North Austin neighborhood, DeBoni said Friday. It had been carjacked at gunpoint a few days before.

The two officers were in their squad car beginning paperwork to have the Porsche towed when Jordan walked directly in front of them and got into the driver’s seat of the Porsche, then started to drive off, DeBoni said in court.

“He walks right up to the Porsche and he enters the Porsche, trying to drive away,” Chicago police Chief of Detectives Brendan Deenihan told reporters at a news conference Friday. “It just shows how emboldened these criminals are. The officers are right there, and this guy walks right past the front of the officers’ car and just jumps in this vehicle, trying to start it and drive away while the officers are right there.”

They tried to get Jordan out of the car, but he “struggled against the officers by stiffening and flailing his arms,” DeBoni said. He also repeatedly reached for his waistband, a signal often understood by police to mean a subject is armed.

As the officers tried to pat him down, he “squirmed and shielded his body from them,” and they only got drugs and some personal items from his pockets, DeBoni said.

So they missed the Glock subcompact pistol, loaded with at least five rounds. Deenihan said the gun seems to have been “extremely secreted” close to Jordan’s groin area.

Jordan was handcuffed behind his back, put in the back seat of a different officer’s police vehicle, and taken to the police station.

At some point, Jordan managed to move his cuffed hands from behind his back and pull out the gun. So when an officer opened the door to get him into the station, Jordan raised the pistol and fired at close range.

It sparked a dramatic gunbattle — much of which was caught on multiple cameras.

The officer was shot in the neck, and fell to the ground. Two nearby officers shot at Jordan, who returned fire from the back seat of the squad car as they called for assistance.

At least four times, Jordan ducked in and out of the back seat to fire and then take cover — then “popped out of the back seat” and ran around the opened door to drop into a crouched firing position, DeBoni said. He continued firing, then moved to the front bumper and shot a police vehicle before running north while still pointing his pistol at the officers, authorities said.

Officers continued to fire. Jordan was hit multiple times and fell to the ground.

Police said as many as 60 shots were fired in the shootout.

The first officer shot, who is assigned to the district and has been a Chicago cop since 2003, was struck in the chin area and bullet fragments ended up in his neck, Deenihan said. That officer was being treated at Advocate Illinois Masonic Medical Center, where he was placed in a medically induced coma to prevent spinal damage and will be reevaluated in two days, according to DeBoni.

Another officer was shot in his bulletproof vest, the bullet glancing off of it. A third officer was hit in the hip by an “unknown object” that left bruising and redness. Two other cops were treated for chest pains.

Meanwhile, Jordan is paralyzed from the chest down. He is being treated at Stroger Hospital and did not appear in court Friday. His attorney, Assistant Public Defender Scott Finger, objected to proceeding on prosecutors’ request to deny bond, since Jordan could not appear in court and attorneys could not present any mitigating information.

Judge Arthur Wesley Willis overruled Finger’s objection and ordered Jordan held without bail. In addition, since Jordan is on parole, the state Department of Corrections issued a no-bail hold on him for the parole violation.

Between 2012 and 2015, Jordan was convicted in three different cases for felony drug possession and delivery. In 2016 he was convicted of aggravated assault after he drove away from police during a traffic stop and then, after getting stopped again, accelerated while an officer had reached her hand into the car — nearly driving over her foot.

He was released from the Pinckneyville Correctional Center less than four months ago after serving time on a gun conviction, records show. He pleaded guilty in 2018 to being a felon in possession of a firearm and was sentenced to five years in prison; with credit for good time and a year in county jail awaiting trial, he was paroled in April.