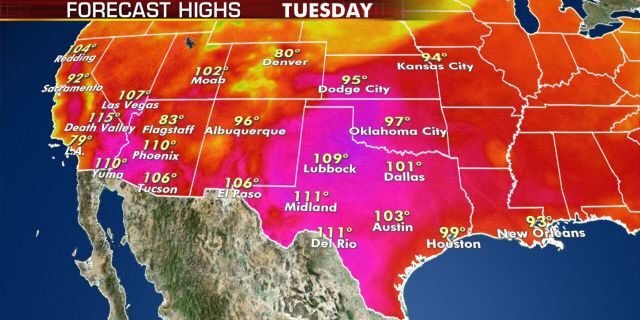 A heat wave that has broken records across portions of Texas will allow temperatures to soar again on Tuesday, as strong storms develop across the Midwest.

Another day of excessive heat and humidity can be expected from the Gulf Coast to the South Central U.S.

In the southern Plains, record temperatures are possible yet again on Tuesday.

HEAT WAVES HAVE BECOME MORE FREQUENT AND INTENSE IN MOST OF THE WORLD SINCE 1950S: STUDY

Soaring temperatures on Monday across northwest Texas sent Amarillo and Lubbock to all-time record high temperatures for the month of July, at 110 degrees Fahrenheit.

Another day of hot weather is forecast on Tuesday from the Gulf Coast into the South Central U.S.

For the city of Lubbock, Monday became one of the top seven hottest days of all time, according to the local National Weather Service (NWS) forecast office.

Much of the Southern Plains to the Gulf Coast will remain very hot and humid, with air temperatures well into the 100s across portions of Texas and Oklahoma.

Heat indices will soar into the 110 range over parts of the Gulf Coast, and humidity will be oppressive.

Excessive heat warnings and heat advisories remain in effect for over 42 million Americans in this region.

SUMMER HEAT LOOKS TO STICK AROUND THROUGH SEPTEMBER FOR MOST OF US, WORSENING DROUGHT CONDITIONS OUT WEST

There is some relief in sight. Conditions are going to improve a little with less intense heat over the next few days.

Severe storms on Tuesday from central Plains to Midwest

The threat for severe weather on July 14
(Fox News)

Strong to severe thunderstorms will pop up again Tuesday from the Upper Midwest down into the southern high Plains.

In a pattern that’s typical for this time of year, the storms will develop from the afternoon in the evening across the region.

Storm reports over the past 24 hours.
(Fox News)

High winds and hail will be the main concerns, along with dangerous lightning and the risk of flooding with some storms.

The risk for wildfires stretches across the West on Tuesday, July 14, 2020.
(Fox News)

Firefighters battling blazes in Colorado and Utah may struggle getting them contained due to the conditions.

An area of low pressure off the coast of New England will bring showers and thunderstorms on Tuesday, along with the risk of localized flooding for the area.

The system is expected to exit into the Canadian Maritimes by Wednesday, but a lingering front could still bring some showers and thunderstorms through the region.