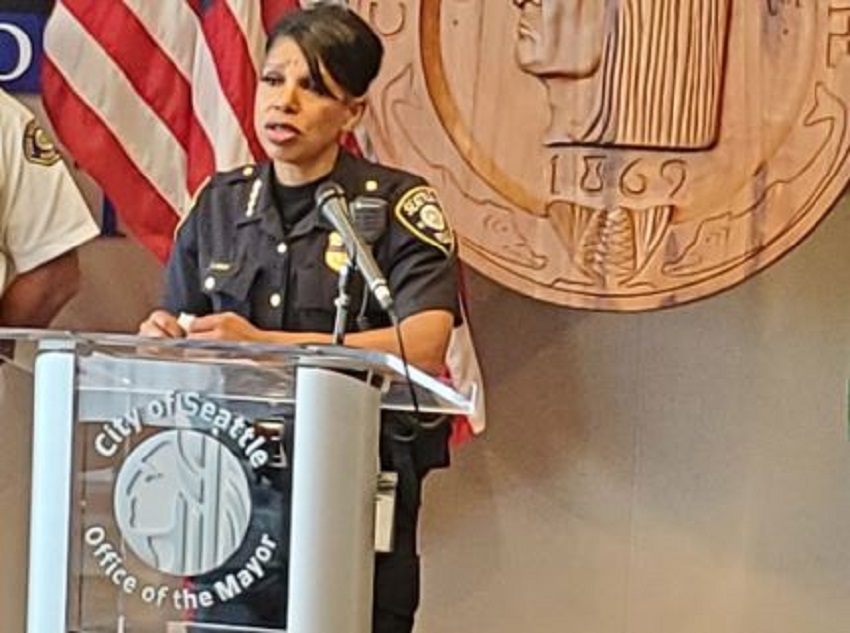 According to KING-TV, Seattle Police Chief Carmen Best described the proposed budget cuts to her department as “reckless” and says they are, “not realistic or rational.”

Chief Best went on to say, “if we are asked to cut 50% of our department overnight, we will be forced into decisions that do not serve our shared long-term goal of re-envisioning community safety.”

Most of the budget cuts that Seattle Mayor Jenny Durkan has proposed for the Police Department were identified in response to the coronavirus pandemic — before Black Lives Matter protests surged in the city — rather than in response to police defunding demands made by protesters.

But City Council members will meet Wednesday to continue dissecting the Police Department’s budget and discussing additional cuts they could make.

Durkan proposed about $20 million in cuts to the Police Department last month, among other changes to Seattle’s 2020 budget that she said would address unexpected city spending related to COVID-19, account for diminished tax revenues during the economic shutdown and combat racial inequity.

Many protesters and organizations, including endorsers of the Decriminalize Seattle campaign, have demanded that 50% of the Police Department’s budget be redirected as soon as possible to other community needs, citing police killings of Black people and institutional racism.

Durkan has asked staff to research by the end of July what cuts of 20%, 30% and 50% would look like as she develops a 2021 budget proposal and has vowed to solicit input from community members.

In the meantime, the $20 million in cuts proposed by the mayor for this year amount to about 5% of the Police Department’s $409 million 2020 budget (about $195 million has been spent so far). But a closer look at the potential cuts reveals a more complicated picture.

— $2.1 million: Allow several civilian jobs to remain vacant as part of a hiring freeze across all Seattle departments.

— $3 million: Save money in planned salary increases for police officers based on the consumer price index increasing less than expected.

Those reductions, totaling about $16 million, all were identified in response to the pandemic and the city’s revenue problems, her office said.

Within the $20 million, the only cut identified in response to the protests is a $4 million reduction in capital expenses related to planning for a new North Precinct police station. It’s not the first time City Hall has paused the project. A previous plan was shelved in 2016 because of public pressure.

The mayor also has instructed the Police Department to stop hiring officers this year. That won’t save much money, according to the department, because more officers than expected were hired at the start of 2020.

Durkan also wants to freeze spending on new police vehicles and replacements, and she wants to pause a Police Department information technology project, according to her office. The administration has yet to say how much money those adjustments are expected to save.

Counteracting the cuts, the Police Department spent $6.3 million in overtime pay in connection with the protests from May 29 to June 9, according to a council presentation.

Four council members — Tammy Morales, Kshama Sawant, Teresa Mosqueda and M. Lorena González — have said 50% of the Police Department’s budget should be redirected, and other council members have said they support reductions to some extent.

They began delving into the Police Department about a month ago, after Mosqueda responded to the Black Lives Matter protests by promising to lead an “inquest” as part of the council’s midyear budget deliberations.

Mosqueda’s budget committee, which includes all nine council members, has discussed the Police Department several times since then.

Takeaways from those meetings include:

— More than $125 million was allocated this year to salaries and benefits for more than 800 police officers assigned to patrol and detective duties — , not including overtime pay.

— About one-third of the Police Department’s sworn personnel are assigned to respond to 911 calls.

— Durkan and the council allocated the Police Department nearly $30 million in overtime pay in the 2020 budget, with the largest chunks related to planned events, sports and emphasis patrols.

Also last month, The Seattle Times reported that the Police Department’s annual budget grew by 36% over the past five years. The number of officers on the force barely increased, but costs related to employee pay and benefits rose as the Police Department dealt with court-ordered reforms.

Nearly 375 police employees made at least $200,000 in 2019, including overtime pay, according to city records reviewed by The Seattle Times.

Council members have expressed interest in moving certain duties out of the Police Department and have a presentation scheduled for Wednesday on what 911 calls officers respond to, as have the mayor and Police Chief Carmen Best; violent crimes make up about 1% of all calls for service by Seattle police, according to an analysis by The New York Times.

More than half of all calls were categorized as noncriminal last year, though more time is spent on criminal calls, according to the Police Department. Among all 2019 dispatches, 3% resulted in the call disposition “arrest made.”

Councilmember Andrew Lewis announced Monday he would introduce legislation to divert some money from the police to a new mental-health and substance-addiction first-responder program with unarmed medics.

The Durkan administration recently launched a similar program out of the Fire Department.

Decriminalize Seattle is scheduled to present to the council Wednesday strategies for defunding the Police Department.