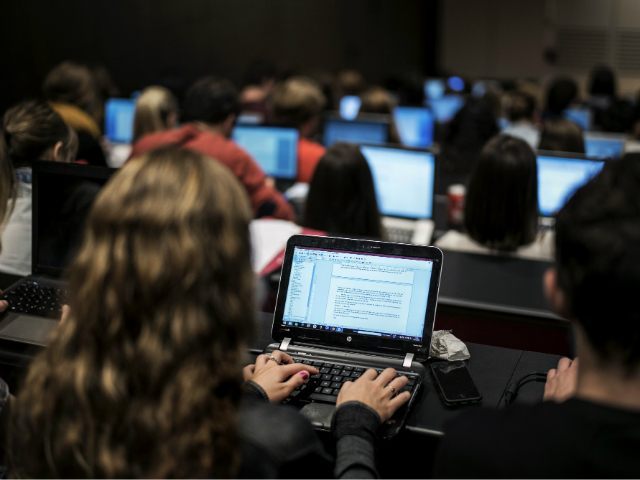 Hanson reflected on standard leftist academic characterizations of Western Civilization. He said, “Today’s student works a couple of hours a day to help pay the cost [of schooling]. They have big debt and they’re at school six or seven hours [per day], and then they have an hour or two at home. That used to be history, literature, math, science, physics. It’s not anymore. Believe me, I’m in the university. It is gender studies, peace studies, and to the degree that it is history, it is how the Europeans raped Africa or destroyed it. That’s what they’re getting.”

Hanson continued, “If you want a long-term solution to that indoctrination, you have to address that, and how do you address that when they control universities? The faculty is 95 percent left-wing; the administration is 100 percent.”

“Why does Harvard have a $50 billion tax-free endowment to subsidize this?” asked Hanson, referring to Harvard University’s propagation of left-wing and partisan Democrat politics. “[Donald Trump, the House, and the Senate] should say, ‘You know what? Any university [with an endowment valued] over a billion dollars — that income, after that — that’s going to be taxable. We’re not going to pay for this. You’re just going to pay income tax on that.’”

Liability for absorbing the cost of defaults on federally-funded student loans should fall onto colleges and universities with endowments valued above $500 million, Hanson advised. Post-secondary institutions that are beneficiaries of federal student loans should be responsible for them, he held.

Hanson urged, “[Trump, the House, and the Senate] are going to have to say, ‘If you want to issue $1.6 trillion in student loans while you jack up the tuition higher than the rate of inflation, you’re going to have to accept moral hazard. So Stanford, USC, or UCLA want to have student loans? Fine, but then if they default, you’re responsible for them, not the federal government.’ They have huge endowments. They should say, ‘Any university with an endowment of over half a billion dollars has to guarantee their own student loans.’ That would be a big help.”

Colleges and universities violating rights guaranteed by U.S. Constitution should not receive federal funds, determined Hanson, addressing “cancel culture” and the ubiquitous use of threats and intimidation to shut down dissident voices across campuses.

“They need to tell the universities, ‘You’re not a sanctuary place,’” Hanson stated. “‘The U.S. Constitution is there on your campus. If you do not allow First Amendment rights of free expression to guests, or if you deny somebody the fourth, fifth, and sixth amendments when they’re accused of sexual assault — no right of cross-examination, no right to bring in witnesses — then we’re gonna have to cut federal funds,’ and I think you could really stop the university behaving a certain way.”

Breitbart News reported on the growth of demand for skilled trades outpacing the available supply of capable workers. NPR wrote in 2018, “While a shortage of workers is pushing wages higher in the skilled trades, the financial return from a bachelor’s degree is softening, even as the price — and the average debt into which it plunges students — keeps going up.”

Universities should be compelled to provide itemized billing to students and a forecast of their expected earnings after graduation so that prospective students are better informed prior to enrollment, Hanson advised.

“We should make every university, when a person is enrolled, get them a contract and say, ‘You are going to pay a $100,000, and here it is. X percent for dorms, administration, [recreation] centers, and a diversity coordinator.’ Just like when we buy a car, break down all the costs and say, ‘This is what you’re going to owe when you graduate, and here’s the major. These are the majors, and here’s what these majors pay on average when you graduate.’”

Hanson continued, “If they did that, I have a feeling a lot fewer people would want to go, you know. Eighteen and 19-year-olds are not sophisticated. They’re just told, ‘Go to college, and you’ll make more money, and you won’t have to work in a plant.’ No, it doesn’t work that way. Go to college, borrow $200,000 for your sociology degree, work at Starbucks, move to the city, get pissed off, and then go riot. That’s pretty much the formula for Antifa.”

Retirement Due to ‘Overarching Lack of Respect for the Officers’

Spat between Ben & Jerry’s, UK govt. over treatment of migrants heat up

Retirement Due to ‘Overarching Lack of Respect for the Officers’

Spat between Ben & Jerry’s, UK govt. over treatment of migrants...