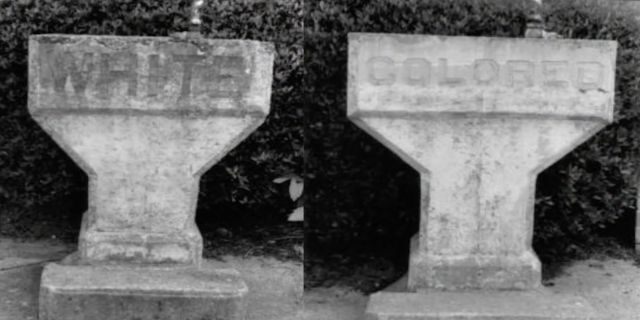 On Monday the Jones County Board of Supervisors unanimously agreed to a motion that would allow the county to begin investigating what it would need to do to remove the two once-segregated water fountains that sit at the entrance of the Jones County Courthouse. The Jim Crow-era fountains, respectively, have the words “White” and “Colored” engraved on them, though the words are now covered with plaques.

Since the move to explore their removal, people have flocked to the once-segregated water fountains to get a look for themselves and to snap photos, including Amiah White, who told Fox News she would like to see them removed for the sake of healing Mississippi’s long-standing racial divisions.

“It might play a small part in the racial healing, but I feel like that small part may make a big difference,” White said.

The formerly segregated water fountains have the words “white” and “colored” inscribed on them. The Jones County Board of Supervisors voted to cover the wording with historical plaques in 1989. (Mississippi Department of Archives and History)

One woman, who showed up to the courthouse to take pictures of the water fountains and only wanted to be identified by her first name, said she didn’t really understand why some people were upset.

The water fountains have been the center of attention once before, in 1989. According to the Associated Press, county officials refused an offer from the Mississippi Department of Archives and History to remove the water fountains and move them to the state history museum in Jackson. The department suggested replacing the fountains with replicas that wouldn’t remind people of past segregation laws. Instead, county officials voted to cover up the wording on each fountain with historical plaques.

The formerly segregated fountains now have plaques on them that hide the words “white” and “colored.” (Fox News/Charles Watson)

Fox News reached out to each of the five county supervisors and left a message for the county administrator for comment on the most recent vote, but had not heard back by the time of publication.

Exploring the removal of the once-segregated water fountains has come to light just days after the Mississippi lawmakers voted to officially retire the state’s flag, which prominently displayed the Confederate emblem on it, and put the 126-year-old flag on display at the Mississippi History Museum.

The Mississippi Department of Archives and History will have to give its approval before the water fountains in Ellisville are removed and possibly moved to a state museum.

Most people in town who we spoke to agreed that they would like the water fountains to be preserved for history’s sake.

Cindy Ruffin said, “Let the history continue on. It doesn’t bother me. Like I said, the more we learn, the more we know.”

It’s not clear when a final decision will be made on the once-segregated fountains. And as lawmakers around the country grapple with removing Confederate monuments, which many regard as symbols of hate, White said she was glad people in power were beginning to listen to African Americans and understand their painful history in this country.

“I think it’s long overdue,” she said. “We as African Americans have spoke up and that’s why lawmakers are now speaking up.”