Home Conservative Life Johnny Depp scrawled ‘I love u’ in his BLOOD with severed finger... 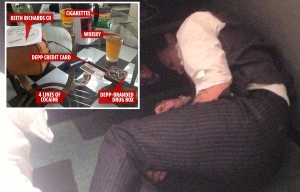 JOHNNY Depp scrawled “I love u” in his own blood with his severed finger stump after allegedly throttling Amber Heard in a three-day hostage rage, the High Court heard today.

The 34-year-old actress allegedly had to barricade herself into a room after Depp is said to have torn off her nightgown and shoved her onto a ping-pong table, choking her against the fridge in an attack five years ago in Australia.

During the alleged attack, Depp severed his finger. He claims Heard threw a vodka bottle at him but she has said that he had injured himself smashing a phone against the wall.

The court heard the star then used the bloody stump to scrawl “I love you” on the wall.

The graffiti also read “Call Carly Simon, she said it better, babe” in a reference to the singer’s song You’re So Vain – a message that Depp alleged Heard had written in lipstick.

The 57-year-old — who is suing The Sun for calling him a “wife beater” in a 2018 article — has “vehemently” denied violence against Aquaman star Heard.

Heard claimed she was left with “cuts all over her body” – slashed by shattered glass strewn across the floor as she was chased round the room and slammed against a counter top by Depp, the court heard.

Details of the alleged attack in 2015 were read from a witness statement, including claims that Heard had been “scared for her life” telling Depp “You are hurting and cutting me”.

But Depp today insisted that the only attack on the trip had been launched by Heard when she hurled a vodka bottle at him and caused the infamous injury which cut off the top of his finger.

Heard claims the injury came about after he smashed a telephone into the wall during the bust up while the couple were in Australia for Depp to film Pirates of the Caribbean: Salazar’s Revenge.

Depp said he later lied to the film production team, telling them he had slammed his finger in a door to “protect” Heard.

A shocking photo shows the tip of the star’s finger sliced off.

It was alleged the star used his own blood and paint to write on mirrors, walls and even a lampshade – causing £59,000 worth of damage – later telling Heard: “Look what you made me do.”

Sasha Wass QC, who is representing News Group Newspapers, said the house was “completely destroyed”, telling Depp: “You were completely off your head on drink and drugs.”

But Depp denied taking illegal drugs, claiming it was Heard who was the aggressor.

He said: “This [graffiti] is a message to her of good luck and to be careful of her ambition to be a big star.

“I went into some kind of breakdown. Some species of nervous breakdown. I was at the end and didn’t want to live at that time.”

Another mirror was covered with black writing including “Starring Billy-Bob” – a reference to Depp’s belief Heard was having an affair with Billy-Bob Thornton.

The third day of the trial today heard how Heard had acted as Depp’s nurse during his detox while they were on holiday on his private island in the Bahamas.

In his witness statement, Depp claimed that he was left sobbing “like a child” when Heard “withheld medicine” from him.

Describing it as “one of the cruellest things that she has ever done”, he said: “My body clock was needing medication to stop the onslaught… I was not in good shape.”

The court was told Heard had been in “regular contact” with Depp’s nurse Debbie Lloyd – at one point texting her saying: “He was so mad he pushed me and I asked him to get out. Don’t know what to do. Sorry to keep at you guys.”

Ms Wass today asked Mr Depp if he remembered the detox being “so difficult you started flipping?”

Mr Depp replied: “I remember that I was in a great deal of pain and uncontrollable spasms … if they are not taken care of immediately there is not much you can do.”

He added: “So flipping would be a word that is correct.”

He was so mad he pushed me and I asked him to get out. Don’t know what to do

However he denied pushing her, saying he was in “no physical condition to push anyone”.

Mr Depp repeated what he had said on Wednesday that Heard’s allegations were part of an “insurance policy”.

The High Court today also heard Amber Heart’s mother Paige had sent Depp a supportive text, telling him: “You’ve gotten through the hardest part, it may be hard to see, but you will be so glad to have this gorilla off of your back.”

She also added: “I’ve seen the hell this addiction brings and I wouldn’t wish this on anyone.”

‘I COULDN’T HAVE MADE IT WITHOUT HER’

Johnny Depp sent a message to his then mother-in-law Paige Heard, praising Amber for caring for him.

The message read: “My dearest Paige, how unbelievably kind and pure your message was.

“I am beyond thankful to have you in my life. There is no luckier man on this earth.

“To have the strength that Amber gives me and the full support of each of you, individually, that I’ve gotten helps immeasurably.

“I don’t need to explain the horrors to you, you know as well as I.

“What you do need to know is that your daughter has risen far above the nightmarish task of taking care of this poor old junkie.

“Never a second has gone by that she didn’t look out for me or have her eyes on me to make sure that I was OK.

“My words are truly feeble in attempting to explain her heroism in a text – suffice to say that I have never met or loved a woman or a thing more.

“She has the strength of a thousand men, and that is due to no one or nothing but you sweetheart. Thank you, I love you.”

The message to Paige Heard continued: “I couldn’t have made it without her (Amber Heard).

“I would have gone for a swim and swallowed a big drink of ocean without her, to be honest.

“It was a hell of my own doing that your little girl walked through with me step by step.

“I know you’re already proud of her, but if you’d have seen her in action – amazing.

“It was an exercise of monumental patience and instinct. I wouldn’t be alive, sweetheart.

“There were more than a few times when I thought it would be more simple to take that route.

“It was Amber and Amber only that got me through this, and it was not easy.”

Depp then replied, telling Paige: “What you do need to know is that your daughter has risen far above the nightmarish task of taking care of this poor old junkie.”

Sasha Wass then read a text sent by Mr Depp to Amber Heard which read: “Thank you so much for getting me f***ing clean baby.”

The court was today shown a clip of Depp slurring at the Hollywood Film Awards in 2014.

Ms Wass said that it showed a “spiralling-down” of Depp’s sobriety, adding: “You were falling off the wagon.”

But the star said he had not been on any illegal drugs and was instead taking prescribed drugs to help him kick his addiction to painkiller Roxycodone.

Dr Kipper said: “He has no understanding of delayed gratification and is quite childlike in his reaction when he doesn’t get immediate satisfaction.”

The star was then referred to Dr Connell Cowan, who wrote in his notes that Depp was “threatened” by James Franco.

The court was told Heard’s movie with the other actor left Depp hospitalised after a drug binge.

Depp also claimed his jealousy over Heard’s visit to Hellraiser novelist Clive Barker had been “provoked”.

Ms Wass read from medical notes dated September 22, which recorded that Mr Depp punched the wall during an argument with Amber Heard and was found “sitting in the kitchen with scraped and bloodied knuckles”.

The barrister said: “It seems to be how you are expressing your anger yet again.”

Mr Depp replied: “I would rather express my anger by hitting an inanimate object than… the person I love.”

And he admitted that while he had blackouts, he still had “snippets of memory”.

He also denied kicking or punching Heard, or calling himself a “savage”.

It comes after explosive claims in court this week heard:

Heard and Depp arrived separately at the High Court today, with Heard wearing a black suit and white shirt and a red handkerchief.

Depp also covered his face with a black and white scarf and sunglasses, wearing a blue suit and tie.

The High Court earlier heard that Depp would transform into “The Monster” during violent drug-fuelled arguments with his ex.

The Pirates of the Caribbean star also told how he did drugs aged 11 and had acquired a liver “resembling Margaret Thatcher” shortly before she died. Depp denies being violent towards Heard.

But he admitted in court: “The Monster came out when our arguments escalated and I would not placate.

“If she was yelling at me, I’d yell back and it would turn into a screaming match.”

Depp said he was never violent to Heard — claiming she was the abuser.

Depp was also accused of other incidents of abuse. It was said Depp struck Heard in 2013 in a row over a painting by her ex Tasya Van Ree.

Ms Wass said Depp hit her “so hard that blood from her lip ended up on the wall”.

The judge was shown a picture taken by Heard of a bruise on her arm, allegedly caused by Depp.

Naya Rivera’s son, 4, said ‘mum jumped into lake and didn’t come back up’

Couple forced to give back garden after spending £22,000 renovating wasteland

Bars & gigs put you at ‘highest risk’ of Covid – so where is most safe?

The actor’s case against NGN and executive editor Dan Wootton arises out of the publication of an article on The Sun’s website on April 27 2018 with the headline “Gone Potty: How can JK Rowling be ‘genuinely happy’ casting wife beater Johnny Depp in the new Fantastic Beasts film?”.

NGN is defending the article as true and says Mr Depp was “controlling and verbally and physically abusive towards Heard, particularly when he was under the influence of alcohol and/or drugs” between early 2013 and May 2016, when the couple split.

If you are affected by domestic abuse, please call the National Domestic Abuse Helpline on 0808 2000 247.