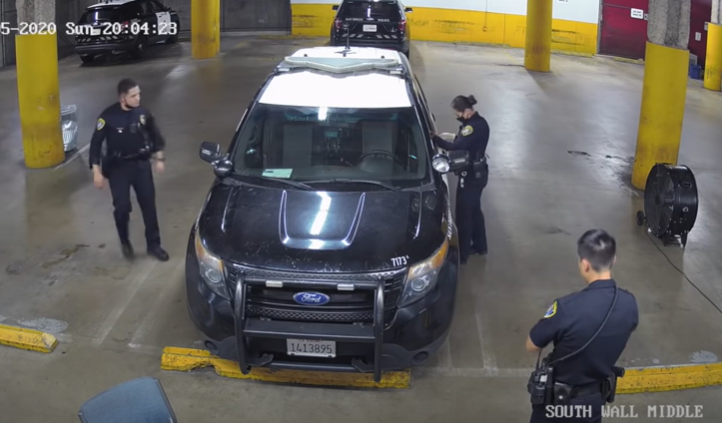 Days after San Diego police shot a man who slipped out of handcuffs and fired an officer’s gun in the underground sally port at police headquarters, officials released video Wednesday of the moments surrounding the shooting.

Police said the man, Keith Bergman, 25, fired a round before officers shot him at least once in his torso. He was expected to survive.

Officers arrested him about 6:20 p.m. Sunday after a disturbance at the downtown Westgate Hotel, where he threatened a security guard, police said. Bergman was taken to headquarters on Broadway in downtown San Diego, where he was left in the back of a police vehicle while an officer filled out paperwork to book him into jail.

Surveillance camera footage shows an officer walking up to the parked SUV just after 8 p.m. The officer opens the rear door on the driver’s side, then shuts it immediately. Police said the officer noticed Bergman had slipped a hand — his left, according to video — out of the handcuffs.

Three other officers then walk up to the SUV. Suddenly, the four officers draw their handguns and spread out, surrounding the vehicle at gunpoint. Police said the officers realized Bergman had a gun — which they said he grabbed from an officer’s backpack in the rear of the SUV after he smashed a glass barrier.

Body-camera footage shows an officer, with his gun and flashlight pointed at the SUV, repeatedly tell Bergman to show him his hands.

The officer continues to press Bergman to show him his hands. “We don’t want to shoot you. Nobody wants to shoot you,” the officer tells Bergman.

Moments later, the officers back away. Some take cover behind concrete beams.

Police said Bergman fired a round from the rear of the SUV. Surveillance video shows debris flying into the air. No officers appear to be in the line of fire.

Seconds later, surveillance video shows, Bergman reaches through a shattered rear-door window with a bloody arm and opens the door. He exits and tries unsuccessfully to open the rear hatch, with the backpack over his right shoulder and the gun tucked in his waist.

The officers were placed on paid administrative leave while the Police Department’s Homicide Unit investigates the shooting, per protocol. The unit’s findings will be turned over to the District Attorney’s Office for prosecutors to determine whether the officers should face criminal charges.

Following prosecutors’ determination, the Police Department’s Internal Affairs Unit will investigate whether officers violated any department policies, and the department’s Shooting Review Board will evaluate the officers’ tactics.

The shooting marks the second in recent weeks in which police have quickly released video and comes at a time when policing is under scrutiny across the nation in the wake of the a string of killings by police, including the May 25 death of George Floyd.

In San Diego on June 27, two officers fatally shot a man who pulled what police said was a gun on the officers. Police said Leonardo Ibarra, 25, was wanted in connection with a robbery. The Police Department released video of that shooting the next day.

Updates:5:52 PM, Jul. 08, 2020: This story was updated with additional information, including the names of the officers who fired their guns and the man who was shot.