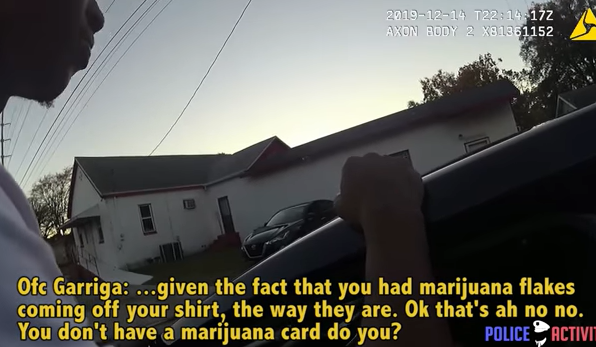 Johnson was pulled over for not having a seatbelt on. He told the officers he had a gun inside his vehicle. While he was outside his car, he appears to begin to lunge inside the car, and while he’s being shot, his foot is on the pedal and he drives into a fence before coming to a stop.

About three minutes after the shooting, someone in the background says, “Somebody get a trauma kit or something.”

Garriga’s body-worn camera apparently was knocked off during the encounter. He gave a statement to prosecutors that said: “After interacting with the suspect on a traffic stop, I learned he had a firearm in a jacket located on the passenger side of the vehicle. Ignoring my commands to walk towards my JSO vehicle, the suspect forcefully pushed against my chest and dove into his vehicle. I was in immediate fear he was attempting to retrieve his firearm. I dove inside of the vehicle behind the suspect to keep him from obtaining the firearm. The suspect was forcibly digging through his jacket attempting to find his firearm. He briefly stopped attempting to grab his firearm, reached back and placed the vehicle in drive. I heard the vehicle engine and the vehicle began accelerating forward. The suspect immediately reached back towards his jacket and got his right hand around the handle of his firearm. At some point I felt the vehicle crash through the wooden fence and felt broken wooden boards strike my shins.”

This is a developing story. Check Jacksonville.com for updates.