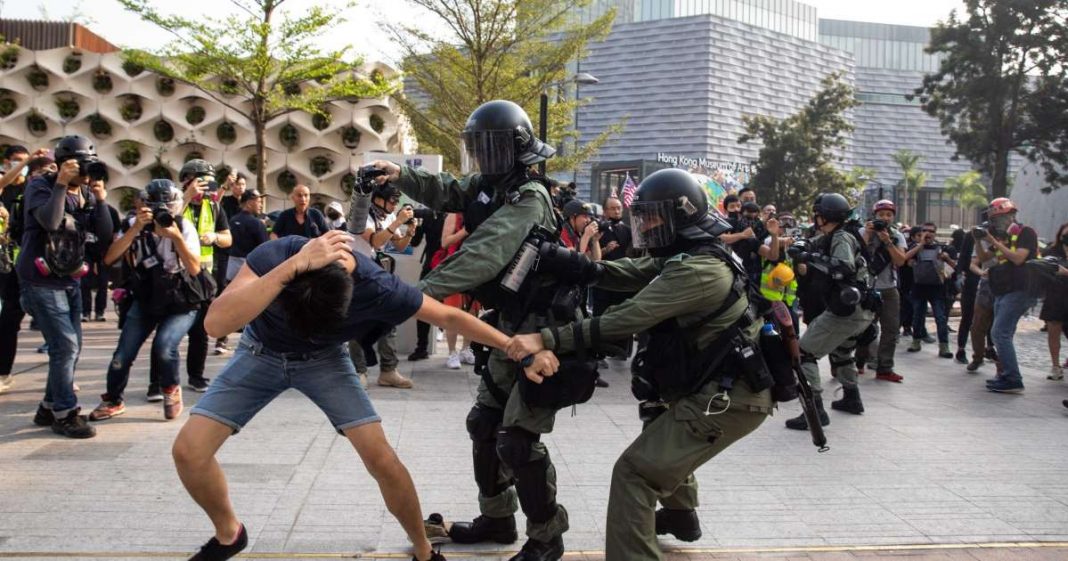 (Bloomberg) — As Hong Kong sees life change rapidly under a new security law, protesters have quickly learned that actions that weren’t worthy of police attention a little more than a week ago could now warrant an arrest, DNA sample and search of their home — in addition to the possibility of jail time.


© Bloomberg
Riot police attempt to apprehend and arrest a demonstrator during a protest in the Tsim Sha Tsui district of Hong Kong, China, on Sunday, Oct. 27, 2019. Hong Kong pro-democracy activists demonstrated for the 21st straight weekend as unrest spreads around the globe, from South America to Europe, to the Middle East.


Hong Kong police made their first arrests last week under a sweeping new security law imposed by China, taking 10 protesters into custody. Six men and four women, ages 15 to 67, were charged with acts of inciting or abetting subversion or secession, police said. At least six possessed pro-democracy and independence pamphlets and poster bills that have been distributed during past demonstrations without triggering arrests, according to lawyers representing the protesters.

Police collected DNA samples from them and searched their homes — both rare occurrences, if ever, in more than a year of pro-democracy demonstrations in the territory, according to Janet Pang, a lawyer for several of the protesters.

Over the past 12 months, the protests have at times paralyzed the semi-autonomous Chinese territory. Hundreds of people have been detained, had their mobile phones confiscated and, in some cases, the information stored on them collected. Pang said she believes it is the first time genetic data has been taken from protesters arrested on minor charges.

“It is unnecessary, intrusive and disproportionate,” she said. “I don’t know why they had to take DNA samples. We don’t know what kind of database they’re trying to build which might be sent back to the central government in Beijing.”

Since its introduction last week, the legislation has sent a shudder through free speech proponents and prompted activists to dissolve political groups and shut down social media accounts. Hong Kong on Monday asserted sweeping new police powers — from warrant-less searches to online surveillance to property seizures — that risk spooking businesses.

Hong Kong police have had the authority to collect DNA samples for more than a decade, but it was typically only used in assault or drug cases, Pang said. The few protesters who had DNA samples taken from them by police had been charged with more serious offenses including weapons possession and attempted arson, she said.

The move is a show of force from Beijing, which drafted the new security law behind closed doors, leaving residents of Hong Kong bracing for its impact and confused about how it will be applied. China already uses DNA data to keep track of its Uighur population, something critics argue is used for racial profiling and systemic discrimination against the ethnic group.

It also represents a challenge to the protesters’ efforts to remain anonymous — which has included wearing masks or destroying surveillance cameras — to avoid retribution at their jobs or schools.

“It seems to be uncalled for,” said Charles Mok, a legislator who represents the technology industry, who described the taking of DNA samples as “almost unheard of.” “The purpose of the collection is unclear, and given the often arbitrary nature of these arrests in recent months, such collection and possibly permanent storage of DNA data is worrisome and lacks oversight.”

The U.S. and the U.K. have accused Beijing of violating its promise to maintain the city’s semi-autonomous territory for 50 years. Both officials in Beijing and Hong Kong have repeated assurances that the laws would only target a small number of people.

Asked to explain the purpose of collecting the DNA data on protesters, Chief Executive Carrie Lam’s office directed all inquiries to the Hong Kong police. Police said that under existing law, officials have the authority to take “non-intimate” samples of DNA from the 10 who were arrested this week.

The police said the samples were taken to prove — or disprove — that those arrested had committed the offenses. A spokesperson declined to elaborate.

Pang said the new law has emboldened Hong Kong’s police. When she complained about the swabs, she said police officials told her to ask for a judicial review if she was unhappy.

“The police think they have this new powerful weapon, this new law to do whatever they like,” she said. Because of its newness and the broadness of its language, Hong Kong’s lawyers will struggle with its application, she said.

Hong Kong is already a heavily surveilled territory, with tens of thousands of cameras installed across the former British colony. Anyone older than 11 must hand over biometric data to receive a national ID card, and since the middle of this year, anyone entering Hong Kong from overseas had to produce a saliva sample to test for the coronavirus.

The Hong Kong government hasn’t said what happens to the data from those samples, and Mok has repeatedly tried to get those answers.

He said the new legislation overrides some of Hong Kong’s own laws, so whatever legal guidelines officials could have referred to in the past for disposing of the saliva samples and their data may no longer apply. “There is a consistent lack of transparency and most of all, a lack of trust in the government, which is still the biggest and most basic problem of all,” he said.