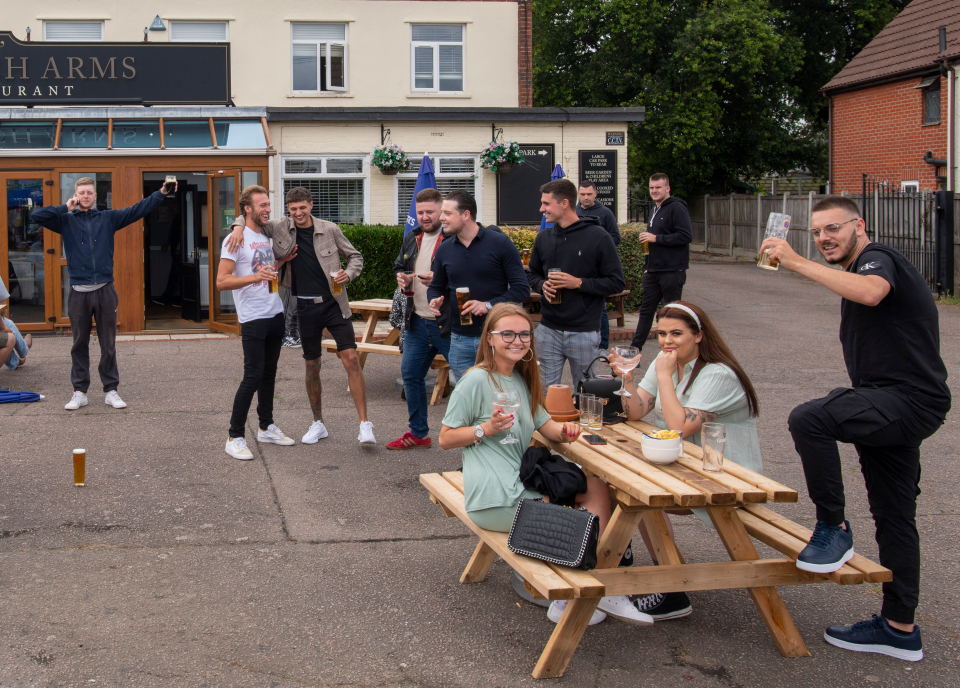 A COP has warned of a second coronavirus wave after revellers carried on the party today after Super Saturday.

The social distancing regulations were ignored by many partygoers as pubs and bars threw open their doors for the first time in three months due to the coronavirus outbreak.

Cities across England were packed with drinkers on their first night out in more than 100 days, and pubs were packed today as pubgoers enjoyed a drink in the sun.

But with social distancing measures, which say people must keep at least one metre apart while they are out and about, seemingly widely ignored, fears of a second Covid-19 wave could now strike.

“If today was anything to go by the second wave won’t be long in the making!”

That message was echoed by Police Federation Chairman John Apter, who said he had dealt with “naked men, happy drunks, angry drunks, fights and more angry drunks” while on duty in Southampton.

He added “What was crystal clear is that drunk people can’t/won’t socially distance. It was a busy night but the shift managed to cope. I know other areas have had issues with officers being assaulted.”

A former government chief scientific adviser has also warned Britain risks another 27,000 coronavirus deaths between now and next April if ministers do not focus on reducing the rate of infection to zero.

Sir David King argued such a number of deaths is ‘likely’ under the Government’s current approach to tackling the deadly outbreak.

He told Sky News today: “What we are saying is 27,000 excess deaths are likely between now and next April, if the expectation by the Chief Medical Officer that he would be surprised and delighted if the UK is in the same place next spring.

“If he’s correct then we would still have around two to three thousand new infections in England per day and that is the number of deaths that would follow from that.

“Now, quite clearly, what independent Sage is calling for is first of all this is almost entirely preventable and absolutely unacceptable, it’s immoral but let me also add in response to your question to the previous speaker, it is best for economic recovery.

“The quicker we can get down to zero Covid UK, the more quickly we can get a full economic opening of our economies right across the United Kingdom.”

Health Secretary Matt Hancock though said the biggest easing of restrictions so far had been a “success” and claimed the drinkers had “very, very, largely acted responsibly”.

Some pubs were forced to shut after “major disorder”, while boozy Brits were also filmed fighting in the streets.

Photos from London’s Soho showed packed streets into the early hours of Sunday.

One reveller said: “We’re clearly not socially distancing, but it’s kind of fun.”

Rafal Liszewski, a store manager at Clonezone on Soho’s Old Compton Street, described crowds in the area on Saturday night as “out of control”.

“Around 1pm crowds started to arrive… quickly everything got out of control and by 8-9 pm it was a proper street party with people dancing and drinking,” the 36-year-old said.

“Barely anyone was wearing masks and nobody respected social distancing… to be honest with that many people on one street it was physically impossible.”

Meanwhile pubs in four Nottinghamshire towns were closed early due to bad behaviour, and four people were arrested.

Inspector Craig Berry from Nottinghamshire Police said: “Officers were quickly on the scene to deal with a number of alcohol related anti-social behaviour reports including a smashed window and minor assault.

“As a result four arrests were made by officers and we supported licensees who chose to close their own premises.”

“If today was anything to go by the ‘second wave’ won’t be long in the making.”

This block contains unexpected or invalid content.ResolveConvert to HTML

Revellers were also filmed fighting in a beer garden in Tamworth.

A pub in Narborough, Leicestershire, also had to shut early after a punter was assaulted and suffered neck injuries.

Meanwhile a vicious brawl broke out on the High Street in Brentwood, Essex, where another four people were arrested.

“4 people arrested. 2 of my team have arrested and are currently on the way to custody.”

Devon and Cornwall Police received more than 1,000 reports, most of which were “drink-related”.

The Metropolitan Police said there were “no significant issues” across London on Saturday.

It came after Boris Johnson warned punters “don’t let us down” as he urged them to stick to social distancing.

Excited Brits hit pubs across England for Super Saturday as locals reopened after a four-month lockdown.

Drinkers were sinking pints all day as pubs threw open their doors from 6am – with the revellers largely sticking to the rules and keeping safe.

Some spots, like Borough Market in London, were packed with punters in large groups getting stuck into Super Saturday.

One eager Brit downed a Jagerbomb live on BBC News as he celebrated pubs reopening.

The cheeky punter told the amused presenter “cheers” as he raised his glass and then sank it in one at 11am.

Punters had queued outside pubs ahead of the early morning start before tucking into breakfast bevvies.

Ben said he’d been craving a pint since the start of lockdown, adding: “We walked past and saw the lights on and got ourselves booked in.”

Andrew Slawinski, 54, had a Guinness at 9am — and said his first pub pint in more than three months was “gorgeous”.

Supping it at the Toll Gate in Turnpike Lane, North London, he added: “It’s like winning the League.”

The Prime Minister urged Brits to be “sensible” and stick to the rules, despite the restrictions being relaxed – and he threatened more local lockdowns if Brits don’t behave.

But Health Secretary Matt Hancock said today: “Overall I’m pleased with what happened yesterday, it was really good to see people out and about and largely social distancing.”

Pubs shut their doors when they were ordered to temporarily close amid the pandemic, but the Government gave the green light to start serving again yesterday.

Restaurants and cafes are also allowed to start serving customers again and not just for takeaways.

We’ve also reported on a new map showing you which beer gardens will be open this weekend.

Pubs have been kitted out with screens, posters and floor markings to help keep customers safe.

But Greene King pubs are not due to return and welcome customers until Monday – to give landlords and managers enough time to make sure branches are “Pubsafe” – or Covid-19 secure.ImageUpload an image file, pick one from your media library, or add one with a URL.UploadMedia Library

PUBS: Screens up to protect staff and tables a metre apart, with one-way systems. Table service or app ordering in place. Up to six people can sit outside but if indoors you can’t mix with another household. Live music is banned and shouting is not encouraged. Booking tables in advanced is required in many spots.

EATING OUT: Cafes and restaurants are now open, but must keep distancing in place. Again no more than six to a table, and screens and one-way systems should be in place. Most places will only take bookings and only table service is allowed. Most venues will only allow contactless or app payments.

CINEMAS: Showcase is the only chain reopening all cinemas today. There will be allocated seats, online booking and staggered film times and cinema-goers must download tickets.

WEDDINGS: Marriages and civil partnerships are allowed only 30 people, including the couple, witnesses and officiants. Small socially-distanced celebrations should take the place of receptions. Only two households can be close indoors and up to six people outdoors.

DAYS OUT: Theme parks, adventure parks and funfairs can open along with zoos and safari parks. But water parks and water rides have to stay closed. Tickets should be bought online and a face covering is needed.

People living near the English border in Wales had to watch on as pubs open just miles away – with their locals still locked down until July 13.

Those within five miles of an English open pub could visit under the restrictions in Wales, but the First Minister Mark Drakeford begged people to stay “safe”.

Statistics from the Night-Time Industries Association (NTIA) revealed 31 per cent of bars, pubs and restaurants stayed closed on Saturday.

Chief executive Michael Kill called for more support for the industry from the Government and said: “Our members feel stuck in a bizarre tug of war between government, licensing and planning regulators and the police.

“But no-one knows which rope to pull and in which direction, leaving businesses stranded in the middle with no way to move forward and out of this mess.” 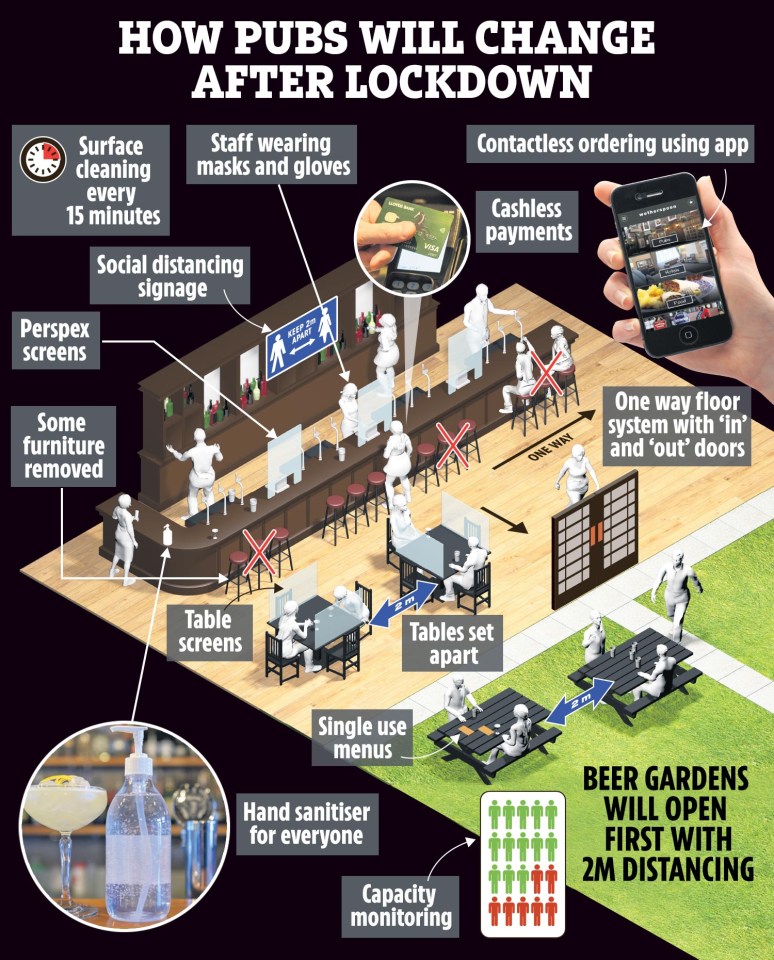 But going back the local won’t be the same as it was before – you’ll have to stick to tough new rules to keep everyone safe during the coronavirus pandemic.

Mr Johnson bluntly told people not to “blow” it, as distancing is still in place, groups of more than six still cannot mingle and masks should be worn in enclosed areas where possible.

STICK TO THE RULES

People will only be allowed to go out to the pub with one other household at a time.

And the lead member will have to leave their contact details with the pub just in case there’s an outbreak, or they end up near someone who later tests positive for the virus.

Those details will be destroyed by the pubs after 21 days.

The Sun revealed this week pubs will be allowed to show the football.

Anything which encourages people to raise their voice shouldn’t be allowed – because of the potential to spread the virus through droplets in the air.

And people in Scotland will have to wait a little longer before they can enjoy a cold pint at their pub – as beer gardens aren’t meant to open until 6 July.

Indoor restaurants and pubs can open their doors from 15 July, too.